Escaping from World Reality.........just down the hill! 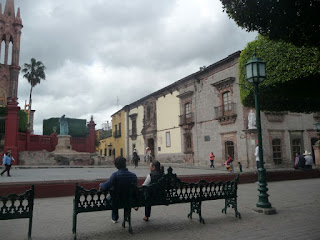 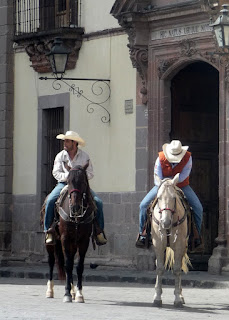 Whenever I "need" to run away to "be" in Mexico, I go to the jardin in San Miguel during the week.

Although one never knows what to expect, it is a great place to sit on the wrought iron benches and take in every day life in Mexico.

I finally got there yesterday.  It was refreshing and as calming as a two hour massage session.  I could feel my blood pressure calming, the longer I sat there and observed.

Not many people.  Just enough.  Then, two horsemen rode in and stopped adjacent to the statue of Allende, in front of his house.  They just sat there for quite a while taking in the scene of the clipped ficus trees, the green plants and the very few people.

Other men were removing the barricades that had been used over the weekend for all the various parades and festivities that occurred.  The pole that was used by the Voladores from Papantla is still up, but will be taken down one of these days.

As I sat there a few friends that I have not seen in quite a while stopped by the bench and we caught up on news with each other.  Then another dear friend sat down and we talked for quite a while......but not about weighty issues, just every day life things such as her cat has cataracts and the construction going on around both of our houses.  Just kibitzing about this and that. 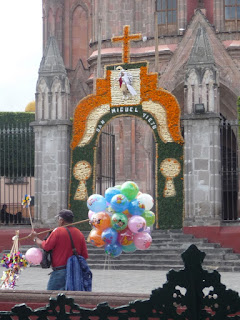 The ubiquitous balloon seller was there when I looked up from talking.  It is amazing how many balloons and pull toys the children who are visiting buy from this man.  Fun to observe.

My friend and I continued to talk.  Then the church bells began to ring and ring and ring.  The boys who make them ring were hanging on for dear life as they made them swing to ring!  Simultaneously 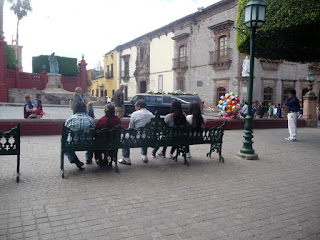 we saw men walking with huge floral arrangments heading for the Parroquia and then a hearse turned the corner with a quiet procession of solemn friends and family walking behind the hearse. Never have I 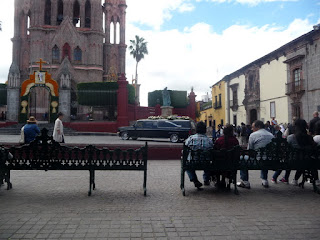 seen such a new, shiny, modern hearse in San Miguel!  It pulled up in front of the Parroquia.  All
the people stood reverently until about ten men pulled the casket out and took it up the stairs and into
the church.  The bells were still ringing but stopped once they entered the church. 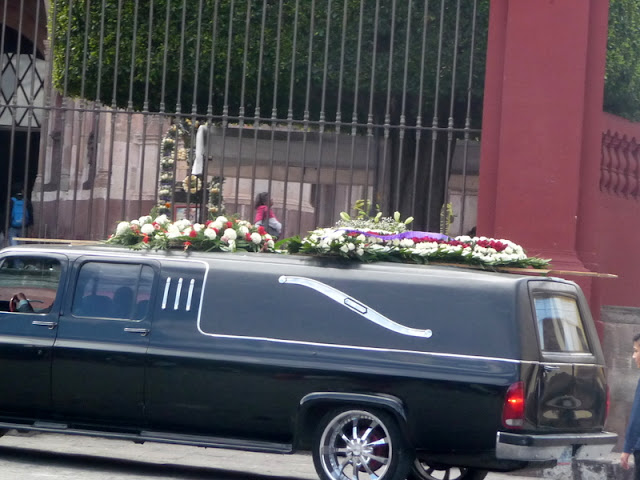 As I always say, one can never sit in the jardin without something happening.  Today was no exception.

I left after about an hour and a half.  Totally content to know that whatever chaos is going on in the rest of the world, some things remain the same.  And, that is life in San Miguel.  Halleluia.

That must have been someone rich/important in that deluxe hearse. The most moving funeral I've ever seen was on the Salida a Celaya, by the Real de Minas Hotel. It consisted of a group of people carrying a pine box on their shoulders, on the way to the nearby cemetery. The only luxe touch was a mariachi band. Some things you can't do without.