Hotel Agua - The Hotel down the Hill!

Many times over the years I have written about the abandoned hotel down the hill.  The one that
Club Med started in 1982 and abandoned in 1983 due to flooding.  It has sat there until it was
purchased almost a year ago by a hotel group in Mexico City called, of all things, Agua Hotels.

Honestly, I laughed out loud when someone told me their name and that they were going to open that hotel beneath the presa (reservoir) and name it Agua Hotel.  I knew then that they had not done their
"due diligence" or they thought they could outwit Mother Nature.

I have the photos to prove the flooding.  Here is one from 2010 which I'm told is not as bad as the flood in 1998 that killed many people who lived along the arroyo that goes through town. 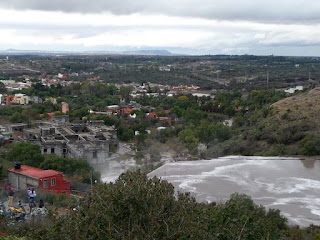 In this photo, eventually the water was going through that window at second floor level!

There have been workers putting impermeable paint on the roof along with jackhammers to make deep holes (for what I have no idea) and it appears that they are trying to add rooms outside the main structure.  But, until they dealt with the presa above them, none of that matters.

Here are a few photos from this morning showing the rushing water and the flooded areas of the hotel.  If you look closely, you can see the big white truck that is submerged.  It has been for two days.  You'll also notice that there are no workers at all.  Yesterday there were lots and they looked over the side of the roof and worked on the roof.  Today, nada. 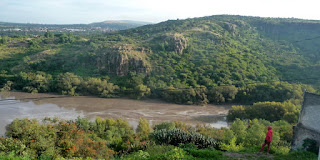 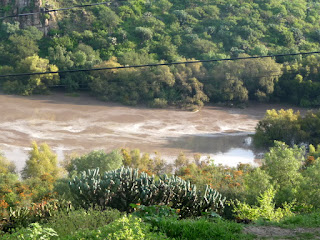 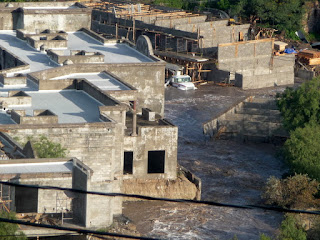 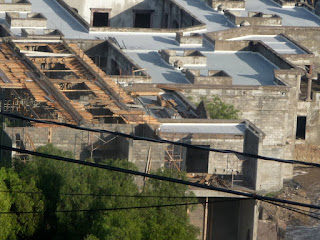 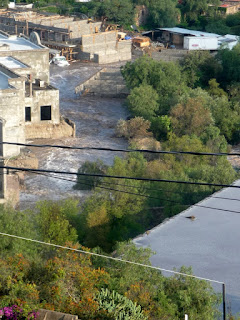 In the original article that I have saved from the Houston Chronicle in 1982, it was announced that the property for Club Med would be a place to search archaeological sites in the area.  I have a feeling  that some day, thousands of years from now, that will be the purpose of this mass amount of concrete.

The wife and I resided at Cerrada de Pila Seca #8 -- and we lived 'n loved SMA for 24 years. Signed up with the 24-hour club and intended to never receive a rebate -- but we have outlived it all, so far!! You can read my blog online -- it's "Ole Guy's Ramblins" on WordPress -- just google -- I've blogged mucho about SMA and Mexico. Buena suerta y disfruta!! Emiliano

Emiliano, I'll check it out! Thanks for commenting.......