The lack of construction activity, during the flooding of the grounds of the hotel that is being restored at the bottom of the hill, did not last but two days.  Then the workers were back on the roof to add
what would be called an overhang at the front of the rooms on the second floor.  Most work is going on on the second floor exterior...........

Others were trying to dry out the engines of the large flooded trucks who sat in the floodwaters for days. And then, the trusty jackhammer guy and the bulldozer showed up to attempt to create a mountain of dirt on the side where the arroyo is located. You can see the high berm that they are creating.  You can also see that there is still standing water! 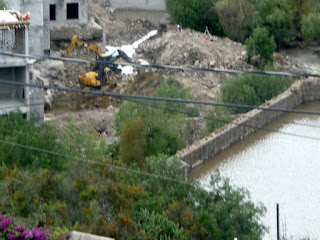 The problem with where they are building the berm is that that is not where the water came from to flood the grounds.  The wall of the presa that shows in this photo is what was breached and  caused a white water river  to pour through the grounds and the street in front of the property to the arroyo. 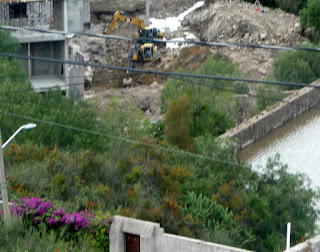 If you look closely, that wall is buttressed to prevent it from collapsing.  The problem is is that that wall is probably 20 ft in the air from the ground or more.  It seems to me that it would be easier to dredge the presa in the dry season when people can walk across it and then lower the dirt level INSIDE the presa by about 8-10 ft...........I'm not an engineer but common sense tells me they don't want to build a berm twenty feet in the air near that wall to prevent the flooding. 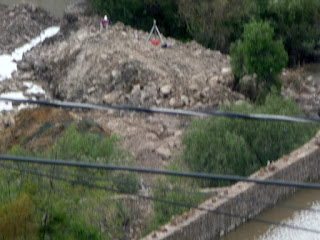 With the amount of workers over there, it appears to me they are trying to get it completed for high season which goes from November til the end of March.  IMHO, that is doubtful.

When I was designing and building restaurants, resorts and retail in the USA and Mexico, everyone wanted their project finished by the 15th of December, no matter when it started.  It often did NOT happen.  From my viewpoint, it might be open by February or March but surely not in two months.
I wonder if they will be granted an occupancy permit.

Hopefully, whoever is in charge has been informed where the flooding actually came from and some radical, knowledgeable architectural/engineering firm is working on a solution.

In the meantime, I'll continue to stand on my roof terrace and shake my head in disbelief as they continue to move dirt first here and then there and then everywhere.  All the while as the other guy
jack hammers from 8 am til dark.  It does reassure one that San Miguel is definitely built on rock!


(By the way, you can click on the photos to enlarge them to see the details.)
Posted by Babs at 12:59 PM

Interesting, I hope they are successful. Meanwhile it makes for cheap entertainment...

I thought they had abandoned this hotel precisely because of the problems with flooding...

Al, Club Med worked on it from 1982-83 and shut it down when it flooded. The new developers have put up a "berm" but the wall of the presa is far above it and that is where the flooding comes from..........boy, are they in for a surprise! There is a fool born every day.