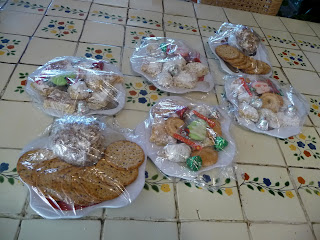 While I was baking cookies - sand tarts, lemon bars and sugar cookies along with cheese balls this week, lots of memories flooded me of all the years I've been doing this.

My mother seldom cooked, so this tradition wasn't handed down.  I believe it began when the kids were in school, money was tight or non-existent, and the kids loved to help in the kitchen.

We would start around Thanksgiving and make "goodie" plates for the teachers, the mailman,  good friends and anyone else that we wanted to say Merry Christmas.  It was fun.  There would be powdered sugar everywhere.  Sprinkles and dough stuck under fingernails.  Flour on the floor.
But, oh, how much fun.  The kids loved it.

It seemed the people who received these goodie plates did also.  In the past they were larger and full of things like fudge, Mississippi fudge cake, little pecan pies, along with the things that are now there.  The favorite of everyone was the buttermilk pralines that were made. I haven't made those in years.

Each child, even while off at college would contact me and say, "Now we ARE going to make?",whatever was their favorite.  I had possibly decided not to make that that year, but I never told them that, if they asked to make it with me.  So the whole repertoire continued.

Exit adult children.  Enter grandchildren.  The same dough everywhere along with flour etc.  In fact, my oldest granddaughter, Jessica was on the front page of the Houston Chronicle Food Section one year with the old mixer, the beaters and the dough.  I had mentioned our family tradition of making cookies together and the Food Editor, Ann Criswell dispatched a film crew. I think Jessica was in kindergarten or first grade at the time. What fun that was!

So, here I am, doing this alone.  No grandchildren to be with me to build memories and traditions.
Not a happy time.  In fact we've been told that we won't even get to see the children on Christmas to give them their gifts.

However, I'm soldiering through and making things that I hope a few friends will like.  Not as extensive as in the past.
Still made with affection and love however.

Happy Christmas Barbara. And hoping that the grandchildren will be back for future Christmases.

Thanks Rachel - good to hear from you! Me too......about Matilda and Sebastian.

I didn't even do any baking, (not really my strong suit anyway)I bought a big tin of Walker's shortbread at Costco. I remember my mother baking for weeks before Christmas. She would put trays of gumdrop cookies, shortbread and rum balls in the basement freezer and my brother and I would sneak downstairs and eat them frozen. I think she often had to make more.

I hope you will at least be able to see the kids on the 6th for 3 kings day. Merry Christmas Barbara.

Your grandchildren are extremely fortunate. You make every day with them as special as Christmas. You are not a slave to the calendar.

Ha Shannon - Your Mom knew! I would see that the wrap over the cookies was up and that a few cookies were gone or something else most mornings and just smile!

Steve, what a kind thing to say! I appreciate it more then words can say and hope you're right.

Your baking is a great tradition. Soldier on. You may never know how your gifts may help someone experience a nicer, kinder Christmastime. And there's always another day to enjoy your family. Last year I had a very quiet Christmas without family. It was nice. I didn't accept other's invitations for the holidays. Sometimes, quiet can be nice.

Your baking is a great tradition. Soldier on. You may never know how your gifts may help someone experience a nicer, kinder Christmastime. And there's always another day to enjoy your family. Last year I had a very quiet Christmas without family. It was nice. I didn't accept other's invitations for the holidays. Sometimes, quiet can be nice.

Merry Christmas Barbara! Your blog is so inspiring! I agree with Steve, your grands are extremely fortunate to have you. Freeze those little goodies and celebrate next time they come for a visit.

On another note, I anxiously await your next quilting project. I am in love with all the colors of Mexico. It is so exciting!!!

Merry Christmas to you and Todd, Shannon. I'll be gone by the 6th...heading to the beach this coming week. YEAH.

Thanks Laurie - You are so right. I was totally alone last year and swore it would never happen again. Somehow the Universe had another plan.

I'll post some more quilter photos in the future Jennilynn. I'll go to the Modern Quilt Show in Austin in February. Really enjoying this new interest.

Have a safe trip Barbara, and enjoy the sunshine. Remember, you are still very welcome to join us for Christmas dinner. Although I bought the shortbread, I will make a pumpkin pie. We would love to have you!

Thanks Shannon - very kind of you. I'm cooking here for my son and I - he wants cornbread dressing and all the things I used to cook....so will do that. In fact, I've done it so much over the years I can do it without even thinking. Ha, that's a good thing!