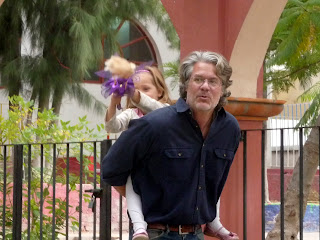 Often as parents we don't take time to say all the things that are in our heart to our kids.  It embarrasses then, sometimes if we try.

This is a good medium to be able to say some of those things.

I can remember back to when I found out I was pregnant with him.  My husband and I were ecstatic.  He had just returned from a tour of duty in Turkey and had been back a few months. What a gift when we knew that another child was coming into our lives.

John was born shortly after my husband's time in the Air Force ended.  We were leaving Alexandria, Louisiana the month after he was born to go to LSU where my husband was entering pre-med.  Our lives in many ways were in transition.

John came home on a beautifuly SNOWY day in Louisiana!  Not typical at all.

Life rocked on.  Raising a daughter and then a son is a completely different ball game.  Whereas my daughter Jennifer liked girl things, John loved rocks, dirt, trees and fishing.

Once we were driving to Illinois, but detoured into Arkansas so he could dig for diamonds at a diamond field.  It actually looked like a potato field to me, but John was determined.  Although no diamond appeared.  It was fun to be there.

In high school John took French.  It changed his life.  A teacher was taking a group to France.  He asked if he could go and I responded that sure he could if he earned half the money.  It was a comment that I thought would go nowhere.  Well, he earned the money, went to France for six weeks and came back, changed forever.

Travel, languages, cultures and people have always been an integral part of his life. He spent two summers backpacking through Europe while in college on his own money.  Once, when he was leaving again I complained that I was nearly 40 and had never been and he had been twice.  He said such a wise thing to me.  It was, "Well Mom, if its important enough, you'll find a way"  The next year I went to Europe.  That comment of his has been a life altering thing for me.  I often remember it when I need to make a decision.

John's life of travel and work was altered forever when his sister Jennifer was diagnosed with leukemia when she was 7 months pregnant with her son Christopher.  Near death, literally, she gave birth to Christopher at seven months and started chemo the next day.  We were all stunned at the news and grateful to have a new baby to love.

John's life was altered because he was tested and was a perfect match for a bone marrow donation for Jennifer.  This is not a little thing.  It requires isolation for a rather long period of time, the procedure and then being available for stem cell donations etc. etc. etc.  He had to give up his career in San Francisco to be available all the time.  He never once complained.  Not once.

He was Jen's caregiver over quite a long period of time, while trying to work too.  Jennifer's husband worked, I and his other grandmother took care of Christopher or we were at the hospital.  It was a difficult time.

Onward our lives all went until Jennifer's passing.  After we all grieved and eventually picked up our lives again, John decided to travel to India. A place he had always wanted to go.  Instead destiny wanted him not to.......it appears.  He came to Mexico to tell me goodbye and met an American woman here in San Miguel who became his wife.

Two wonderful children, Matilda and Sebastian came from that marriage - his only marriage.  Unfortunately it didn't work out and here in Mexico, John works and sees his children when the court mandates that he can.

Again, his courage, integrity, kindness and love of people carry him through.  I'm often stopped on the streets by people who have met John and they tell me what a wonderful son I have.  How kind he has been to them and something generous he has done for them.

It warms my heart, but doesn't surprise me.  He's the kid who always picked a wildflower for me or wrote a card to me that made me cry.

I'm honored to have him as my son.

And you are correct, Babs. He is a son to treasure.

What a beautiful tribute to your son. He picked the right mother.

A very nice tribute to a kid Babs - I am sure based on the quality person his mother is that he is an upstanding fellow.

A beautiful heartfelt tribute from a loving mother to her amazing son. Hope John has the happiest of birthdays.

Your son sounds like a wonderful man Barbara, I would like to meet him. And the kids! Happy Birthday John!

What a great tribute to a great guy. And to you too.

Thanks Vandy. John is a great guy and continues to be under the most difficult of circumstances.