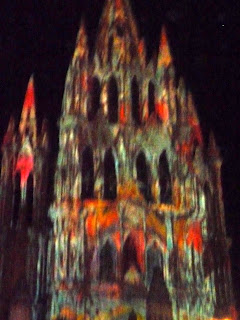 The San Miguel Chamber Music Festival began last weekend. I finally was able to attend a concert last Sunday night of the Parker Quintet. The theater was standing room only. This was their third performance in three nights. During the day they have been instructing and playing with musicians and student musicians in workshops and classes. They admitted they were exhausted.

The melodies and music didn't show any exhaustion however. The more I listened, the more I felt the stress and tension of the last couple of weeks leaving my body. It was magnificent. An hour and a half of pure delight. The group won a Grammy last year for their Chamber Music album. They played two of the pieces of music from that album.

As if that wasn't enough - which it was - I have a friend in town who I walked over to the jardin with so that he could experience the light show on the Parroquia. It is still mesmerizing. This person is a world traveler to all kinds of exotic place. The light show was a highlight of his first visit to San Miguel.

All in all a night to be remembered. Tonight is another night of music with the Miro Quarter. Life is good.

Now how does that compare with my night NOB last night? Don't ask -