It doesn't only happen in Hollywood 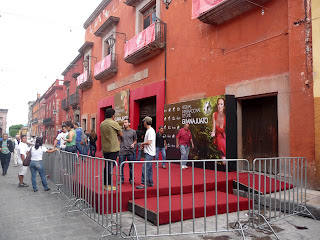 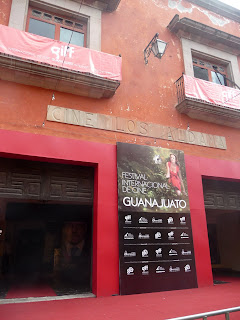 A couple of weeks ago here in San Miguel de Allende there was a free Internation Film Festival sponsored by the State of Guanajuato. The old Aldama theater was retrofitted by the organizers to be used for some events. The theater had not been used since the 1990's.

As I walking down Calle San Francisco there it was, the official red carpet for people to walk on to go into lectures and films. It cracked me up. Of course it was basically industrial strength carpet which I presume is not the quality of the carpet in front of the Oscars, but hey, it was OUR carpet for the event.

Filming was shown all over town, again for free. A large screen was set up between the parroquia and the jardin for people to sit each evening to see something. There were films for kids - you name it, they had it.

But, the piece de resistance was Spencer Tunick. He is a photographer who loves to photograph nude people. About three years ago he photographed thousands of nude people in the Zocalo in Mexico City. This time he photographed all over the streets and in shops of San Miguel. I've seen the documentary film of the shooting with them dodging from street to street so they wouldn't get arrested for.........whatever law that would break.

I would think that you could put into your search engine - Spencer Tunick filming in San Miguel de Allende and come up with at least a You Tube version or something.

A couple of women friends my age volunteered to be filmed. Pretty gutsy. Very cleverly accomplished.

I enjoy photographing nude people too, but only if they're female and well constructed. Alas, I get so few opportunities to do this.