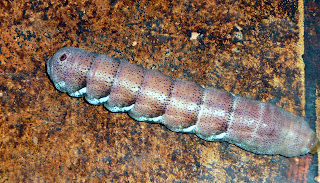 While I was at Casa de la Cuesta the other day, this little guy came inching along across the floor. I was transfixed for several minutes. I couldn't get over how fast he moved. Or how determined he seemed to be to get to the other side of the immense patio.

Even though I was talking to Heidi, the owner of the B&B, I stopped dead in mid-sentence to observe this force of nature.
Heidi told me that these are common on their patio about this time of year. She also told me that it would be one of those large black swallow tailed butterflies that just glide around in my garden.

I so wanted little Matilda to be with me. She is so facinated by all kinds of bugs and insects. When she comes to my house, the first thing she wants to do is look for "rolly pollies" in the garden. Maybe she'll grow up to be a wildlife biologist like her Dad! I toyed with the idea of bring "Senor Inchalong" home with me until this weekend when I hope to see Mati, but, I hated to take him away from his appointed rounds.

Isn't this photo fascinating? Well, it is to me! Is that an eye? Who knows? Can anyone tell me more?

Someone told me recently that butterflies need the struggle to escape from their cocoons to live. If you help them out they die.

WHAT! Well I'm afraid to ask where the other two are......my kids always told me I had an eye on the back of my head to catch them in their antics. Maybe I was a slinky insect in my previous life - ha!

Mike, I saw a time lapse film on the Discovery Channel. It was mesmerizing to say the least.