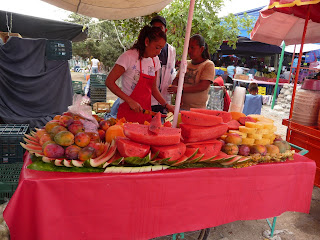 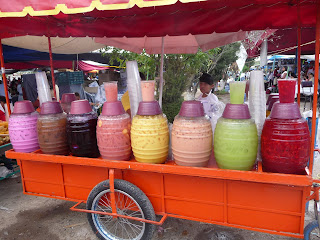 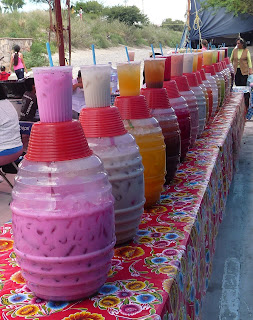 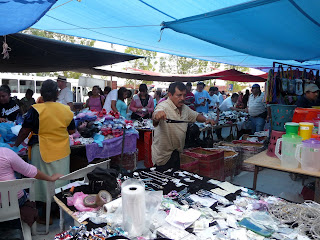 Traveling markets are called tianguis. We have one in San Miguel de Allende every Tuesday. I try not to miss it.

It is a mixture of tables with produce, food, fish, chickens - live and dead - rabbits, ditto. Add to that the tables of embroidery and thread, blender parts, every imaginable electrical thingy, tools, new shoes, new clothes. If you can imagine it, you can usually find it if you look hard enough. The photos above are the fresh fruit and aqua frescas for sale. The last photo is a vendor shortening a belt for my man. He was so intent on making it just right as we watched.

My favorite thing to look through and for is the used clothing. I know, at first you say uuugh. But then when you find a pair of gorgeous Ann Taylor slacks for forty pesos ($3.20 US) or a great Chico jacket for same price or less, you're hooked. It has been a fun discovery for me. I'm so hooked on finding my clothes there that I hardly EVER buy new things in the USA or Mexico any more. Well other then intimate things. It is such a deal.

The NY Times had an article just a day or so ago about a challenge of selecting and wearing only six items of clothing for a period of thirty days. It is a slap at consumerism. One that is much needed. One of the women that was interviewedfor the article was astonished that not only did her husband not notice but neither did anyone at work that she wore the same clothes for that period. I bet it will change her way of thinking about "enough is enough".

In 1991 I went to Puerto Vallarta to handle a design project which was the remodel of a residence in Gringo Gulch. It was the first home built by an expat in that "village" at the time. It was so noteworthy that National Geographic sent a photographer in the mid 50's to photograph the house and a story was written also about this "phenomena".

With me I brought one small suitcase. Estimating I would be there a week to ten days, it seemed that was all I needed.
It turned out to be a six week jaunt. I lived out of that one small suitcase without buying anything. It was a light bulb moment for me. I realized (one) that I could do it, and (two) that I didn't miss anything back in Houston.
It was the beginning of the change in me to a more simpler life.

I followed that, when returning to the USA, by reading a book about a woman who said, "Why do we need more then six pieces of clothing?" Wow, to me that was radical. But again that reconfirmed that it could be done and I wanted to do it.

Well, I must admit, until I moved to Mexico, I didn't fulfill the "simpler life". But now I live in a house with one closet. No I don't have only six pieces of clothing, but I sure have much much less then ever before. AND at much less cost.

The surprising part of all of it is that I've never been more content in my whole life!

Babs ~
As a fellow Sanmiguelense (?) I've been enjoying your blog for a while.
I dscovered what you are writing about is true when my husband and I had to fly up to the states on a rescue jet last year with little notice. We were only allowed one small bag on the plane. I brought two outfits plus what I was wearing and managed with that for a month before I was able to get out to buy something else to wear. Big lesson learned.
Back here in San Miguel I think of my clothing as mostly "play clothes" like when we were kids.
Love the Tuesday market, but don't have the patience to look through the piles of clothes for bargains.

I LOVE IT! I've always been a clothes horse, and still am, but am reconsidering as I move into another phase of my life. Kudos to your experiences and wisdom.

I have learned the same thing on my trip north. Due to my broken ankle, I could not bring clothes north with me. When I arrived, I bougt as few things a I could. I simply wear a black shirt and black slacks to work each day. Of cours, I have four slacks and six shirts for rotation. But it suits me fine.

When I went to Australia to teach for 6 months, I took one suitcase of clothes and a footlocker of teaching material and books. I lived out of that suitcase for 6 months and only bought a jacket and warm socks (it was cold in July) and a couple of shirts when it got warmer. I was really tired of those clothes when I got home and had to continue wearing as I was again in winter. Maybe for 6 weeks but I did prove to myself I could to it.

Mexico puts new meaning on dress casually - however the folks here are always very clean and neat looking - how do they do it?

I am quite sure you always look good amiga!

Wow, this is really timely, I keep looking at all the clothes that I have and don't wear. I am getting to the point that I will be paring down my wardrobe too. I don't need all this stuff! It's weighing me down.
regards,
Theresa

A tianguis appears on the street outside our Mexico City apartment every Saturday. I really like it. No clothes on sale, however.

Steve: Why didn´t you toss a white shirt into the constant black? Just for variety.

I have a clothing theory. If something sits in your closet for a full year, and you have not worn it, toss it. You will never wear it.

I signed up for that "clothes buying diet," and refuse to buy any duds for 30 days. Imagine, if keeping our wardrobes to six outfits caught on, what we women could do with all those walk-in closets.