Life Can Be a Three Ring Circus 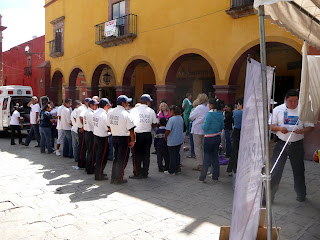 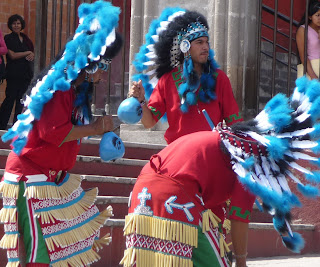 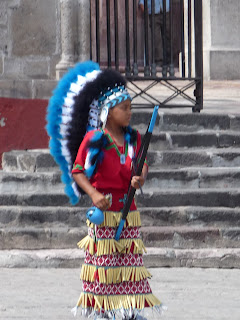 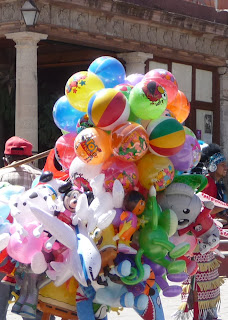 Since I last wrote, a week ago, so much has happened that I don't even know where to begin - so I'll try to only touch the highlights.

The houseguest is firmly ensconced here with me and has been for a week. WE have two more weeks of fun in San MIguel. Then we leave to go back to West Virginia. It's interesting how different things are when you have a companion to go places with, and GO we have. The calendar is full of yellow highlights of places we've gone and things we've already done. Just this past weekend we went out to Patsy's Place for a delicious lunch and a great performance by John Davidson. Monday night we were off to hear a jazz tribute to Miles Davis - very enjoyable also. Tuesday Market is always a hoot and unexpected things are ALWAYS seen. Like chickens feet laying right next to fish.......Sorry I didn't photograph THAT.

The photos above were from last Friday. As I've said before, no one ever knows what to expect when you come around the corner to the jardin. That day was the contrast of modern CPR being taught to citizens while ancient dances were being performed in honor of the Virgen del Carmen in front of the Parroquia.

Now even though I grew up Catholic, I have never heard of the Virgen de Carmen. There are so many saints and virgens that are honored here that were not part of our religious lessons - hard to believe.

So, the tenant moved out without even saying goodbye or that that was the day she was moving. Of course she made no provisions to pay any or all of the year's lease that she had signed. She had told me on the 12th she would be moving but that she would let me know when. Then I couldn't ever get any further information out of her. The last she had said was that she would go up to get her mother's belongings as she was moving her to Mexico, but that she would be coming back to the house. Dishonest and sneaky people never cease to amaze me. I had even hesitated to show the house because I was afraid the place she is moving, which is under construction, wouldn't be ready for her when she was ready to move. Oh well.

On that note, I have been truly touched by how many readers of the blog have contacted me. You people rock! A current reader who has read the blog for a couple of years and is now in San Miguel is coming to look at the house this afternoon. Keep your fingers crossed. Wouldn't that be cool?

So, to add to the fun and frivolity of the hecticness, one of the upper windows in the dining room fell out in the afternoon on Tuesday from the high winds, right after I saw the keys in the door of the guest house and realized that the tenant had "flown the coop". What a mess. But dear Sr. Luna came when I called - he's the iron and glass man. What a great guy. I showed him the hole, while watching the dark clouds come closer. He went back to his shop, cut the glass, brought it back, trimmed it to the arch, and badda bing, had it in. Then he fixed a few other things he noticed and that I mentioned I would like to have fixed. Like the fact that the lock on that window had broken and I was holding it closed with a safety pin and a letter clamp. He just smiled, brought his welding torch. So, for a couple of hours work and materials - cost approximately $24US.

Never dull - always in the moment - no point in planning too far in advance - THAT is life in Mexico! I wouldn't have it any other way..........

As you suggest never a dull moment - we had an entire week of Saint Carmen celebrations a week ago (it is another name for Mary mother of Jesus btw).

Bad renters are common - why is that? We are such good renters ;-)

Babs, I hope the prospective renter is an honest person and your faith in renters will be restored.

You're a resilient woman and can be happy alone or with someone, but it is lovely, isn't it, to have someone to share your days with.