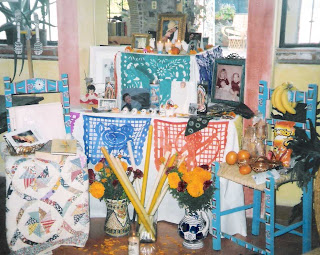 I decided not to build an altar because I reasoned that Jennifer's spirit is with me often. I decided that I didn't need to go through the emotional turmoil that I did when I made this altar five years ago. Whew, it was a difficult thing to do. It took me days. It was like climbing Mount Everest.

Although, once I was finished, a kind of peace descended on me and it became a place of reflection and remembrance for almost a week. I found myself sitting there and touching the things on the altar. Memories flooded back. Isn't that what this time of the year is all about?

Another interesting thing happened at that time. You see the quilt in that photo? Flash, my dog of 16 years at that time, decided that instead of sleeping with me at night, slept there the whole time the altar was assembled. I thought it so strange as Flash never lived with Jennifer. Two weeks later Flash was killed by a bus and of course is now frolicking with Jennifer in the "other world". How cool.

I did sit yesterday and make a list of all the people who have passed through my life, but have passed on. Quite a long list. I thought of each of them and how I contributed to their lives as they did to mine. Then the thought occurred to me that if all those people are in the same place that it is one heck of a fun party going on in the "other world". It causes one not to be so worried about leaving this world and going to the next!
Posted by Babs at 9:44 AM

Thank you for sharing your thoughts about your daughter Jennifer. Even though I was silently lurking, I've read all of your past posts about her, and Flash too.

I specifically remember your touching story about the butterfly flowers in your garden.

I admire you so much for your strength and ability to "process" the unthinkable--the loss of your child--and still revel in the beauty and joy of your life.

You show there really is healing and a way to move forward, even in the face of overwhelming loss.

So my "haven't met you in person yet, but looking forward to it" friend--you are an inspiration, a source of strength, and yes, some laughs along the way too!

Jennifer is so blessed to have you as her mother.

thanks for the beautiful post Barb. I have been through a similar process this year thinking of all of the dear people that have passed though my life. I hope you have a wonderful day. I know that you have many, many friends that love you.

Thanks for the story.

Kathy and I will be in the town where our son grew up on the day that marks ten years since he died, Dec. 2.

Just think of how awful it would be if we did not remember the impact people, especially close people and family have on our lives.....
Glad you decided to remember and sharing!

Barbara, thank you for sharing your story about your beautiful daughter Jennifer. I am sure it was hard for you and I really admire you for doing it and glad that it brought you some peace. I think you are a special person and have a beautiful spirt and it shows both in and out.

You say the altar in the past turned out to be very peaceful for you, so I do not quite understand why you did not do it this year.

Barbara, beautiful post. The Day of the Dead really brings our loved ones back if only in our thoughts.

I'm glad all of you got something for my reminiscing about my daughter. It is very personal and I did debate about writing this post.

Felipe, there was a sense of peace after completing the altar and sitting there looking at it. The installation of it was traumatic.

I am on the "road to recovery" and just didn't want to open the lid of the basket to look at all those things this year again. Maybe I'm being a little selfish in not wanting to be sad.......

I just started reading your blog recently, and have really enjoyed it.

I was so moved by your post about your daughter, Jennifer. I cannot imagine ever losing my own daughter.

I think that the alters are wonderful ways to feel closer to those who have passed, but I can see how it would be a way to tear your heart open again with those awful wounds. I think you were wise to not build another one this year. I hope that you will continue to mend the wounds in your heart and it sounds like you are doing a good job of that. More peace in the future to you.

Babs - I imagine thoughts of whether to create an altar or not are rather like trying to get comfortable in a chair, squirming every which way and never finding a comfortable position.

While only being able to imagine the pain, I have a good sense for it thinking about how I might be affected by the loss of my son.

There is a promise in what I believe that says we will never have to endure more than that which we can handle - at times when those promised limits are stretched, I have to wonder about the scale of pain.

I think the fact that we have an immense capacity to care is a good thing and I am honored to be able to know you well enough to to be able to share some of your pain.

Cheryl and Wayne - Thank you so much for letting me know that the blog touched you.
Calypso - your friendship and empathy always touch my heart. We are a "brotherhood of friends", we bloggers. It is awesome to me how we care for each other having, in most instances, never met.
Many times I said that very phrase, "God gives you no more then you can handle". But he did many times and somehow the spirit survives and returns. It is amazing.