I have reverted back to my former method of crossing over from one year to the other.

In the past, I wrote my Christmas Letter while lolling on the beach in Puerto Vallarta or

some beach village along the Pacific Coast.  With a bit of humor I would say that it was

the first Christmas letter of the coming season.

Well, here I am on January 13th and ready to tell you a bit about what has been going on

in Mexico and in San Miguel with the family and myself since my last post.

two birthdays - John's, a few days before Christmas and Sebastian's a few days after 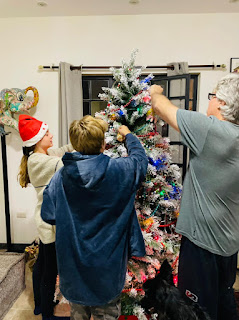 Here's John, Mati and Seb decorating their Christmas tree.  Note a new member in the

family is assisting.  More on this in a bit! 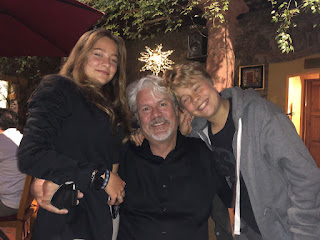 fear of my cane slipping on the wet sidewalks and streets.  But, they did come by here afterwards

for John's favorite lemon cheesecake that I had made for him.......yes, they took the leftovers 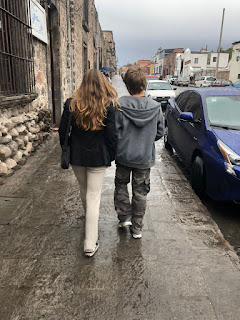 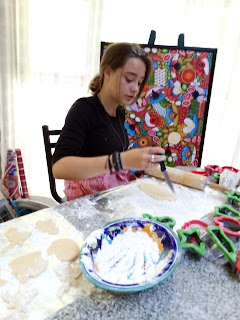 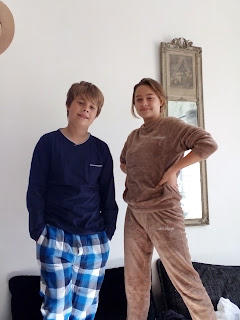 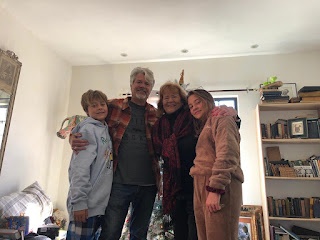 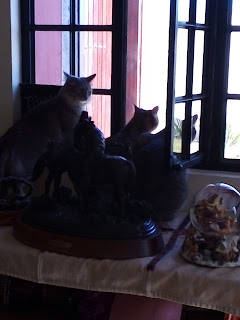 The above pictures are Mati and I along with Seb making Christmas cookies!.
Seb and Mati in their new Christmas gifts - warm jammies!
And the four cats looking out the window at all the activity outside. 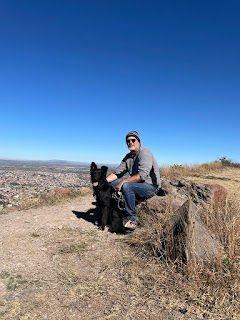 Add to the four cats, now there is an amazing dog named Kali.  A friend needed to find a

who keep Kali in line.  Can you imagine?

I have had a lot of dogs and cats through the years, but, I must admit this is the smartest and

best trained dog that I have been around in a long time.  She and John have bonded and take

long walks up in the mountains almost daily, very early in the morning. 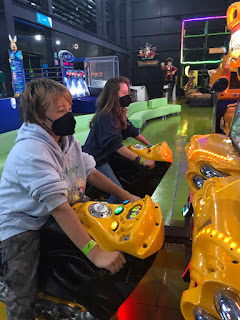 Last, but not least, for Seb's birthday he did NOT want a party but instead wanted to

go to this place in Queretaro, which is about 45 minutes away, to play games.  As

you can see, they were the only people there but they dutifully wore their masks.

No, I didn't get to go for that day but I did see Seb a few days later to give him his

present.  In true "modern" fashion, their words not mine, instead of a cake we had

treats from a new, delicious bakery here in San Miguel.

If I remember correctly, there was a scone, an eclair and a fruit tart! C'est la vie,

So, in spite of Omicron and masks and tippy toeing around to stay safe, we managed to

have family traditions.  Some different then usual, but still enough to honor the holidays

Onward into 2022.  Who knows what lies ahead?  I certainly didn't expect that we would

all still be wearing masks, using sanitizer and distancing from each other.  Every day I hear

from another friend who has covid!  It is really shocking and disconcerting.

Me, I'm staying home and happy to do so.  Yes, every now and then I get a little cabin fever.

So I get in the car and ride around just to see if there is still life out there! I did have to go to

the bank one day.  On the way home, during the holiday season, the traffic was so bad that

I tried using a short cut to get back home and got LOST in San Miguel. Can you believe I

was somewhere that I had never been on a one way street as narrow as a car?  And, since

tourists are lost all the time, someone in a car was coming on the one way street heading

toward me!  Well, that was an interesting experience.  He had to back up because I'm

not good at doing that and the arrow was in my favor.

I laugh now, but to tell you the truth, I haven't gotten in the car and driven around since

Life in Mexico can almost always be a grand adventure, even when you don't expect it.

Retired Teacher said...
This comment has been removed by the author.
8:54 AM

So happy to see that, in spite of the current situation, you were able to spend a happy holiday season with your family. Stay safe!

Living.boondockingmexico! So great to hear from you!
I think of ya'll often and have heard through the grapevine
that you have a place in Las Brisas. If that rumor is correct,
we are very close to each other and should get together......
Let me know!

Hi Bill - We managed to work around EVERYTHING to be able to spend
time together.....it wasn't easy and it wasn't all "traditional" as
it usually is..........some funny stories that I didn't include in
the post......
Sorry yours is messed up right now but hopefully soon ya'll will be
back together!

Get back out there. It is a wonderful world.

My trip in February to Antarctica was canceled by the cruise company and my flight to San Juan last week was canceled by my positive covid test. On Sunday, if all goes well, I will be on an airplane for a week in Oregon.

Bit by bit, circumstances normalize. In truth, my life has been little different the past two years than it was in 2019. That is one of the joys in living in tropical, rural Mexico.

Well, Steve, I'm glad you have no "pre existing" conditions that require you to stay home. I do. Hence, the change in my lifestyle due to conversations with two of my doctors.

I notice your life has not changed. I'm surprised and happy for you.

But, to tell you the truth, other then a now and then desire to go somewhere locally, I'm happy in my casa here. I spend much time in the gardens every day communing with nature and reading. I miss friends and family from time to time, but I'm truly in the " Season of contentment"!