On both sides of The Wall!

The talented and knowledgeable computer man came and hopefully the blogpost

single spaced and others double spaced.   We'll see - hopefully it is fixed.

As the title above says, this post is about two sides of "The Wall".  The one

In November, November 22nd to be exact the big ditch diggers, jackhammers

arrived to begin work.  None of us had any idea how long this would take or if

we would be able to access the "outside" world on foot or by car.  It didn't take long

to realize that neither was going to be possible as seen by the photos below. 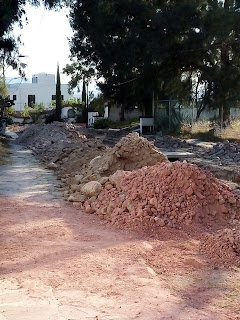 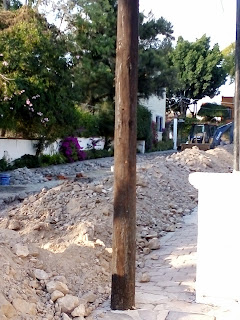 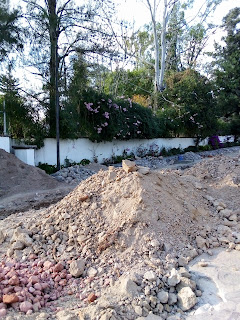 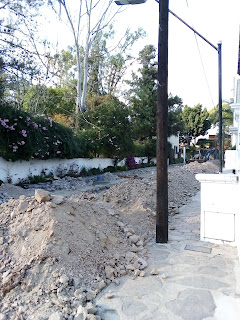 This was prior to Thanksgiving which was the first week.  The sidewalk was still usable.  It went

downhill from there and by the third week, some of us needed groceries. etc and those who delivered

did so on foot, very carefully as there were big holes everywhere.

One learns, living in Mexico, to go with the flow.  My hope was that it would be over prior to

Christmas.  And, actually my hope was realized when ALL was completed by December 9th.

Everyone on this block was astonished and relieved.

the most uncomfortable part of it all.

On this side of the wall, I could still enjoy the garden during their lunch breaks or when they left to go

home late in the day.  Here are a few photos of the gardens.  Enjoy, I sure do! 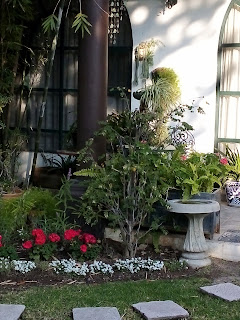 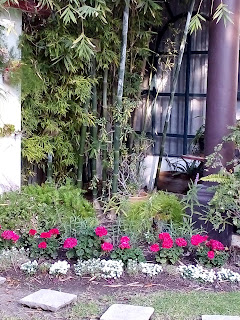 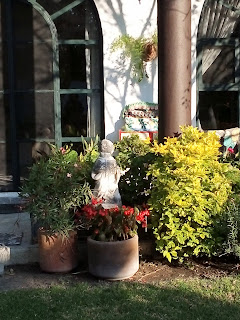 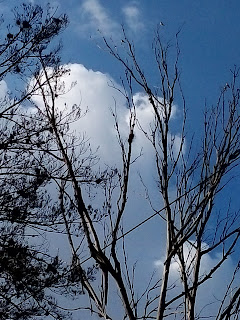 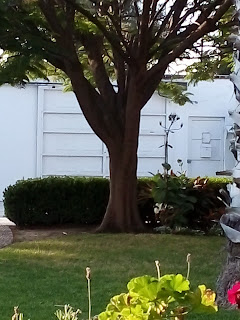 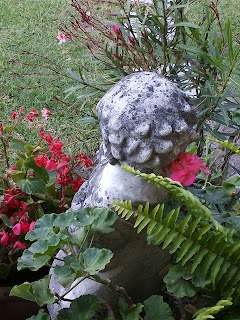 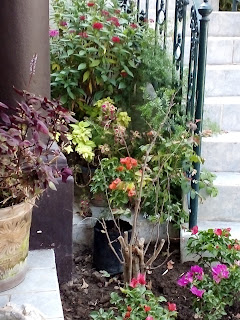 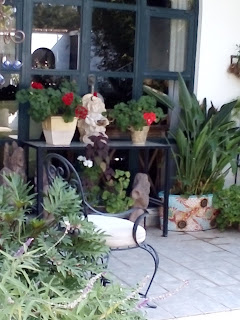 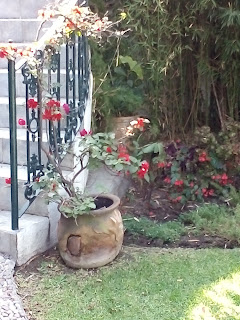 Amazingly, the photos have posted.  The sentences appear to be posting correctly.  Maybe

all the snafus have been taken care of and I can start writing more posts now!

I look forward to seeing that garden before too long.

Love the flower gardens in SMA, and yours was a refuge for you...noise of new construction has been with us here in Oxnard, California, also since before Thanksgiving...more houses...ugg = more traffic, more cars, harder to get around.

Wow, Glad neither you nor your neighbors had an emergency while the construction was going on! It looked rather formidable! Latest from here: you should be getting a delivery of Reese’s in May-June. Here’s hoping you have a VERY Merry Christmas, and a Happy and Healthy New Year! All the Best!

Steve, I'll believe it when I see the "whites of your eyes", ha.
it has been WAY TOO LONG. Almost 5 years!

Thanks Mr. Bill - Hope you have a lovely Christmas in Tennessee.

Yes, Unknown, need to work on that issue a bit more.

Joan - At least our construction is for the purpose of a new sewage system and not more houses! Thanks for taking time to post.......

Ha Anonymous - I KNOW you are "Dan" I did get out for Thanksgiving Day by hanging on to my son's arm for dear life! But, had there been an emergency it would have been a disaster. Looking forward to seeing you and Wishing you and yours Feliz Navidad!!!!!

Looks like your neighborhood had a period there where it was all ready for trench warfare!

I'm glad to see you are well.

Kim G
Roma Sur, CDMX
Where I'm getting more settled in than ever.

Great to see a comment from you Kim!
I didn't know if you were still in the Northeast or where.
Is your Mom still in Ajijic?

Stay in touch.
Glad to know you're happy in CDMX

Ratana said...
This comment has been removed by a blog administrator.
7:58 PM