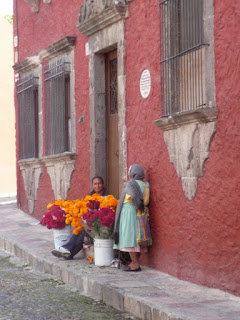 I humbly write this post today.  It is one of more then 1700 posts that have been written in the last thirteen years.  No way would it ever have occurred to me that what started out as a way to let my
family know about my life in Mexico, would turn into something that expanded my life in a very
exciting and enriching way.

Many of you know that my dear friend Billie Mercer, a fellow blogger for many years, encouraged me to start this actually back in 2006.  I wrote one post on 9/11/06 but was intimidated by what I thought was a lack of technical knowledge on how to post photos etc.  But Billie said to keep it up and how wonderful that she did.

From that encouragement, not only have there been over 1700 posts, but there have now been one million readers!  I realize that to many important bloggers that is not that much but to me it is astounding.

It started out slow with me expecting maybe twenty family members to read.  To this day I don't know if they do or not.  But, what happened, was people from all over the world started reading.  I presume it initially was because they were interested in San Miguel de Allende, although that is not in the name of the blog, so who knows?  I only guess.

Recently when I realized the above stats, a bit of research took place about how did the numbers increase?  When were they at their highest?  And what kind of posts garnered the most readers.

Initially the monthly readings were double digits of people daily.  But, within a couple of years the daily readings were over 500 a day.  For instance when I wrote about Day of the Dead in Patzcuaro, that one post garnered over 1000 readers. 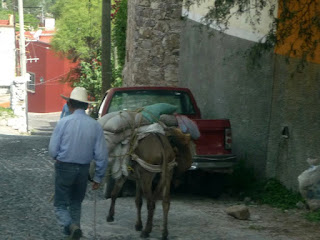 By 2013, when I did a series on Cost of Living in San Miguel and other issues for living in Mexico, it was not unusual to have 5000 reads per post.  For the next few years the numbers were staggering.  It was about 50,000 a month for many months.  Again, I realize to some that is not that high, but to me, it was unbelievable.

More then the numbers though, was the ability to meet many of these people who traveled to San Miguel to either just visit or came to look at a possible move.  Many took the time to contact me to meet and nothing was more fun then to meet them and over the years, to really develop a friendship.

Several rented the guest house or my house when I was traveling a lot, and what fun that was.  To get to know so many of them and their families!  It has enriched my life significantly. 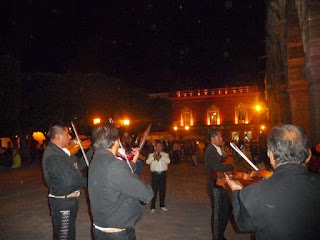 Another unexpected gift of this blog was my being more aware of events, places, travels and taking photographs to share with all of you.  That awareness has led to a treasure trove of photos which are
fun to see again and reminisce with myself about the event. 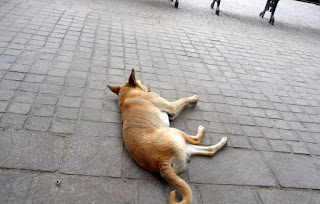 This photo continues to make me giggle every time I see it!  It is a dog who used to come to the jardin and would plop down between the two rows of benches in the major walkway.  No one ever shooed the dog away or fussed at him.  They walked around him or stopped to rub his ears or touch his paws.  And, the dog let them.  Many a day I sat on the bench and marveled at this sight.

I don't get to the jardin anymore but that memory of that old dog lying there is a treat in my mind's eye.

No, I haven't been as good at writing daily as I used to do.  I'm like that old dog, I have slowed down
and am enjoying the fact that I have no more "shoulds".  It is a wonderful way to live in this golden season of life.

My camera fell on the concrete on December 19th and I haven't taken a photo since then.  But, another dear friend has given me another camera that if I master it, ha, I will be able to take more
photos and it has an amazing zoom on it.  We'll see.  The manual is 166 pages.  Needless to say,
I'm intimidated, to put it mildly.  I'm determined though and will begin, one page at a time.  Surely
I will learn!  Right?

See you on down the road with a camera in my hand.  Thanks to all of you who have been with me since the beginning and to all of you who are still here from whenever you started reading.  There are no words to tell you how appreciative I am for your being here...........

I too started my blog so that friends and family could keep up with my travels. I have been at it since October of 2013. I have posted over 1800 entries and have had over a quarter of a million page views (and, thank you, your blog is one of my top traffic sources).

Keep up the good work, Barbara. Your blog is always a pleasure to read.

As for your complicated new camera... does it have an automatic setting so that you can simply point and shoot? My camera has loads of settings that I have never even used.

I have not been with you since the beginning but I have been a very regular reader and fan since I discovered your blog about four years ago. Thanks!

Hi Barbara,
I have been one of these faraway readers. Sad not to have met you yet. Still hoping. Keep safe and happy and yourself. Love from France. Christine

Happy to be one of the lucky ones to have lived in your beautiful house on the hill, and to have met you and your dear friends. Very fond memories indeed!

Barbara, you never cease to amaze me!!! This is totally heartwarming and amazing. Master that camera! Or just use your phone like those of us who don’t know any better. Much love to you and keep this up. ������

Dear Bill, Glen Christine, Peter and Sherra. Ya'll are the reason that this blog has gone on and on and on........It touches me to hear from each and every one of you.

Bill, I do get many readers from your blog. Glenn, somehow you are no longer on my Blogread. Could you send me your URL again? I had a glitsch a few months ago and lost people on the blog and on Facebook. Your blog is a welcome service of great info in SMA. Christine, Get thee to Mexico! Please. And Peter, you and Shelagh were two of the people who I absolutely enjoyed meeting and knowing and having in MY house, which I only rented out three times, all times successfully. Come back to SMA soon.
Sherra, my oh my, my long time friend. We met in the mid 80's and knowing you changed my life in so many ways. Thanks always for your support and love and encouragement. YOU are one in a million. Hugs heading to Houston!

I really enjoy reading your blog. I can't remember how or when I found your blog. Looking forward to reading many more posts from you. survivor972002@midco.net

Please pick up the camera and carry on! I enjoy your posta and have been following you for awhile!

Buenos dias Mary Ann and Sylvia! Thanks so much for commenting
and enjoying the blog. I so appreciate having ya'll around!
I will continue to "carry on". Stay tuned.

Congratulations on your staying power. Every time I think about pulling the plug on Mexpatriate, I think of you.

Steve, likewise! BTW, yesterday you mentioned Winslow Homer
in your blog post. I have been trying to think of his name
since Thanksgiving. I have a relative that has/had a huge
original marine scene in his house. He has passed but I want
to find out from his daughter if she still has it...it was
magnificent!

I, as one of your many visitors am so appreciative to have had the honor and pleasure of your blog and glimpses into your life and experiences living in Mexico. Interest of life in Mexico was my first main reason for coming along and my pleasure has grown and grown more for your blog as time has passed and still wishing I too could experience living this beautiful pleasing country with its so very pleasant and happy people. Sadly though, I have become as the tired and resting dog of the plaza.Yes, your blog has been an ongoing "Up" moments in my daily existence, Babs. My thanks to you.

Oh dear, that Google verify is getting to be Too Much. Anonymous I think is so much simpler

Hi Caddie! What a beautiful tribute to the blog and to Mexico.
I'm so thrilled that you have enjoyed your time reading the posts.

DO try to come visit some time. San Miguel is a place of respite
and visual beauty that calms the soul and warms the heart.

I'm curious about the photo that accompanies your post. Tell
me more. My email address is babsofsanmiguel@yahoo.com

Sorry for whatever Google did this morning.

Hey Babs, over the years I've read & loved your blog. I don't get around to reading it as much these days, however, when I plug in on my husband's computer, I manage to go to favorites to find Bab's Blog. You mentioned your friend, Billie Mercer, I followed her blog through her husband's death and grieved with her, then over to her new blog, then she disappeared. I've always wondered if she is well? Love you and keep on blogging. That 'lil granddaughter has grown into a beauty. Regards, Ginger Nash

Hi Ginger - Billie is alive and well. Pursuing her love of photography and published a magnificent book on Port Aransas, Texas. In fact, I just had contact with her a
few days ago. She is ensconced in the USA riding out covid 19.........

Yes, my granddaughter is growing up to fast and is as beautiful on the outside
as she is on the inside with sweetness.