Lest you think my life is boring, let me tell you about the saga that has been going for several weeks, several times a day. 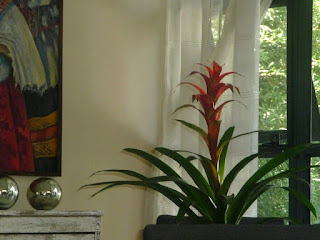 At first I thought it was interesting and funny - no more.  It is quite annoying, actually.

A bird who whistles like a wolf whistle in the big tree in front throws itself against the window that is in the photo above.  It might be my fault........to some extent.  When I heard its whistle, I whistled back for a couple of days.  Again, I thought it was funny.  Now I think the bird thinks its mate is on the other side of the window!  Who knows?  I do not whistle back anymore.

Initially when it started, and I mean it is not once or twice, it goes on for about fifteen minutes two or three times a day, I thought it might be that the silver balls on the chest inside the window were the attraction.  So I closed the curtains for a week.  Nope, that did not stop it!

Matilda and I sat and watched it one day as it threw its chest against the window over and over and over.  Matilda used the term annoying........

Even more interesting is the fact that the bird comes at the exact same time every day.  The first time is 8:15AM.  Eventually I leave the bedroom with my cane to tap on the window so it will fly off.  Now it spots me as I come out the door and takes off for the big tree.  Then it comes back at 4:15PM!
I'm not making this up.  It is the SAME time every day.  Then there is another shorter attempt about 7PM.  If I go and open the screen door, which I do out of the need for self-preservation, it takes off for the big tree and whistles for a while.

I have tried, in vain, to photograph the bird but have not succeeded.  It is brownish with a brownish orange chest.  Anyone know what it is, besides an angry bird?

Life is always an adventure, even when you are minding your own business, in your own home!  Ha.

I had a similar occurrence several years ago. All day long a robin would constantly fly into my bedroom window. I had never encouraged the bird by whistling at it, so I don't know what its motivation was. I think the bird was just crazy, and it's a wonder that it didn't kill itself. It went beyond annoying, and it continued all summer long.

I'm surprised how many people have written to tell me similar stories, Bill. Good grief I hope this doesn't go on much longer. This morning it started at 7:15 and went on for 15 minutes! Yes, it is beyond annoying at this point, ha. And, it is startling too.....

It sounds as if you have a flycatcher who thinks he is defending his territory against a rival. If that theory is correct, he is interested in the reflection on the outside of the window. What he sees is a rival that must be vanquished. During mating season, the glass doors in my patio are a ritual battle field. Short of covering your window from the outside, there is probably nothing you can do. I know that air rifles are not part of your routine.

Steve, I'm not into air rifles or any kinds of guns, but for a brief moment a sling shot did cross my mind! However, the instant this bird sees me, it takes off for the limbs of the big flamboyant tree and sits there and "wolf whistles", ha. Seriously, it does. Too funny. Yes, I'm trying to continue to see the humor in this.......

We have a woodpecker that rat-tat-tats on the metal rain gutters. It's funny, particularly after you realize what's causing the noise.

Ahh, woodpeckers! Is he red headed? I had one that pecked at the huge palm hee in the garden. But when the dead fronds were cut off, it has not come back. I still hear it a block away at someone elses house!

It is amazing how loud their rat-a-tat-tats are!

Are you still traveling? Or back home?

A Buddhist friend might think it’s a reincarnated DonJuan, looking for a conquest! LOL!

Ha ha ha Dan! That would explain why it is so "angry".....Thanks for
a good laugh. CU soon.

Cute Story!! Thanks for sharing

Thanks WH! I need to write another post as the darn "angry bird" has returned, exactly six months to the day he left! But, he is not as angry as before and has
only pecked on the window a few times, which I ignored. He has a whistle that
sounds like a wolf whistle to which I have NOT responded as I did the first go around, ha.