The idea of going to the Hacienda began because a well known photographer in San Miguel has been taking groups of photographers over to photograph inside and around the hacienda.  San Miguel is a small town and news travels fast.

My friends are not particularly interested in photography.  However, they are interested in history and architecture so when the subject came up and I said I had been there eight or ten years ago and photographed it then, they wanted to do another road trip.

Hence the previous post about being on the road.

The Hacienda is exceptional.  It was, in the 1700's, the largest hacienda in Mexico.  Not only was it the largest, but the most productive, with cattle, agricultural crops, mining nitrate for gunpowder and harvesting crops for mescal, which is still ongoing to this day.  The mescal that is........

Construction on the buildings began in 1613 when the second owner of the land, Martin Ruiz de Zavala lived there.  Interestingly, there are many Zavalas living in San Miguel. 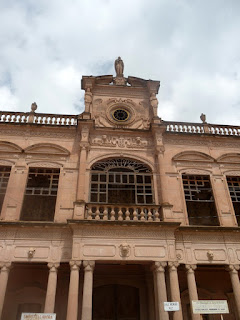 In 1694, Andres de Berrio married the daughter of the third owner Damaso Said Saldivar.  This man was involved in the National Bank of Mexico, was very wealthy and provided money for expeditions into Northern New Spain, as the country was called at that time.  This was the beginning of the Berrio's family ownership of the hacienda. 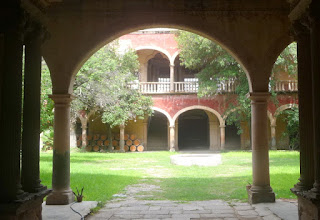 As I mentioned, this haciendas lands extended from the State of Durango to the State of Mexico.  It was so successful and profitable that the owners were given the title of Marquis! 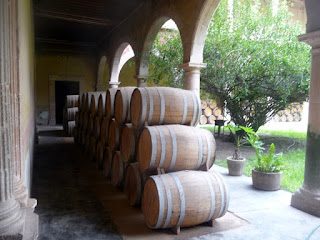 Barrels cover the portico areas today with mescal that is being aged for the future bottling with the name of Jaral de Berrios.  I bought a bottle as did the others in our group. 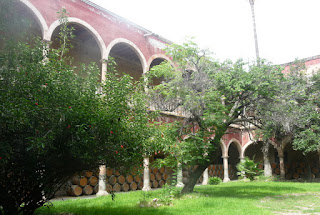 Let me back up a minute and tell you about the mini adventure to get in here.  We arrived to the village of mud and water and rutted streets.  I got out and yelled through the chained front doors looking for the guard.

No guard.  I told everyone to be patient that someone would show up.  Within 5 minutes a red pickup pulled in and parked in front of the doors.  Out came the watchman and his son.  I asked if it would be possible for us to go inside to see the hacienda.  That we had come a long distance.  At first he said "No".  I then said g 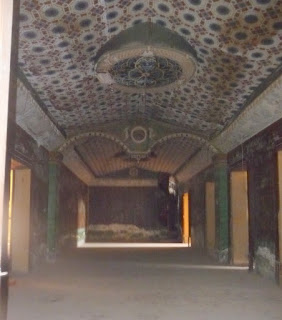 we would not be long and would it be possible?  He said he had to call his jefe (boss) and it would be a few minutes.  And he did.  The owner of the property is in Mexico City and he agreed that we could go in for a short period of time.  While the others looked around on the second floor, I stayed and schmoozed the guy with my pathetic Spanish.  I asked about his family and how long he had worked here.  Things like that. 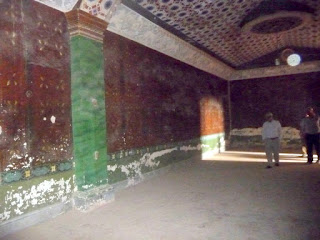 At some point he walked over, unchained and opened the doors to the parlor that still has the stenciling and painted walls from so long ago.  It was so totally dark in there at first I could not see anything.  Then my eyes adjusted and I could take the two photographs with my handy dandy flash.  They aren't great but they do show what magnificence there was until  the late 1800's.  I was elated that those with me could see these rooms as the rest of the property is in such decay. 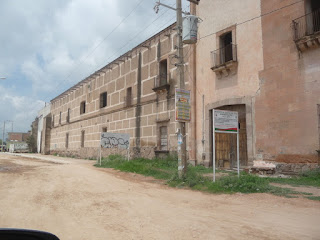 The photo above is another wing of the property that I was in previously but which we did not enter the other day.  The population of the village lives on down this dirt road. 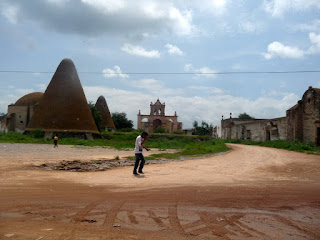 Here are granaries and storage areas that are located across from the hacienda.  In the distance is a magnificent chapel that was built by one of the owners as a burial chapel for himself and his family. 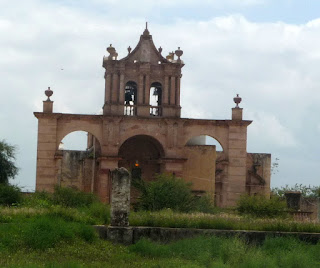 It was typical back in the days of the haciendas for the chapel to be connected to the hacienda so that the family could attend services privately.  This chapel is quite large and elaborate.  It had a fence around it with chain link on the gates so that it was not possible to walk any closer to see it. 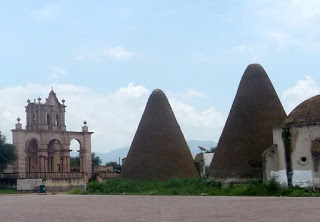 Here is the chapel adjacent to the granaries so that you can see the scale of it.

In addition, there is a lovely church to the east of the chapel.  I'll share those photos in my next post along with photos taken many years ago when I was last at the hacienda.  Again, it was common for the hacienda owner to build the church for the workers to use and the people in the village.

This hacienda is truly in the middle of no major towns or cities.  There is a train station nearby that was used back in the day, but is not used any more to get from Mexico City to Nuevo Laredo.

There is a LOT of information and photographs on Google.com and the article that gave the most information was the magazine article from Mexico Desconocido. It is in Spanish, but can be translated into English by hitting the translate button.   I found out about the chapel both from this article and a photographer who referred to it as la Capilla Hacienda.

In the information, it also came to my attention that Dotty Vidargas Realty in San Miguel has the listing to sell the hacienda.  It could be a great destination resort!

I hope I can go there this next month. You never know what's behind "that" wall. Great post and wonderful pictures.

Thanks! I'm going to post more interior shots tomorrow. Possibly I'll post photos also of other haciendas in this area that I have visited. I LOVE the architecture!

Very interesting post.
Since the property is for sale, yes, someday it may end up as a resort hotel. In the Yucatan many of the old henequen haciendas have been converted into luxury hotels or restaurants.

Yes, Bill, it would probably need an airstrip or some means of transportation from the nearest airport, which would be San Luis Potosi, but it could be wonderful, with enough money!

It's disturbing to me that the State of Guanajuato does not promote these as an architectural heritage. I realize why the haciendas are no longer operating, in most cases, but still they are a thing of beauty to be seen, IMHO.

Wonderful post Barbara! I have never heard of this hacienda and now I have one more place to visit!! I also look forward to reading all about it, thanks for the links.

Oh I would swoon to see the chapel! This is food for dreams - think of the life they led! Oh how I'd love to see it and know what it was like, for a woman especially, to live there. I simply can't imagine! You have a wonderful way of writing the most provocative posts! Another "must see" and another place to research. By the way I love that you talked to the caretaker and the questions you asked of him. I'm sure he was charmed. :)

You just have to look at what was built in Boston and environs in that era and then compare it to what the Spanish were building in Mexico. The Spanish in Mexico were living *LARGE* compared to the English in New England. But of course things change, as did these.

Still, a very fascinating time in Mexico's history. Thanks for sharing.

Kim G
Boston, MA
Where the housing has improved substantially since the 17th century. Like our ceilings are higher than 6'5".

Shannon, Barbara and Kim - Thanks so much for your comments! Indeed it is a fascinating time in history.

The haciendas were the equivalent of the plantations in the South. Built on the backs of the indigenous, sadly.

Unfortunately, 99% of the haciendas are NOT open to the public. I was able to whangle us in with patience to this abandoned hacienda. And, of course, others are occupied and you can't just walk up to someone's residence and knock on the door.
Arrangements must be made in advance. Even if it is possible.

However, there is a hacienda in Marfil near Guanajuato that is open to the public. It was restored and lived in by Porfirio Diaz. Hacienda Trancas near Delores is open to see as it is a B&B.....and there are others that have been restored. It's an adventure to research and discover these magnificent structures..........