On The Road in Mexico - Hacienda Jaral de Berrios

We were on the road by 9AM this past Wednesday morning.  The van had two more passengers then the day we went to Vizarron and Tequisquiapan.  Two new people who I had never met before.  We were a full
van.

I'd told the three that I traveled with before that everyone should bring a lunch as where we were going there was no place to eat. Also that it would be prudent to make sure that the car had gas as I didn't remember seeing Pemex stations on my last trip to Hacienda Jaral de Berrios about eight years ago.

Well, we did find a Pemex station near San Felipe.  We also found the usual attached OXXO store so those who had not believed me could stock up on something to eat.

By this point we were about an hour past Delores Hidalgo heading northeast toward San Luis Potosi.

For me, just getting out and riding the back roads of Mexico is enough.  It's always beautiful in one way or another.  Usually this time of the year, we have only had a few weeks of rain so things are not green yet. 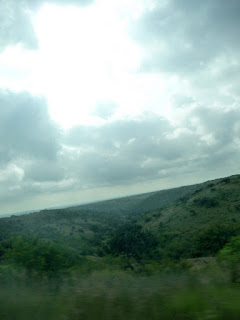 Not this year!  We've had rain all year long and especially the last five weeks.  Whoa, it has been something else.  The skies have looked menacing so that one is usually looking up if they intend to be out in the weather as to how to dress.  I never leave the house without an umbrella at this time of the year.  In addition, I always make sure all windows and doors are closed.  The storms seem to come up in a matter of minutes, sometimes. 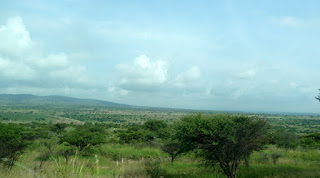 We were all exclaiming about how green the fields were and how magnificent all the crops looked this early in the season. 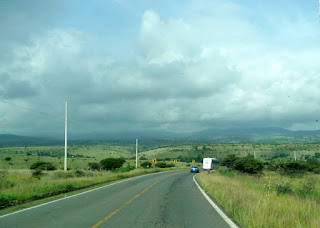 These photos were taken between San Felipe and our arrival at Hacienda Jaral de Berrios. 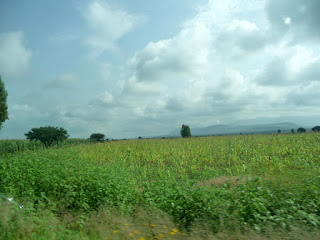 We arrived at the hacienda after about a two hour drive.  The dirt roads in the village were a sea of mud with giant ruts. 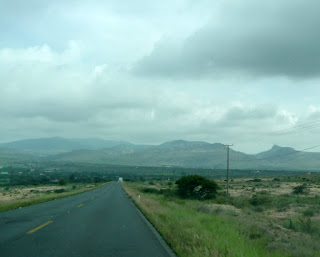 And, as the day progressed, the clouds came down closer to the mountains and got darker.  Surprisingly, we arrived back in San Miguel around 5PM having not experienced a drop of rain!  And.............drum roll please, no rain since Tuesday!

Stay tuned, the next post will be photos of Hacienda Jaral de Berrios, built at the end of the 1600's.  It was, at its time, the largest hacienda in Mexico with its lands extending from the State of Durango to Mexico City.
It's an amazing place and a very interesting story.
Posted by Babs at 10:52 AM

I was expecting to see a grand old Hacienda building ;)

For me, just getting out and riding the back roads of Mexico is enough.

No truer words have been spoken.

Thanks Norm. I don't think I've ever had a road trip that I didn't see something I've never seen before or something I hoped to see. The other day I saw several wagons in little villages being pulled by horses with crops and hay in them. It's those kind of things that make my spirit soar!

Lovely countryside! I look forward to the photos of the hacienda, although it sounds like it's a bit far afield to add to my list of weekend excursions to take when I am in Mexico City.

I love the clouds up your way. They are an endless source of photographs.

Bill, you could plan a trip to either the City of Guanajuato or the City of San Luis Potosi and see many haciendas in those areas, using the cities as your base. SLP is about a 4 or 5 hour drive from DF. It is a fascinating city and very wealthy in natural resources. There are about 4 haciendas in close proximity to the city and then to the east is the Sierra Gorda!
The City of Guanajuato has amazing architecture to see along with a hacienda in Marfil, a suburb, then heading toward Delores Hidalgo there are a few more! Put Haciendas of the State of Guanajuato in your google search engine. You'll be amazed!

Steve, me too - but I also enjoy the clouds at sunset in your neck of the woods. I remember sitting and photographing the clouds changing colors one evening for about 45 minutes. At one point I counted 11 different colors in one cloud...........it was spectacular.