The Saga of Scout the Dog and Velcro the Cat

On Friday night, as I attempted to watch TV,  Scout and Velcro turned out to be more entertaining.

Scout was just shaking to play with Velcro (my perception) and Velcro was enjoying walking as close as
possible to Scout to spread out on the chaise as though daring him to touch her.

I managed to get up and get the camera while this charade was ongoing.  Both were so intent on what the
other was doing, or not doing, that they did not pay any attention to what I was doing. 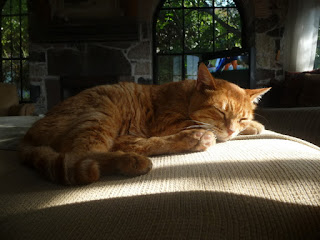 Velcro jumped up there in the prime place to lay on the chaise and to lounge in the sunshine.......... 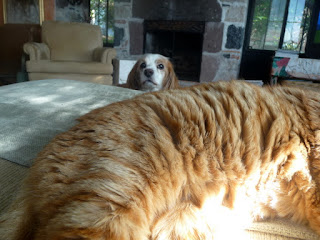 Once Velcro was settled, Scout began his slow move to get as close to the back of Velcro without her puffing up like a fur ball and hissing as possible. 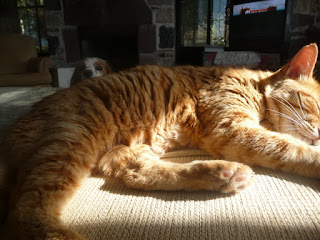 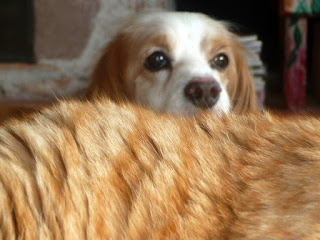 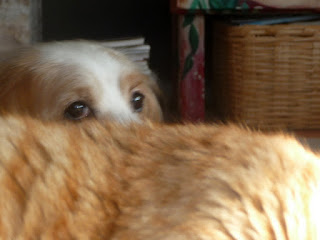 Then he decided to adopt the "I don't care and I'm not looking at you" attitude. 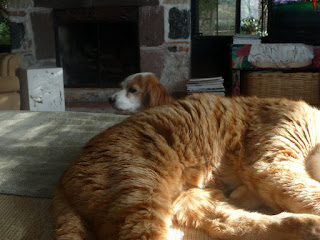 Velcro appeared not to know he was there.  However, I KNOW she did! 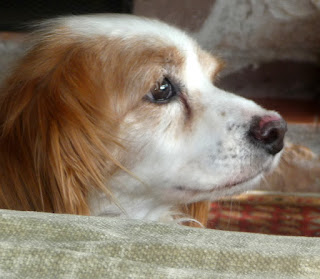 Scout could be the best bird dog on the planet because he held this pose for over five minutes.
I was quietly chuckling to myself.  Isn't he a beautiful dog? 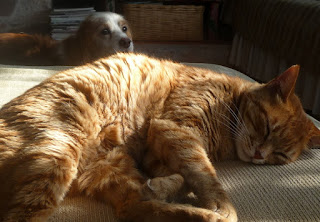 Then he finally stood up and looked directly at Velcro.  I know she knew he was there as her
ears were moving each time he moved.  The saga was over.

Scout went home to his real home on Saturday.  Velcro, who had become used to in the past week walking on the furniture or counters rather then on the floor was ever vigilant.  I saw her checking out every place all day Saturday and even yestrday.  Nope, the interloper was gone............No one waiting for her to come in or go out the door.  No one waiting to get her milk, or vice versa.

Life has settled back to a dull meow.  I, on the other hand, have been removing white dog fur from the carpets for two days.  It was all worth it..............I so enjoyed taking the time to watch how the two of them managed to live in peace, sorta, and harmony.
Posted by Babs at 3:26 PM

Cleaning pet hair, for me is worth every moment, for the joy they bring our household!
I wouldn't give it up for anything.

Cats are sneakier than dogs, something which dogs generally don't recognize.

Kim G
Boston, MA
Where we are in the thick of shedding season.

Both of them are great, but cats will always have the upper hand.

I love the picture of Velcro sleeping and Scout peering over the edge of the bed. Somehow I suspect the entire thing was orchestrated by Velcro though, LOL.

Tancho, I've always had short haired dogs. Many of them that I loved dearly, but I think if I were choosing a dog, it would not be a long haired one although Scout is wonderful. And, animals sure do bring entertainment and joy...I agree.

Kim and Peter - It was so much fun to see how Velcro kept the "upper hand" and how badly Scout wanted to mix it up.........ha

Steve, YOU need a dog! I have a cat..........plenty of great rescue dogs over here in San Miguel. Every time there is a golden lab up for adoption, I think of you.....

No plan in my life to ever have another dog.

Shannon, I think you're so correct! Velcro was "in charge" the whole time........funny to observe.