Having not watched or been to a Super Bowl party in at least ten years, great enthusiasm was not oozing from me on Sunday.  It's a long story, one I won't bother to share.  I did indeed attend a party however
at the Real de Minas Hotel.........and it was FUN!

Expecting only to see a couple of people there, it turned out to be way more then that.   The people I was meeting were both from the Seattle area.  I had no favorite in the game.  My days of loving football were when I knew the old college players who were then in the NFL.  Those were heady days - about 30 years ago.

When the Oilers left Houston, I kinda gave up.  So imagine my surprise at the fun I had on Sunday - watching everyone else.........and the game.

First of all, the manager of the hotel greeted me with the comment, "You must be John's mother!" which just surprised me.  I, nor my son think we look alike, but when this happens sometimes, then I realize that we
must.  My son, truly, knows way more people in this town now then I do!

Our reserved table could not have been better.  It truly was right in front of the huge screen.  The party was in the big ballroom.  Originally my opinion was that it would not fill up, but they had clothed tables set at strategic points to take advantage of the multiple screens.  The room filled up comfortably.

In addition to the tables, they had printed menus with the food and drink items.  Lots of waiters.  It was a nice operation. 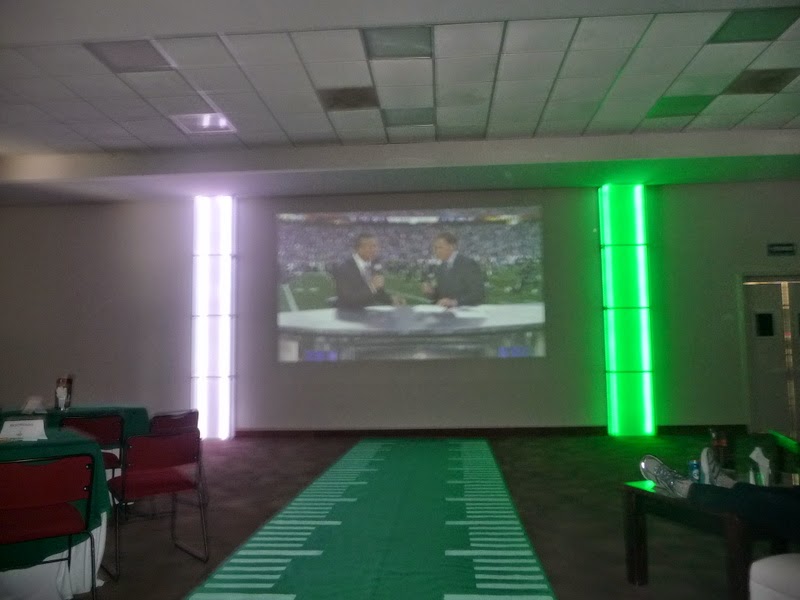 This photo was taken by me sitting at our table! Perfect view!  I though we should have had pom poms to do a little cheer leading from time to time, but no one shared my enthusiasm for that endeavor.   With the green carpet set up as the field , it seemed appropriate to me.  (I'm just kidding) 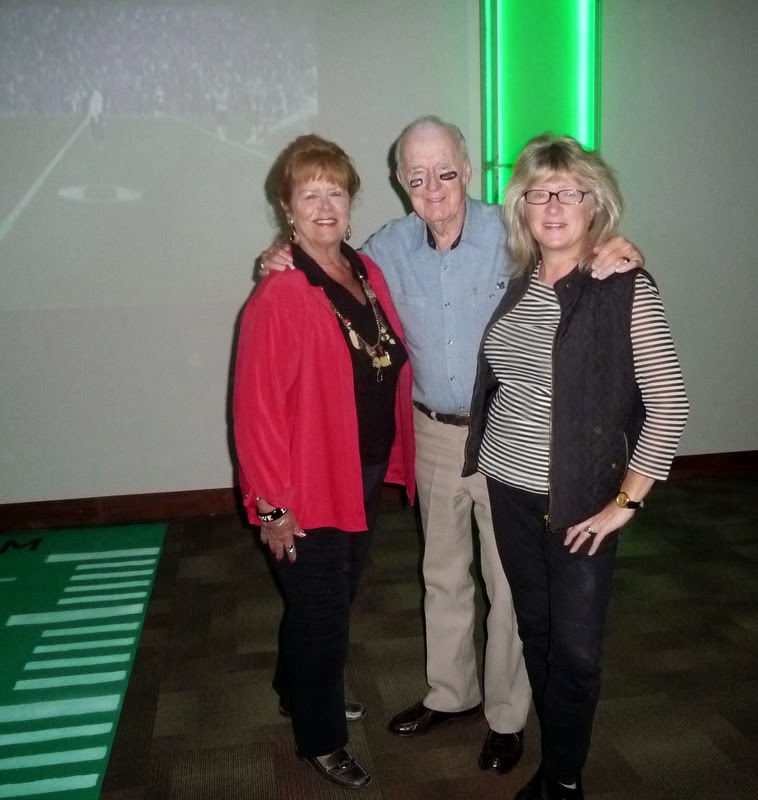 Here's a photo taken by a women from Los Angeles in the audience of myself, my friend Camie and her dad, Jerry - both die hard Seattle fans.  Jerry has stickers under his eyes of the Seahawks! 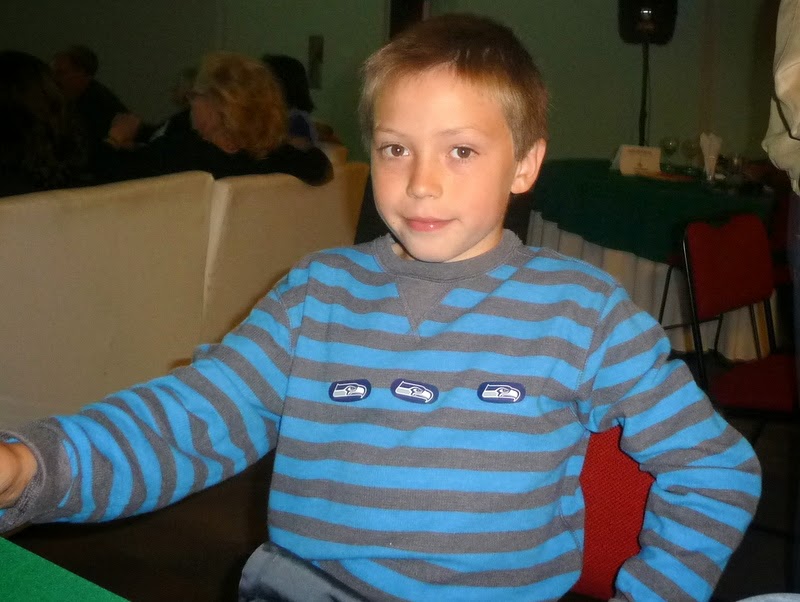 But, I have to confess, the BEST part of the night was when I met my new friend Phillip.  We hit it off right away!  At nine years old, he just astounded me with his maturity, manners and enthusiasm for the game.  Quite a conversationalist as well.  Having met his dad and conversed with him,  the apple doesn't fall far from the tree, as they say.  What a neat kid and dad.  Great fun watching Phillip when touchdowns were made as he jumped out of his chair yelling.  But even more endearing was his facial expressions when things weren't going too good.   Luckily I left before the end of the game so I didn't have to see the suffering looks of all. 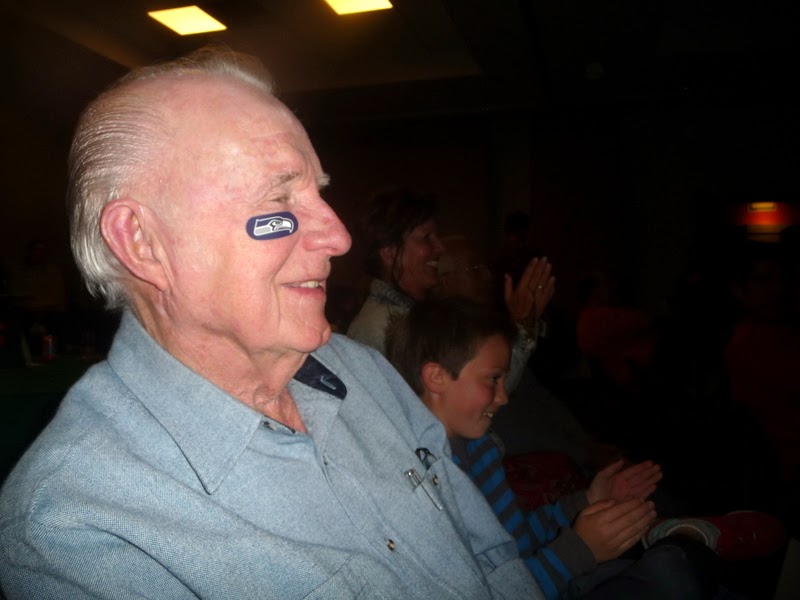 Camie's dad, Jerry and Phillip had fun watching the game together.  Obviously, this photo was taken at a good moment.

It was an exciting and intriguing game, to put it mildly.  In fact, after this experience, maybe next year I'll either go somewhere or better still, have a bunch of  people to my house.  I have two TVs - no, not big screen but it still would be fun.

I'm pretty "superbowl-oblivious," but since our home team was playing I thought I should try to figure out who won at the end.

Fortunately it was too cold (lower teens °F) and there was too much snow on the ground here for any kind of winning-related chaos, so we survived another major sporting victory.

Reminds me of a World Cup in Mexico City one year. I've never seen the city quieter; it was amazing.

Kim G
Boston, MA
Where the most annoying thing about events like the Superbowl is all the wannabes claiming "we" won. No. The Patriots won; you just watched.

Kim, I have thought of you each time I've seen Boston and the snow.
Then the game......I'm glad to see that you have survived the snow, sorta.

I hear you're having a big celebration tomorrow. Snow be damned. Sorta crazy, I think.

We couldn't get excited about the Superbowl. However we heard that Bryant Gumbel had done a special on the Chicago Bears team that won the Superbowl and what they look like now. QB Jim McMahon is pretty much a vegetable, "The Refrigerator" Perry also has all sorts of physical and mental problems, all of this no doubt resulting from brain and other injuries suffered when they were playing. Wow.