Traveling the Back Roads of Mexico!

Nothing makes my heart sing more then to be on the back roads of Mexico!  To see the horizons, the fertile land with brocolli or maize or whatever that is planted for as far as the eye can see and to see the people.

The last few days I've been on the road for brief periods.  Over to near Delores Hidalgo for some talavera pots to replace some rusted buckets on the roof terrace.  In the distance were rolling thunderclouds.  The mountains were misty so I knew the rain was imminent.  Indeed, before I got back to San Miguel we had a lovely rain shower for a few hours.

Gratefulness flooded me as it tamped down the dirt that has surrounded the house, me and Velcro's paws.
Yes, there have been little dirt prints in the house lately.

Then yesterday, I headed over to Celaya for shopping at Walmart, Home Depot and Costco.  A stocking up trip so I can be ready for Christmas baking in a few weeks among other things.  Necessary things like plant food and concrete nails.  A ham for a gathering.  Stuff like that.

The drive was exquisitely beautiful as always with the planted fields everywhere.  In addition, the yellow daisy wildflowers are still blooming.  So tall as to almost be a boundary marker for the fields.  It is interesting how that drive is so relaxing.  No towns to drive through so its all countryside.

One new addition to the drive is a huge vineyard.  All the stock is planted on rolling hillsides.  Quite lovely.
Many vineyards growing in this area now.  Close to ten.  The soil and atmosphere here is perfect for grapes.
Think Napa, or, don't laugh, Texas Hill country, which has won many awards.

A few weeks ago I was on the back roads around San Miguel.  Get away from centro in the colonias  and there can be all kinds of sights to see. 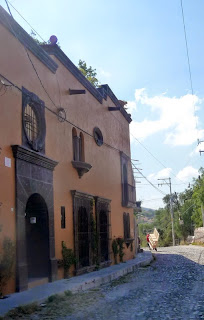 I was passing through Colonia Obraje when I caught sight of something moving in the distance.  At that time I wasn't quite certain what I was seeing. 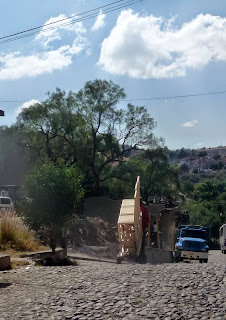 By now I could see that it was someone hauling chairs down the cobbled road toward San Miguel and the centro.  Either to a store or a home, but since unpainted or unstained, probably a store. 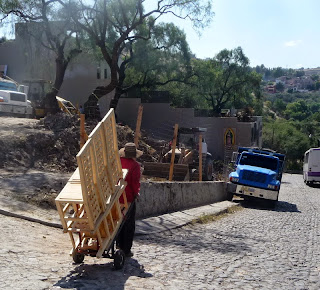 Six chairs being hauled to market!  So many memories flooded my mind.  IF I were still in business, I would have stopped the man and asked where his taller was, what he made and what were the prices.

There were times in the past, especially over in Michoacan, when I have followed a truck until it stopped to find out where the beautiful things were coming from.  Many a day was spent meeting these amazing craftsmen and women along with seeing their creations.

One of the most amazing stories goes way back into the late 70's when I met Bustamante in Tlaquepaque selling his surreal work.  He didn't have the fancy shops that he has now but was sitting on a wall with his work spread out around.  We talked for quite a while.  To be truthful, I had never seen anything like his work and was so intrigued.  He asked if I wanted to go to his taller to see more.  Of course I said, "Yes". We rode in his old beat up pickup truck to his taller.  It was like being on another planet.  Surreal work everywhere.

Of course today, I couldn't afford any of his work.  His well designed boutiques are not only in Mexico but I've seen them in the USA as well.

Then there is the memory of my buying clay pots down in centro in San Miguel.  The owner said he would have his man deliver the six large pots that I purchased to my home.  Of course, I thought he had a truck.
Next thing I see as I look out the window a few hours later is an ancient man coming up the steep cobbled road with the pots on his head!  It was a sight that was hard to believe.

Maybe that is why I'm still so happy to be here.  Just when I think I've seen a lot, something else either surprises me since I"ve never seen it before or something I see brings back sweet memories.

Love this! Can't wait until I am ready to move and I can pick your brain about where to find stuff for my house!

I just had a cancellation from a californian scholar for next week just this morning. She is too afraid to present her book at the UNAM, because of all the stuff going on there. I just wrote her that she is missing out on some of the best in regard to what Mother Nature has to offer right after the rainy season when everything is lush and green. Being here in April just won't be the same.
Your mentioning of Bustamante brings back lots of fond memories of SAM in the 80's when he actually still had a studio there and his work was expensive, but still affordable. I always liked to look at his stuff, but never was tempted to buy anything.....whimsical is not my style.
I also wonder, if he is the source ( long forgotten it seems ) of all those sun & moon collections over so many walls in Mexico...lol.

Droelma - There are cancellations in San Miguel from people because of what is going on in Guerrero! Do they not understand how far that is? It's like someone wouldn't go to NYC when there is a riot in Ferguson, Mo.!

I never cared for Bustamante's work either but he was an intriguing person, to put it mildly.

This particular person was told that there would be " paros " at UNAM next week and that they could lead to violence. That is why she cancelled. Fear is often a feeling that cannot be dealt with by applying logic and therefore I said nothing, except that she would be welcome to spend time with me and sas planned beshown some of the non-tourist sights in spring, since she is a good friend of a friend of mine who lives in Paris. We are a small net of women who mostly know only about each other, but often function as messengers when we travel to supply each other with items that are difficult to get where we live. In my case this time it would have been unusual hand spun featherweight knitting yarn, lots of lambs lettuce seeds, seeds of asian herbs and several surprises. I often carry Mexican oregano, mole, mexican saffron and other items, leave them in Paris from where they are sent to Chartres, where a mexican friend of my friend lives.
I agree with you, often people have no idea where things are going on and that often it does not influence what tourists do. I have had people make a very astonished face when they told me they would never spend time in Guerrero, because of the narcos while spending their vacation in Acapulco or Puerto Escondido when I told them they were in Guerrero !

Very interesting Droelma. Thanks for sharing.