Touched and Honored by Blog Readers

The day started out to be one way, and by the afternoon it has turned into a whole other plan.  Not unusual, to put it mildly.

Yesterday I was making lists in the evening of all the things that needed to be done.  Josefina and Javier were coming.  All kinds of handyman stuff for Javier and a few things for Josefina still to do in the guest house.

Then at 8:15AM this morning the phone rang.  NEVER a good thing for the phone to ring that early.  Yup, Josefina was ill and not coming.  Ok, no big deal.  I can make the bed and do the dishes in the sink that I left last night.

Javier came and we went over his list, which, to be sure he got all eight things done (which he did), he wrote it over in Spanish.  He tickled me so when I asked him to get the standing water out of the sink upstairs.  No, there is not a plug. That would be too easy.  He said, "Ahh yes, casa de mosquitoes"  Made me laugh.

What could be on the list?  Here's some of it.  Touch up the outside wall where the bulldozer threw rocks up against the rust wall and left white holes.  Knock down a hornet's nest.  NO, I don't want to know how to do that or what Javier did to get rid of it.  Pull some weeds.  Cut off a dead limb on the china berry tree. On and on and on.  He loved that he had a written list and didn't have to remember all those things, he told me.

Then I got a call telling me there was NOT going to be the delightful Revolution Day parade today.   I didn't believe it. Every parent and cab driver I asked last week said it was today.   Knowing it has been a three day holiday, I did something I seldom do, I took the taxi to the centro.  A darn good thing.  EVERY parking lot was full.  You can tell when that has happened.  They close their doors.

Went to the Farmacia Ahorra to pick up meds.  Now many stores have a card that you use and ostensibly it is worth something, but I never knew until today what it was for.  The pharmacist rang up my meds and then told me there was enough credit on that card to get them for free!  Woo hoo.  A gift.

That started this part of the day on a good note.  Happily I headed to meet the coffee klatch group who was hanging on the edge of the cafe as the whole town is and was FULL of tourists.

No parade today.  Bummer.......but I didn't let them dampen my enthusiasm for the next event to come.

At 12:30 the plan was to meet a couple from Santa Monica California who have read the blog for many years.  They have communicated with me via comments and emails.  Today we FINALLY met.  How delightful! 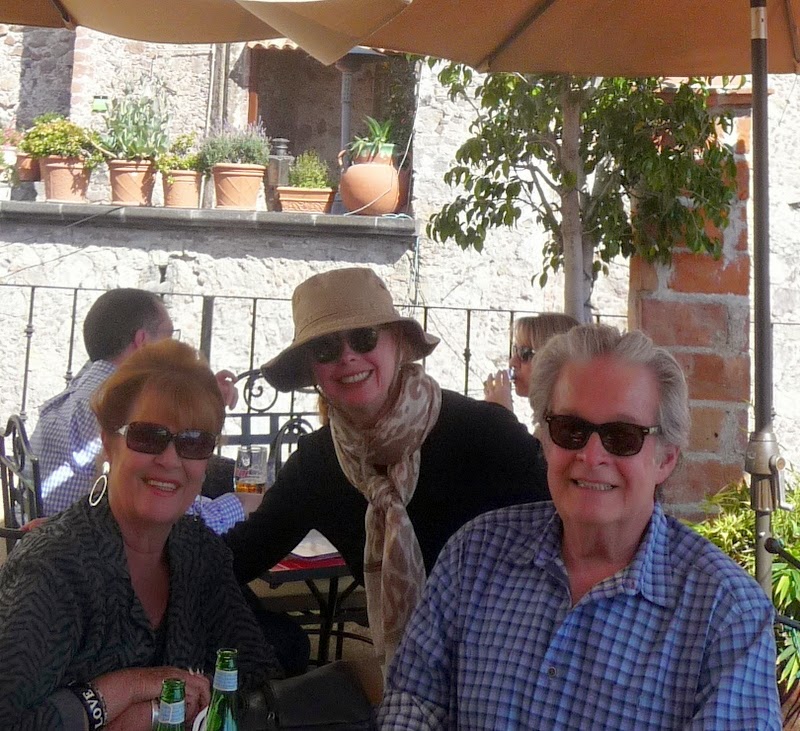 We only got to spend two hours together, unfortunately, but it could have been two days.   I don't think we would have run out of things to talk about.  I so hope that Rick and Lily return again another time.  It appears they will.

It's been an enchanting time the last month.  I've met two other couples as well.  One couple from near Laguna Beach, California along with two others from Cleveland Ohio and Mexico City.  Again, upon meeting it was as though we had known each other forever.  It's a surreal feeling.

I'm so touched and honored when people take the time to want to meet.  It enriches my life to put a face to all the comments.  A really interesting phenomena.

As always, life is good.

What a wonderful treat. It is always nice to actually meet someone you have met via emails. I met some of my dearest Photo friends via the net. And just like you today, when I met them in person it was like we could talk forever.
Billie

Billie, it is cool. It's also slightly surreal though since they know so much about me and I know little about them.....the exciting part is how in the conversations, in person, all the connections that are made.

Yes, Barbara, it is indeed a delight to meet someone face to face after corresponding via e-mail and blog comments! I thoroughly enjoyed our brief time together in San Miguel. Isn't it amazing how we have met people through our blogs?!
By the way, do you know why they canceled the Revolution Day parade?

Yes, there were too many tourists in town and it was Buen Fin for the parents.

Have a Delta airlines person from Cincinatti renting the guest house the first week of December. She said the wind there today is ferocious....

I saw you in the jardin a few weeks back, and it was like seeing a central character from a loved book. And last week I saw your son walking a spaniel off of Orizaba (i think), and the story continued to come alive.
The internet can be a positive thing.

Hope that grandson is recovering.

Happy Thanksgiving wishes from Houston and a long time reader of your blog.

Awww, Dana, how sweet! I wish you had come up to me and introduced yourself..........
Yes, we have a new addition to the family, Scout, the spaniel is now receiving much love from John, Matilda and Sebastian. Seb proudly shows his scar and says it is his "hero scar". I am blessed.