Marching Along in Mexico on Revolution Day - November 20, 2014

To say that this years parade was different would be an understatement.  No little kids dressed as Pancho Villa and his sidekicks.  Little frivolity.  Kindergarteners add frivolity but only very few, like two, were in this parade this year.

Instead it was marching groups - drill teams, drummers, cheerleaders, senior citizens.............and those that were honoring the 43 students that are missing in the State of Guerrero.

Having arrived early at 10AM to be there for the 11AM parade, the sight of those wearing placards to honor the 43 were the first thing I saw. 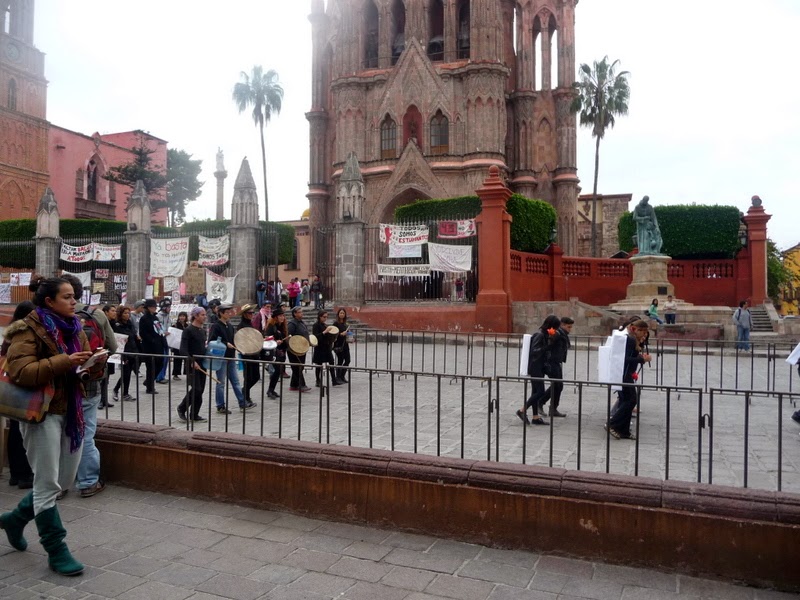 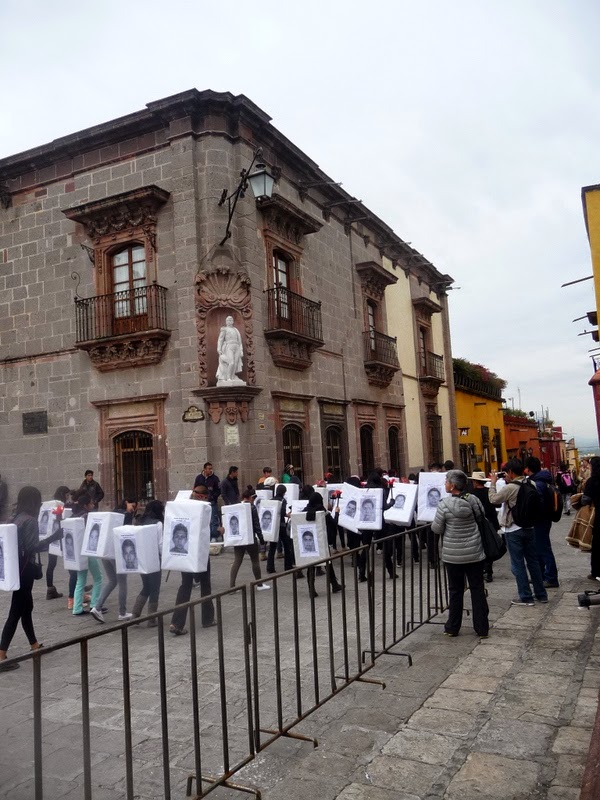 Drumming and chanting.  Bystanders watched quietly and respectfully.  They had just walked in front of the Parroquia where banners have been placed on the fence in front at least a week ago, if not more.  You can see those placards in the first photo in the background.

After the group moved down Umuran, I went to look for a good perch where I could sit and watch the little ones come by. 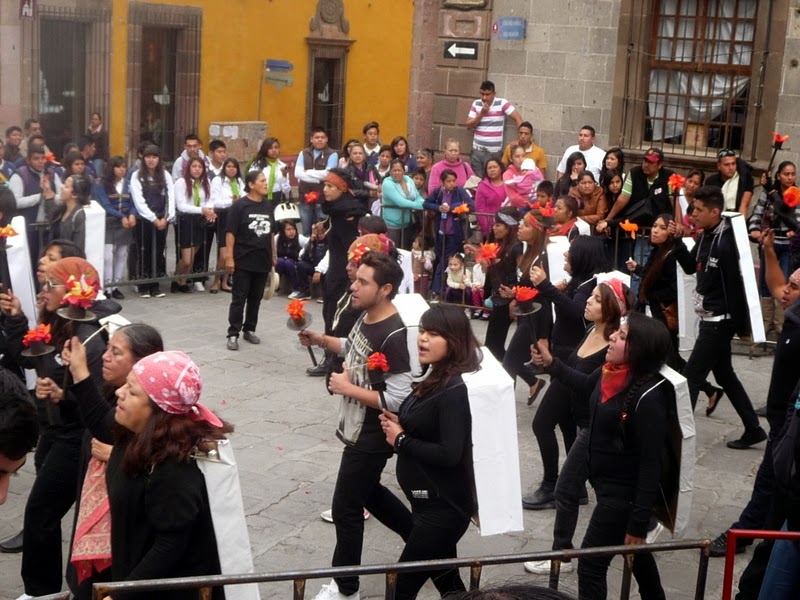 However, the group that I had seen at 10AM were leading the parade again with the drummers and chanting.
Again, the spectators stood in respectful silence. 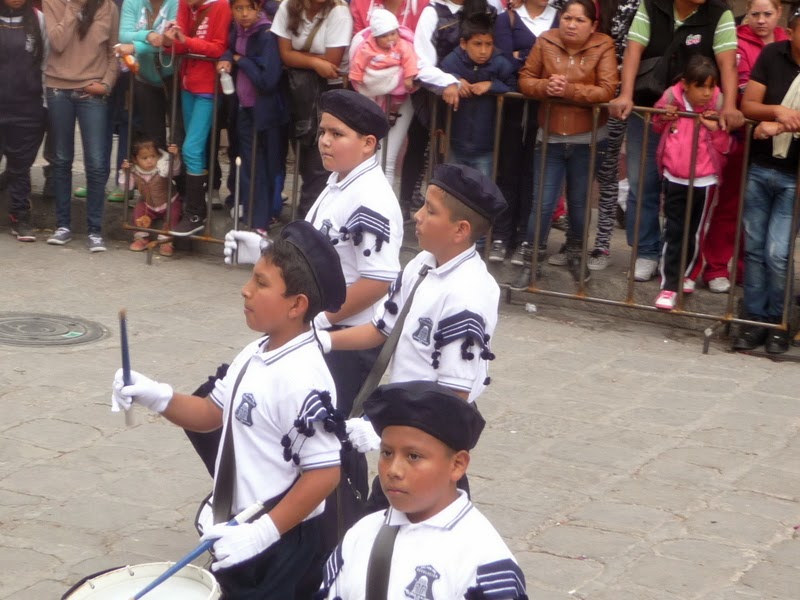 Now I know why on any afternoon when I'm home and outside, I can hear drummers practicing, somewhere.  At least twenty drumming groups were in the parade. Of all ages and sizes.  They do love to
drum and march. 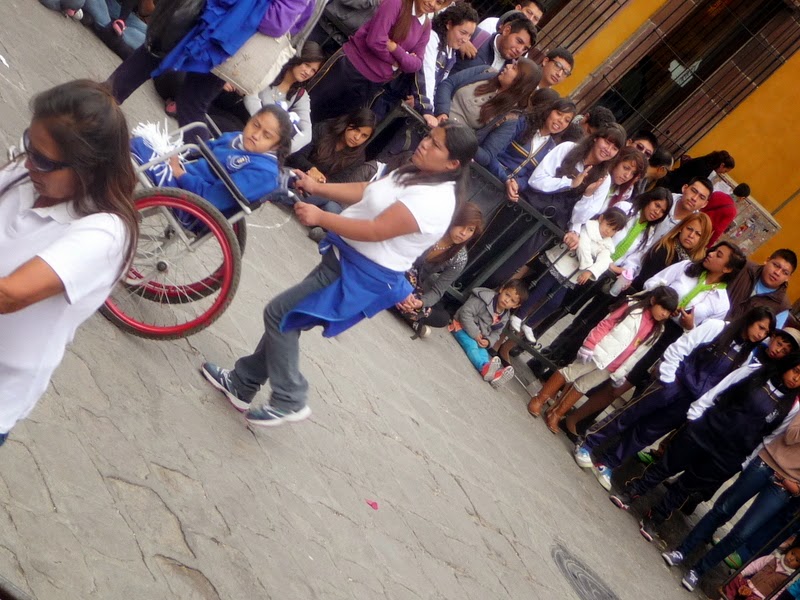 Adding to the poignancy of the parade were the special needs children.  Some walking and some in wheelchairs.  It is so touching that they are not forgotten, but get to participate like all the other kids. 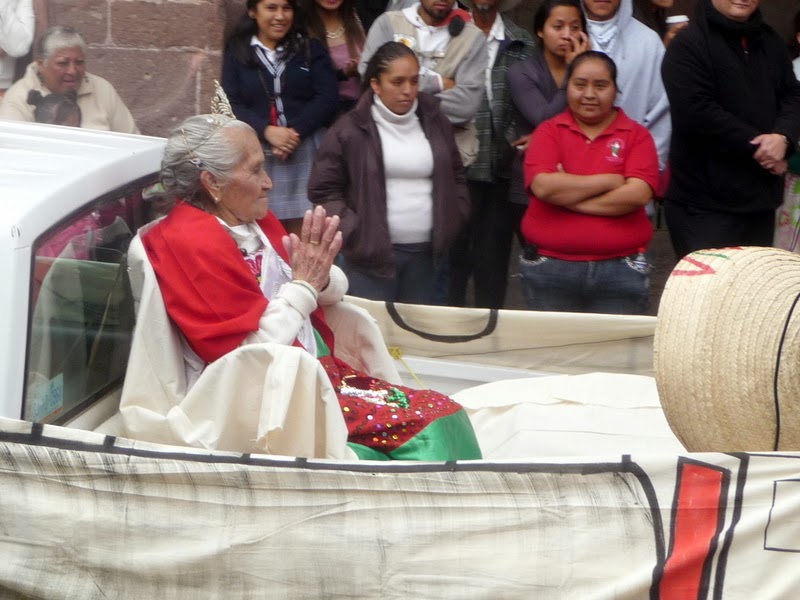 Right behind the special needs kids came this truck with a beautiful elderly woman sporting a tiara.  It was lovely as she was followed by older women who were dancing! 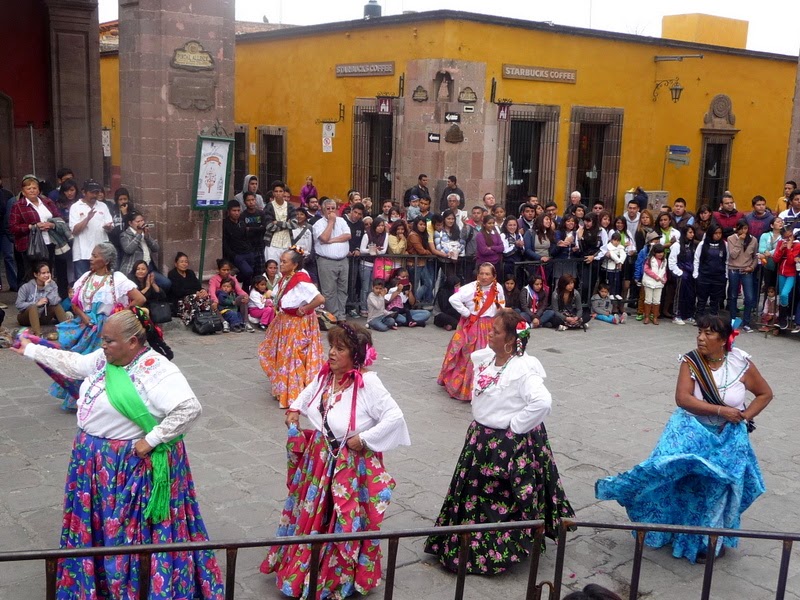 Mexican parades are NEVER predictable.  I've never seen this group before in any parade. 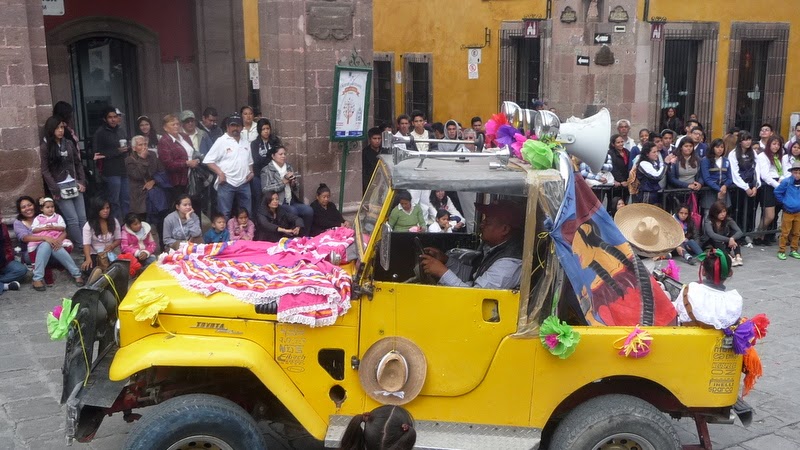 In the USA in parades, it is always fancy convertibles.  This just made me laugh out loud.  It carried a precious cargo. 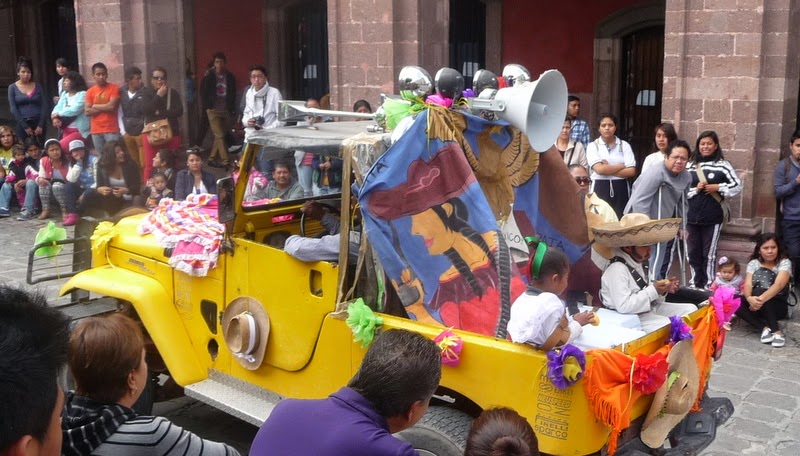 Two little kindergarteners busily eating fresh fruit who could have cared less that they were in the parade! 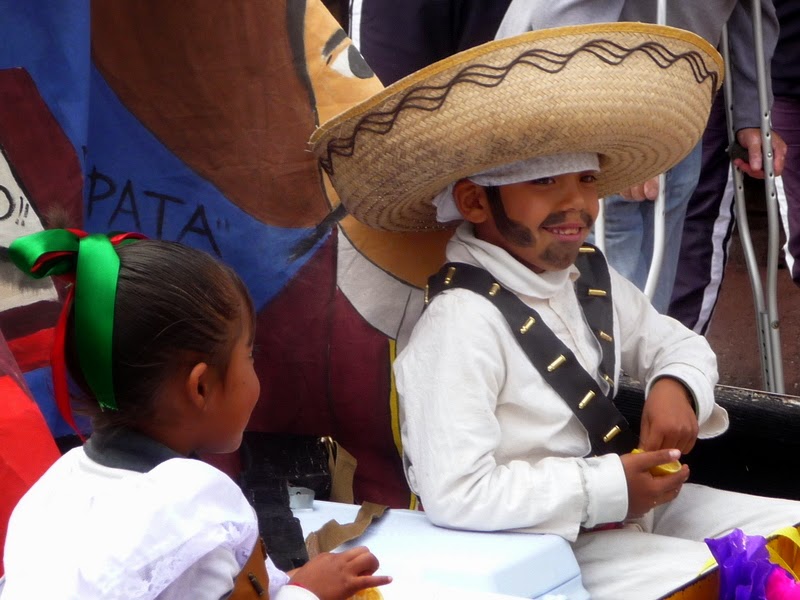 By now it was almost 1PM and I left.  And so it goes.........when I headed home at 3PM, the parade was still going on.  Women with aprons on were dancing in the street.

Marching in Mexico is for everyone!

Wow, very appropriate and creative way to celebrate an important holiday at this time. I salute your little city.

Thanks, it IS a special place.

Nice pictures of the event, Barbara.
The placards on the fence in front of the "parroquia" have been up for some time; they were there when we were there.

Bill, I couldn't remember when they first were put up. I was surprised as I've never seen posters or signs on that fence before....in 14 years, that I can remember.

The 43 have changed everything everywhere in Mexico....

Yes, in Guererro and DF, but not in other areas as far as I can determine. Nothing here other then the marchers in the parade and a vigil that night.

From what the media shows, it looks like the whole country is in an uproar. Not so.

Guerrero and Sinoaloa have always been the most dangerous states, even back in the 70's. DF has a demonstration every week about something. I agree that that there have been many demonstrations and violence in DF, and Acapulco. We'll see what happens.