It's NOT Always Paradise in Paradise!

At 7:34 this morning, yes, I looked at the clock, I heard what I thought was a motorcycle revving outside my
bedroom wall.  It went on and on and on.  For once, I had decided I didn't need to fly out of bed at my usual 7:15 to 7:30 routine.

But, I was like the guy in The Christmas Story.  I flew from my bed and tore open the sash, or whatever that sentence is............I DID throw back the curtains.  That's when I saw it!

It wasn't a motorcycle but a guy in the top of the majestic eucalyptus tree on the grounds of the kindergarten going crazy with a chain saw. 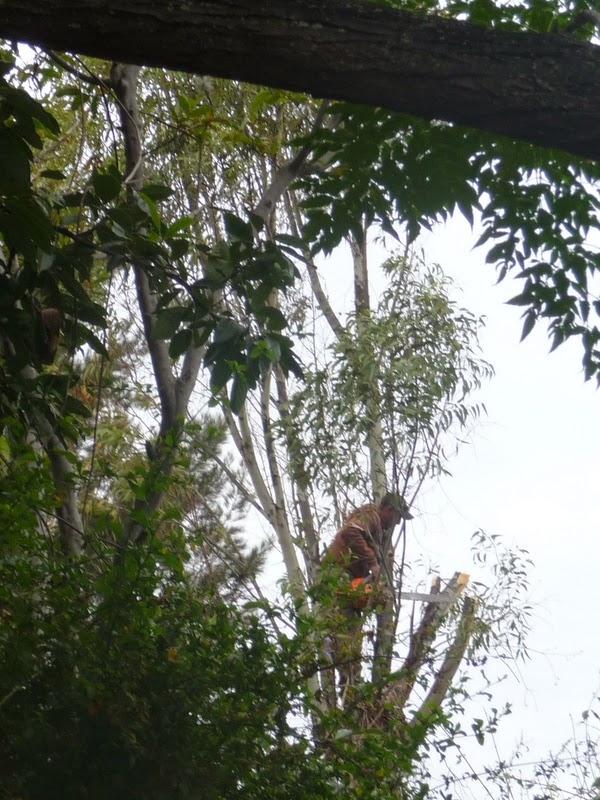 Horrified, I grabbed my camera and in my big fuzzy green robe I stepped out onto the downstairs patio to take his photo.

Little "gets my dander up" like someone with a chain saw cutting down an old tree.  Honestly, if I could have knocked him out of it or could have said something to him (I thought of things to say), I would have.

The sound of a chainsaw is bad enough.  They remind me of the times after hurricanes.  After Hurricane Alicia in 1983, when I lived in Nassau Bay, that was the sound for three weeks.  The town had been built on a  former piece of property where pecan orchards had stood along with old, old cypress and oak trees.  It was so sad and discombobulating to hear and see.

The guys are still out there dismembering the stately old tree.  It's been two hours.  I know they are doing it today because the city offices are closed.  I bet money on it that they don't have a permit.  The principal of that school on various Sundays (no municipal office open then either) has managed to have  at least ten huge, old majestic trees toppled.  Aaargh.

Since this area of Mexico has been deforested,  and there are laws to prevent people from removing healthy trees, this makes me absolutely crazy.

And, it's not just in Mexico.  I've always been this way about trees.  I remember an incident when I lived in Houston.  I lived in a townhouse complex.  A resident decided he didn't like the oak leaves falling on his car so he hired some tree trimmers to get rid of this century old tree.  I DID go racing over there and in my best Spanish, stopped them from touching the tree.  I was President of the homeowners association, thankfully.

So, now, you know my weakness.  Take out a tree and you might suffer my wrath.  Ha.

Think I'm going to have to leave the house.  I can feel my blood pressure being elevated.

This also scorches my tortillas !
Too bad I am not in SMA to give you real support and not just some words in the comment section. I would probably call the police and if necessary would lodge a " demanda " ( even if it was just for cutting down trees without a permit) to let the school owner know that yes, there are people who are concerned and who are willing to act.

A few years ago, the city here wanted to cut down very old and beautiful Jacaranda trees in my colonia, because their roots made a terrible mess of the side walks. There were many neighbors who signed a petition to that purpose. Luckily we were more than twice as many signing a counter petition and the trees stayed.

Droelma, I think of myself as a "guest" in Mexico and would never lodge a "demanda" or call the police. The tree trimmers were hired to do a job and I wouldn't want them to get in trouble for trying to make a living.

Aren't you a resident of this country ?
Residency for me comes with all kinds of privileges as well as responsibilities. And keeping a school owner from doing something that is not only illegal, but also very unkind to the environment that we all enjoy and have a right to is something I would feel responsible for, especially if it is illegal and highly bothersome to me.
But then after 20 years of living & working here, paying taxes and making my life here, I do not see myself as a guest, but a participant with rights and duties alike.
But I agree with you....different strokes for different folks...:o).

Babs - I think you sell yourself short considering yourself a guest here in Mexico. Where you were born is hardly the issue as to where you belong or what you are part of as a person living in a community.

I own three houses in Mexico (I know you are a renter, but also a landlord). I have been here 9 years (you longer). I pay taxes and spend virtually ALL my money here in Mexico. I help my neighbors and they help me - as we share our lives in the same community and country.

Mexico IS where I (and you) live - this is our home regardless of some nostalgia relating to where we were born or lived many years ago. Do not think of yourself as a guest - you ARE a member of your Mexican community and family - bottom line - not a guest.

Calypso, I DO think of this as home and do care about taking care of my neighbors, my home and the surroundings. But, I don't think it appropriate for me to get involved politically or by issuing proclamations, demonstrating, as some do. I like to keep a low profile, believe it or not.
I'm a "live and let live" person, but every now and then I do get upset about things like chopping down trees. Thanks for your message.

Babs - I too adhere (reluctantly) to the Constitution of Mexico demanding foreigners to not get mixed up in Mexican politics, under threat of being kicked out of the Country. I was ONLY addressing the use of the term "guest" as a moniker of your status in Mexico. You are not a guest in any sense of the word. IMHO

Thanks John, glad you agree about not getting involved in politics etc either.
I'm here for the duration. It's the most amazing stress free existence, most of the time.

I LOVE the country and the people.

I really don't want to go around and around on this, but feel I must point out that alerting the authorities that possibly an illegal act ( in other words a crime ) is happening is not " political " activity.
I also stay away from the later, even though my work with the WHO/PAHO more often than I care for pushes me in the fringe area of politics. But for example alerting the authorities to trees being cut down falls for me under " leading by example ".

I'm with you on the disturbing feeling one gets when a majestic tree is disemboweled ;) As we just had a fierce thunderstorm in Merida a few days ago, I get what happens to trees. My small tree fell over. Top heavy without sufficient root system, a tumble is likely. As you probably experienced during your time in TX when the ground is soaked the trees will fall. My son saved a kid's life one summer. They were sitting under an ancient Pecan tree when Patrick heard a crack. He grabbed the kid right as the tree fell right where they had been sitting just seconds before. Anyway, sorry for the loss of the old madame of the kindergarten school. Perhaps a new tree will be planted. One can always hope.