While sitting on the steps at the corner of the jardin on Thursday, two young women and several students in school uniforms were sitting in front of them. 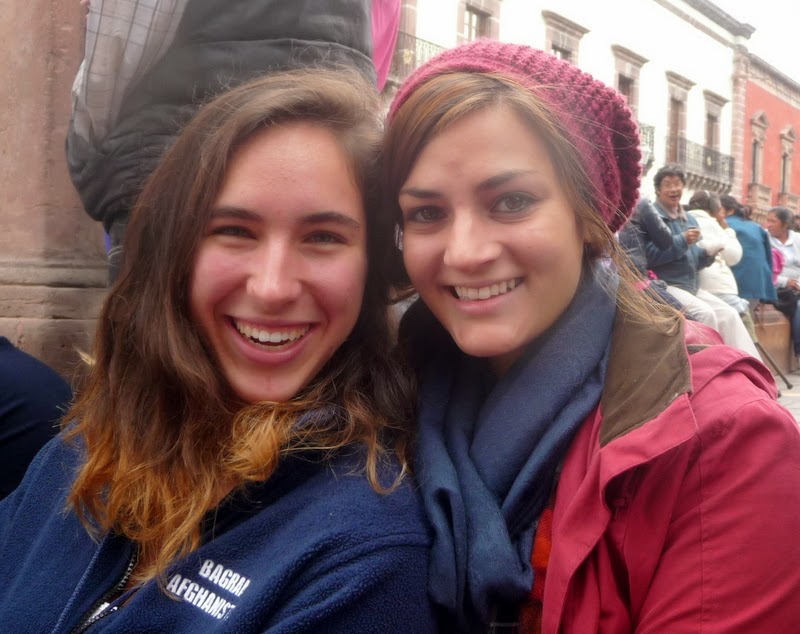 We started talking.  Their vivacious personalities reminded me so much of my three granddaughters.
As we talked, I discovered that they are working and teaching at a Christian school out in the campo near
La Paz.

Analyze is 22 years old and from Ohio.  The town where Smucker's jellies and jams are made.  One of four children, she has been in the San Miguel area since July.  She had come down for a visit previously and returned to work for a year doing "mission  work", as she said.  Previously she had spent time doing the same thing in Haiti.  Wow, was I impressed.

Asher was the other young woman.  Responsible, articulate, always watching the kids, I was totally impressed in her maturity.  Asher is from Delaware and here for a year as well.

The stories of how their families have reacted to the independence of these young women to come to Mexico was intriguing.  Their commitment to living in the country and working with the kids in this
school was more then admirable.

Analyze expressed how difficult it has been not to have her car.  But, she explained, she has mastered
the "not very reliable" bus to come into San Miguel. With no phone and hardly internet service, it has to be a labor of love.

I must confess it would never have occurred to me at that age to take on the responsibilities and workload
that they have done.  It would not surprise me to see my granddaughters doing this however.  My oldest granddaughter has worked with my daughter in the summers to rebuild homes for people and all kinds of other projects.

The project is called Mission Mexico.  The name of the ranch that they live at is Rancho Mariposa.

It was such an unexpected pleasure to meet them and some of the students.  It made my day to know
students and young people with such dedication.  I certainly hope to connect with them again, soon.
Posted by Babs at 2:15 PM

I wish that I knew, at that age, that there were opportunities out there to do such wordly things. Good for them to see what the other side of the world actually lives like. They will forever be touched by this life.

Indeed, Cheryl. I had no idea until my thirties!

I so want all my grandchildren to be aware of the world and all its possibilities.

Now if we could get the other gazillions away from the video games and computer screens to actually do something go, that would be a miracle.

Tancho said...
This comment has been removed by a blog administrator.
5:05 PM

Tancho, I'm blessed that my grandkids are involved in sports, FFA, camping, and very little computer or video game stuff. At least I've never seen it. Now the phone thing is a real pain, but they know that if and when they are with me it is a "no phone" zone! It works.......too.