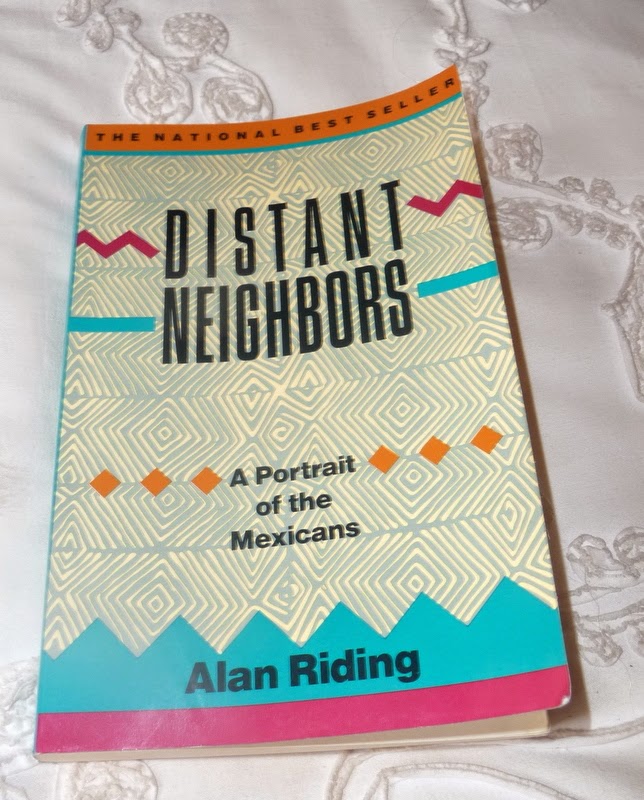 The saga to acquiring this book began several months ago.  I don't remember the circumstances, or who quoted Alan Riding.  It caused me to sit up and take notice.  Having never heard of Alan Riding (sorry Mr. Riding), I knew from his quote that he understood Mexico and the Mexican people.

I made a note of his name and subsequently looked him up on the internet.  Aah, I discovered he had a book on Mexico and promptly ordered it on Amazon in paperback.  If I remember correctly, it was only available in paperback as it was published back in the 80's.  Believe it or not, this is the first time I have ordered a book to be sent to Mexico from Amazon!

Usually, reading a book takes a day or possibly two for me to read.  THIS one has been a month.  At first, I was so enamored with all the information and comments that were so right on that I turned down pages.  Let me say, I don't usually turn down pages and never on a hardback book.  The next time I picked up the book I realized I had turned down 8 or 10 pages.  So, out came the highlighter.  It has been at least 10 years, if not longer, since I have taken the time to highlight a book.  Again, never a hardback.  This book has so much information that I didn't want to forget or poignant comments that I wanted to remember, that the book now looks florescent yellow inside.

My history with Mexico goes back to 1974.  My love affair began then.  I've read a zillion books during the ensuing years, but, never, have I read a book that has this undercurrent of energy and affection for the Mexican people that this book does.  It's hard to explain.  Alan Riding is a fantastic writer and researcher.
I can't possibly imagine how long it took for him to write this.

It goes over the pre Conquest history, each ruler of Mexico, various parts of Mexico and the oncoming industrialization instead of agrarian society.  He talks about the indigenous peoples of Mexico who fear, still to this day I might add, the assimilation by the Mestizo to dilute their culture.  That plus the well meaning missionaries and gringos who want them to learn the ways of the USA, when their cultures are so much purer.

The book talks in depth about the political party PRI and then PAN.  In addition the development of various areas of Mexico and the families who were instrumental in that movement.

Since it was published in 1984, which was the cusp of the growth of the democracy along with the huge beginning of industrialization and exportation brought on successfully by NAFTA, I wish a sequel had been written.

In my humble opinion, Mexico has changed more since 1984 and especially since 1992 when NAFTA took effect then it has in all of its history.  I'd love to hear Mr. Riding's take on all of this.

It turns out he was born in Brazil but educated in England.   He began his career as a correspondent in Latin America - writing for The Financial Times and The Economist.  Then for six years he was bureau chief for the New York Times from 84 to 89.  He was also The NYTimes bureau chief in Brazil.  I checked to see if he had written a follow up but, alas no.  He has just published a book on Paris which I want to read.

Interesting as I always equate Mexico City and Paris together.  There are so many similarities, again, in my opinion.

Hopefully, you can read Carlos Fuentes comment along with others about the book on the back cover.  His enthusiasm matches mine.

As we watch the quagmire at the border, it becomes more and more apparent to me that the US government and the politicians have no idea about their neighbors to the South.  It is appalling and embarrassing to observe.  IF I had the money, I would order a copy of this book for each and every one of them to read.
Maybe it would help, somewhat. 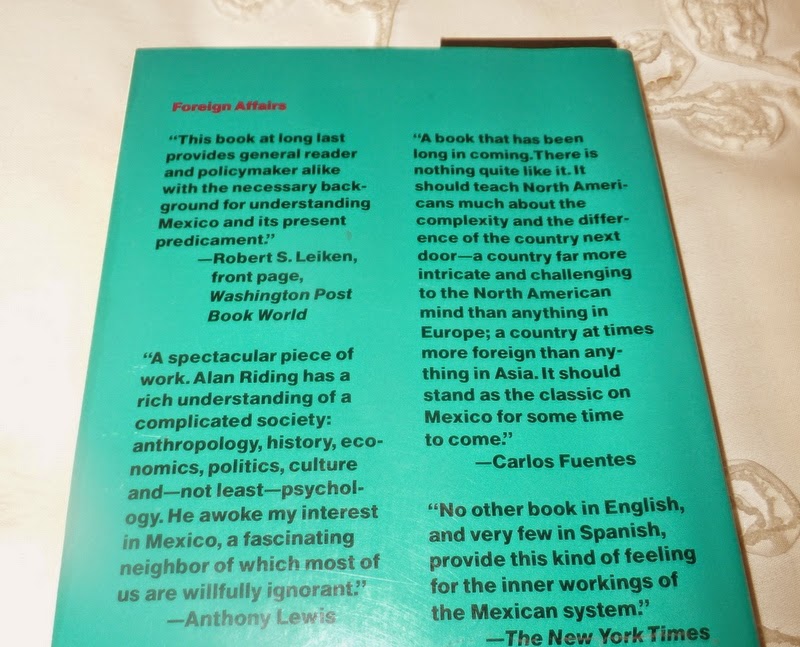 Hopefully some day, probably not in my lifetime, the borders in North America will all be open.  The ebb and flow would be so much more healthy for all then the current process.  One of my greatest wishes.

To me this book was as though the author presented Mexico as a flower.  He gently peeled back each petal lovingly as he shared its history, its culture and its people.  A lovely, lovely learning experience.
Posted by Babs at 9:53 AM

Sounds like a fascinating book. Guess I too will have to go to Amazon and order a copy. (I rarely order things on-line.)
Interesting that your love affair with Mexico began in 1974. Mine began just one year before that when I attended the University of the Americas for one quarter.

Bill, I remember the moment the plane was hovering over DF and I looked out at purple, fuscia and yellow houses. I heart flipped. It has done the same thing over and over and over throughout the years.
I had an example yesterday when I went to make a reservation for a friend at a small hotel in SMA.
I asked the woman if she wanted a deposit, "No." A credit card "NO"
"The person can pay when he checks in or checks out and oh, by the way, there's a 10% discount for a stay over 3 days!" I came home with a smile........That interaction of consideration touches my heart, each and every time.

Thanks for the heads up on this - I just ordered a copy from Amazon. Also - would be interested to hear how well it works re ordering from Amazon (or other places) online for delivery to San Miguel?

As always - thank you for all you share and inspire!

Barbara, I DON'T order to have anything delivered in SMA. I have things sent to Texas and I pick up when I go up or to someone who is coming down.
For two reasons. The mail services we all use charge a fee for the item and the weight of the item. THEN we pay 16 or 17% duty so it is hardly worth it. EVEN if it DOES get here.
Books on the other hand, they don't charge for the value, just the weight, so the softback book was about $1.60USD. So, byt he time I spent the shipping cost from Amazon and the mail service charge, the cost of the book doubled......

I just ordered a free sample of the book from Amazon for my Kindle. If the sample keeps me interested, I will buy a copy. Reading books on my Kindle allows me to highlight guilt-free.

My connections with Mexico started in 1971. I would never call mine a love affair. More like co-habitation with side elements of shacking up.

Cool Steve that you can order a free sample. Nope, mine has been a love affair. Maybe because I worked in Mexico and saw the inner workings besides coming as a tourist, I don't know but it has been a long run with no hint that it will end any time soon.

Thank you for sharing this Babs. I just ordered my copy (hardback and in good condition) from Alibris. My love affair didn’t start until September 1993, when I first walked across that bridge into Matamoras. I haven’t been to your part of the country, but I love the Yucatán and even enjoyed my trips to Ciudad Juárez in 2006 and 2007. Can’t wait to read the book!

Cat, hope you enjoy it and hope you get to the mountains of Mexico and the Colonial cities some day. You will be dazzled.

Thanks Barbara, that is definitely one for the kindle!

Shannon, I truly was surprised at how much I learned!

Anxiously awaiting mine from Amazon. I imagine they have a run on this book after this post. Thank you, Ms Babs for telling us about the book - love reading so much and wishing my eyes will hold out for another hundred years. High hopes, eh? Ha ha

Caddie said...
This comment has been removed by the author.
9:33 AM

Babs - We had a discussion about this book back in March.
Here was the quote you liked ;-)


“The mechanical punctuality and organization of an Anglo-Saxon society, in contrast seem purposeless. What counts to the Mexican is what he is rather than what he does, the man rather than the job: He works to live and not the inverse. He can deal with external chaos if his spiritual concerns are cared for, but he cannot allow his identity to be obliterated by man-made forces. Rather he interprets the world in accordance with his emotions. In an environment of apparent disorder, he can improvise, create and eventually impose his own personality on events. And in the end, in the name of expressing his individuality, he contributes to disorder.” Alan Riding (Distant Neighbors).

YES Calypso! I didn't remember who had quoted Alan Riding but I immediately wrote down the name of the book and the author.
Thanks so much for initially giving the information and the quote. I enjoyed the book immensely.

Any others you suggest I read?

I recently read,"Two Nations Indivisible: Mexico, the United States, and the Road Ahead" by Shannon K. O'Neil

"Without a doubt, the drug war is real. In the last six years, more than 60,000 people have been murdered in narco-related crimes. But there is far more to Mexico's story than this gruesome narrative would suggest.

Hidden behind the headlines is a more hopeful Mexico, one undergoing rapid and widespread social, political, and economic transformations. It is one of a globally competitive economy, a rising middle class, and increasingly influential pro-democracy voters. It is a thriving Mexico whose people, communities, companies, and commerce are intricately tied to the United States."

Thanks Calypso. That last sentence in that quote is something I hope is not true. I see so much international investment from Europe and Asia and South America, without strings attached. I hope that outdistances the USA as it always has strings attached!

I'll have to read that book. Meanwhile, I've learned a lot about Mexico from Geo-Mexico: the geography and dynamics of modern Mexico by Richard Rhoda and Tony Burton. It covers a lot of ground about what makes Mexico what it is today. Don't let the title fool you; it's only partly about geography. The rest of the book focuses on such things as why a high percentage of Mexican beauty queens come from the state of Sinaloa, or the fact that 10% of the electricity produced for DF is used to pump water.

I highly recommend it.

Kim G
Tehuacán, Puebla
Where the geography is particularly beautiful.

Thanks Kim - I'll have to check out that book. Thanks for the recommendation.