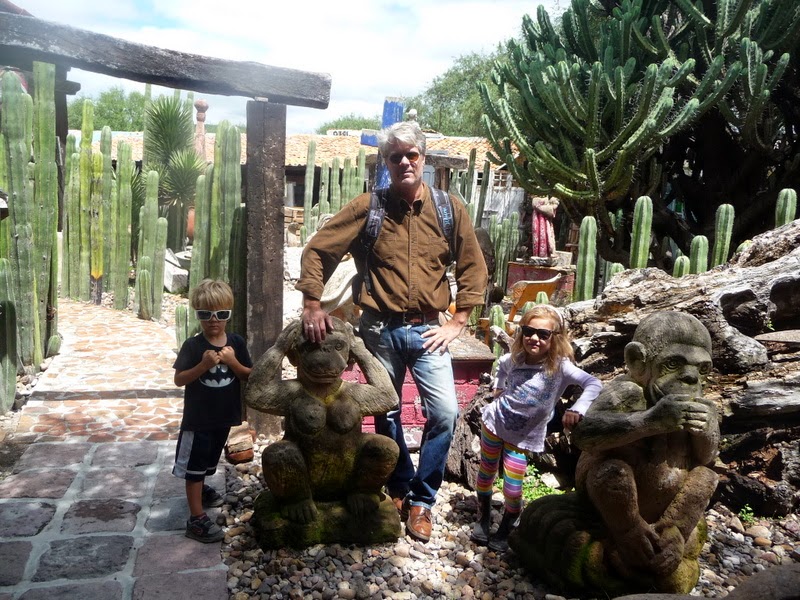 Yesterday started out as a "day of adventure".  When picking up John, Matilda and Sebastian, we talked about what to do and what direction to go.

We finally settled on heading toward Delores Hidalgo because Grammy, that's me, wanted a flower pot to replace one that fell off the ledge and broke.  Ruth's is a good place to find anything that one wants in ceramics.  PLUS next to Ruth's are several big "exploring" places that I knew John and the kids would enjoy while I found a flower pot.

Off we went.  Sebastian asked where we were going and Matilda was saying gleefully, with a Spanish accent, "Delores, Delores".  Sebastian wanted more explanation so I said, "To a junk yard".  Then he wanted to know what junk meant.  I told him it was stuff to sell that the owners didn't want anymore.  His response, "Oh like a garage sale".  That kid is super smart and quick.

I didn't find a flower pot.  They were too expensive for me but, Matilda and Sebastian, along with their Dad enjoyed discovering all kinds of things that I"ll write about in the next post.  This photo of them with some wonderfully carved cantera characters sums up the sense of discovery.

By this time it was near noon, lunch time to Sebastian and Matilda.  Off we headed to Pizza Pig.  A fun place where the kids could run and play while we waited for food.  Alas, it wasn't open yet and wouldn't be ready with food for at least an hour.  NO waiting for little ones.  Off we went to somewhere else after MUCH discussion.

We found a favorite place for lunch.  Then, Grammy offered ice cream cones at Santa Clara.  GREAT ice cream in San Miguel.  As we walked down the street out of the corner of my eye, I saw an elderly woman with extended hand asking for money.  Right past her was an old man sitting on a step doing the same thing.
I was focused on getting to Santa Clara and didn't give them much thought, to tell you the truth.

Since I was leading the charge to Santa Clara, I turned to see if the three were right behind me.  What I saw literally brought tears to my eyes.

Matilda had spotted the woman and man.  She stopped to open her coin purse.  With the most beautiful, glowing smile on her face, she walked up to the woman and told her, in Spanish, that this was a gift. What else she said I didn't hear, but she didn't just give her the money and keep going as most people do.  She engaged with the woman.  And, then with the man as well.

Without saying anything else, they caught up with me and we entered the Santa Clara ice cream place.  My son took one look at me and said, "I know", as he looked at my face.

This little girl reminded me of what a kind Mexican man told me about fifteen years ago.  He said, "We don't give to the children, they can work.  But, we do give to the elderly.  If not for them we would not be here now".  Actions speak louder then words.  Thanks Matilda for the reminder and the lesson.

I was born 20 years after the 'New Deal'. I'm a new dealer to the core, Social Security is and was the best social net our Nation has envisioned.

Bravo to your little ones.

Norm, I'm grateful every day for Social Security. There is a system in place in Mexico, but from what I read it is less then $100 a month for the elderly!

My mumsie had a saying " out of the mouths of babes" in this case it seems fitting. My youngest when he was 8 or 9 and we were going through a nasty divorce I made him come into the bank with me rather than sitting in the car alone. He had his wallet sitting on his lap and in the ensuing argument about coming into the bank he did not feel it fall to the pavement. He had finally saved $50.00 for his lego and we were on the way to buy it. We hunted everywhere to see if it was turned into a shop. Nada someone kept it. He then said that he hoped whoever found it needed it like we needed money because of the divorce. No drama and no freak out and blame.Blew me away and made me cry. Kids can really stun you and make you proud.

What a beautiful thing to have happen, in retrospect! Thanks so much for sharing. Sweet boy!And, I bet he is still that thoughtful.

You were right, in fact I've gotta dry my eyes to finish typing this.

Thanks Cate for posting.

Thanks Ron for letting me know that it made you cry too. I swear I couldn't hardly pull myself together once we got in Santa Clara!
Sheesh.......

That's YOUR granddaughter, flesh and blood.
Be proud.