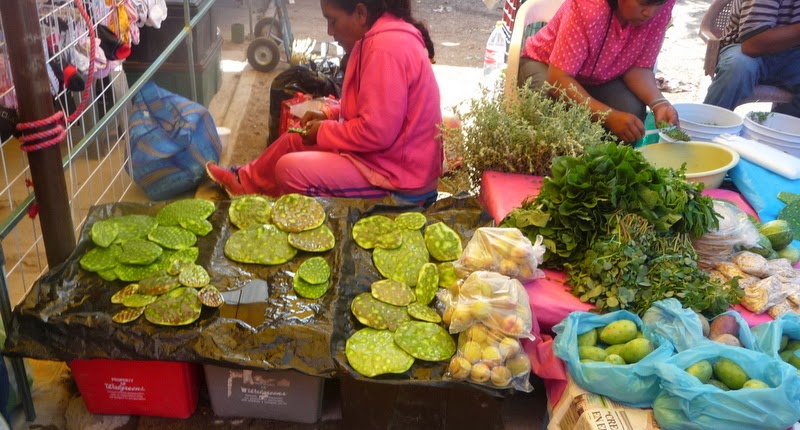 Now that I have wheels again and the car is running as smooth as a baby's bottom, I headed out this week in various directions.  Without a final destination in mind, I just head out and see what happens, if anything. 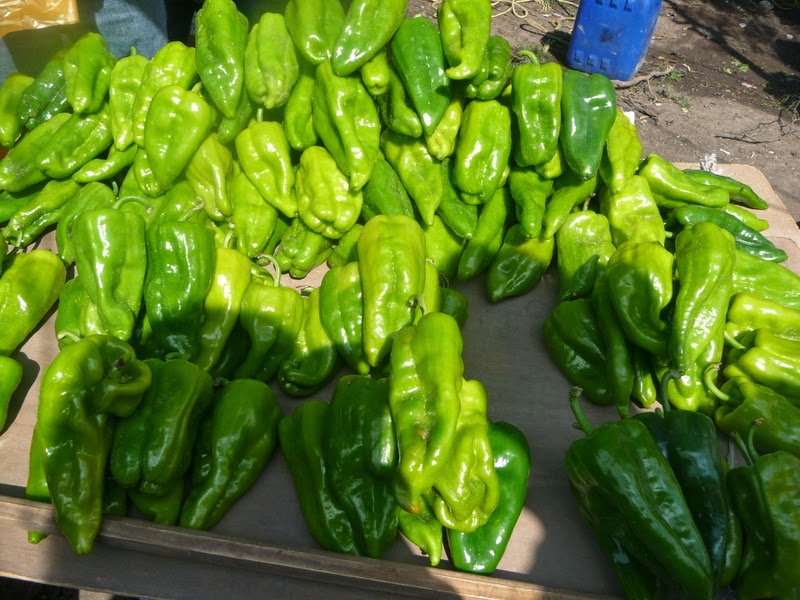 On Tuesday morning, I zipped over to the Tuesday market.  I've written about it many times but never is a trip there the same as any other trip.  With all the crops being harvested at this time of year, just to see the fresh produce is a treat.  The cauliflower and broccoli was beautiful as well as the peppers and all the cactus paddles that were being de-thorned for selling.  A laborious task! 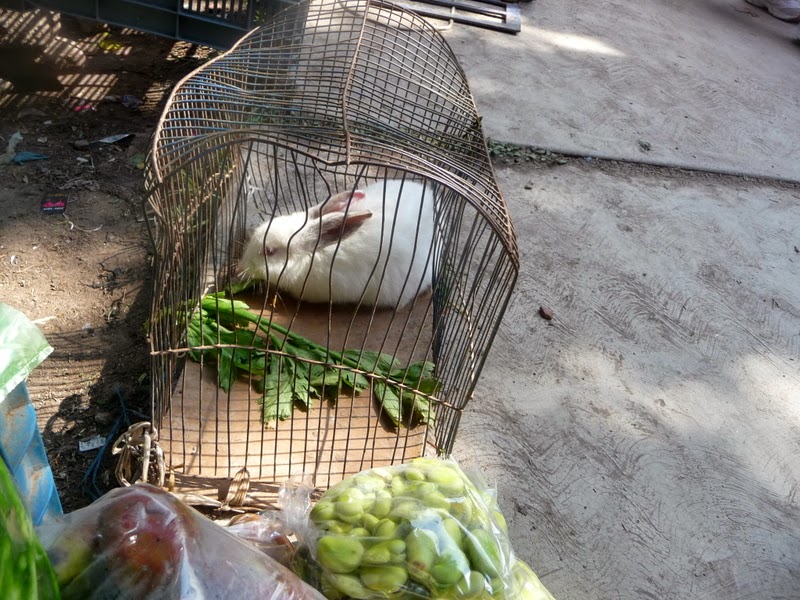 I'm not sure if this rabbit was being sold as a pet or as a meal.  Rabbit is served in many high-end restaurants in San Miguel as well as the rest of Mexico.  The French cuisine influence is alive and well.

Wednesday, my destination was to go to Atotonilco.  The UN World Heritage site only fifteen minutes outside of San Miguel.  It is referred to as the "Sistine Chapel" of Mexico.  It appears that all the restoration work in the main church is completed.  A big festival is being held there this weekend.  The altars were covered with pink and red roses in mass profusion.  A lovely sight. I've written about Atotonilco many times over the years as well.

My next stop was Ruth's.  Ruth is a ceramic factory headquartered in Delores Hidalgo that has a side retail store outside San Miguel.  I needed one flower pot.  If you can't find it at Ruth's, you pretty much can't find it anywhere.  I found the pot. Rather then head back to San Miguel, I headed for Delores.  Stopped at Amore where one can watch the artists hand painting free-style the talavera dishes and pots.  They had huge shipments being wrapped, crated, and made ready for export shipment.  Saw lots of great things there for the US and European market.

Instead of heading back to San Miguel at this point, it seemed like the only right thing to do was to head into Delores Hidalgo to Vicente's for the best carnitas on earth.  They have SEVEN restaurants in Delores Hidalgo! 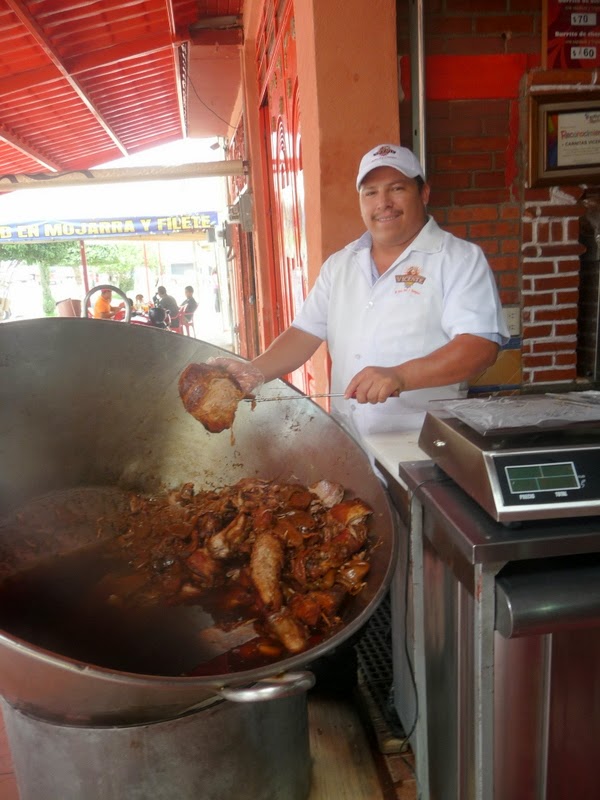 Yum!  They are always so friendly.  Want to make sure you're happy and filled - I always am.  Have never been able to even eat a half order which is carnitas, tortillas, guacamole and salsas. 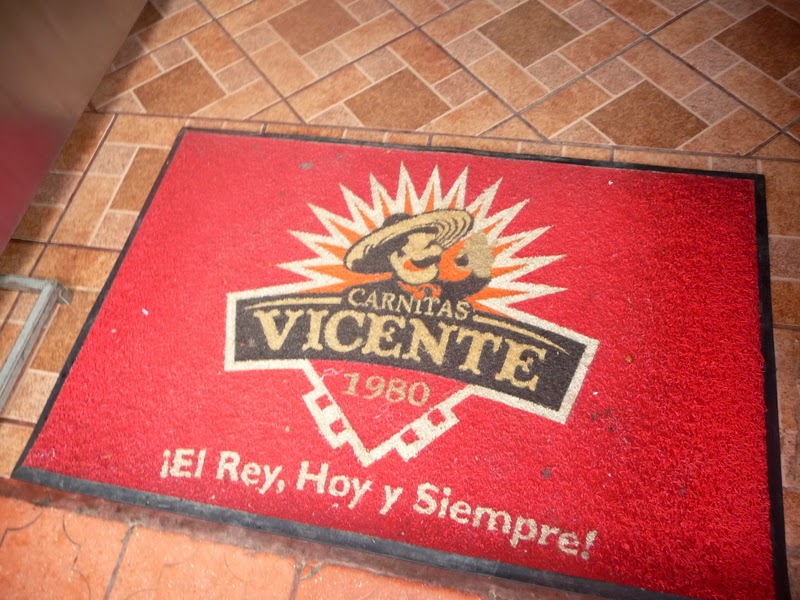 I was having so much fun that instead of heading home, I headed for the huge plaza in Delores Hidalgo.  It is at least four times bigger then the one in San Miguel, if not more.  While eating my ice cream cone, (Delores Hidalgo is known for its strange and delicious ice cream flavors) sitting on the bench, several people came over to talk.  A young boy who now lives in Corsicana, Texas.  A man from Delores who now lives in Rosharon, Texas and a gringo who now lives in Delores with his Mexican wife.  He was originally from Los Angeles.  Obviously, being a gringo in Delores is noticeable.  All were delightful to talk to and to learn about their lives.  Eventually I headed back to San Miguel shaking my head at how unexpected events bring such pleasure. 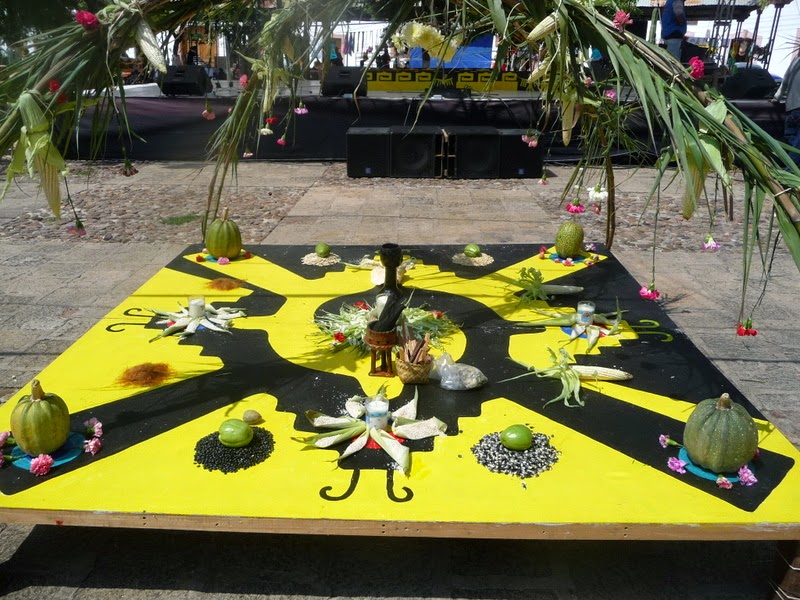 Once I hit the road, I wanted to go more.  So, Friday morning was a trip to Mineral de Pozos.  It's about 45 minutes from San Miguel just like Delores Hidalgo is, but its 1000 ft higher then San Miguel.  The drive is through farmland that is breathtakingly beautiful - especially this time of year.  Mushrooms, broccoli, cabbage, asparagus and corn - lots and lots of corn - to just name a few things grown for export.  All the mushrooms are grown for Whole Foods.  I don't know about the other crops as to their final destination. Approaching Pozos, the mountain peaks are very, very high.  It's a beautiful sight. 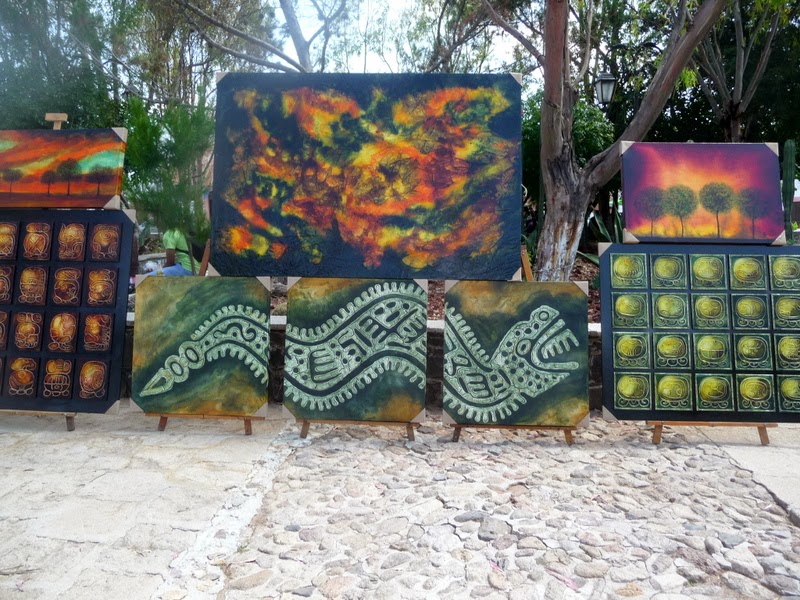 Typically when I drive to Pozos during the week, seeing fifteen people is a lot!  It is an abandoned mining town whose families only seem to come back on the weekends to visit.  So you can imagine my surprise when I pulled up to its plaza on a side street to see a fair being set up.

The lime green and black board was set up for an indigenous ceremony to be held on Saturday morning when the Chichimechas and Otomis along with a tribe from the State of Sonora was going to participate.
Sonora is near Arizona!  A long, long, long way away.  In addition, a local man told me that a rap group from Chicago is going to play Saturday night  Say what?

Wandering around the plaza, there was much jewelry made for sale along with indigenous musical instruments and some clothing.  It's truly amazing how many minerals come from this area such as amethysts, opals, turquoise along with stones that I couldn't identify. Magnificently made filigreed necklaces and bracelets for very little money. 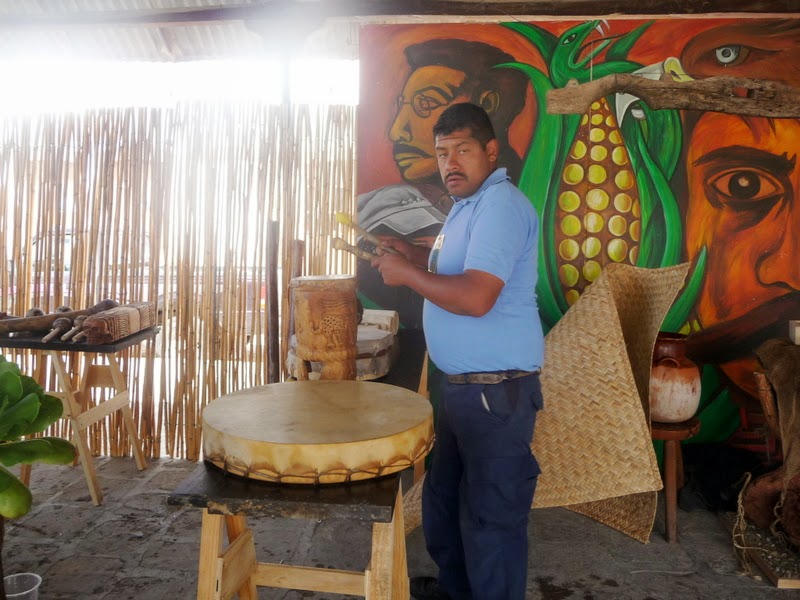 The photo above is a man playing a drum made locally.  Many had beautiful carvings on the sides.
Mineral de Pozos at one time was a very, very wealthy town with silver mines and some gold.  Today those mnes are closed.  They have been closed since around 1910 when the mines were flooded during the Revolution.

It's so interesting when driving up and down most of the streets over there to see no people living on the streets.  However, I must say that yesterday I saw at least 100 people!  The most I've ever seen in Mineral de Pozos.

The week was capped off last night in going to the performance of Doc Severinsen and several other musicians.  Actually there was a total of fourteen!  Most were Cuban with several Mexican singers as well as musicians.  Unfortunately I wasn't able to photograph the event or record the music.  Suffice to say, that although Doc is now 87, to listen to his solo performances, one would never imagine that.

It was a superb evening of about two hours of WOW music!  I had not heard Doc play in five years, but I promise, he is still as talented as ever.  It was a sold out theater.

The town is hopping with all the tourists here now.  This is our summer "high season" just like we have a high season in the winter from the end of November til the first of April.  There were so many events going on this weekend that one would have to be a whirling dervish to get to half of them!  It will continue this way until mid-August when it will slow down again.

Coming up or ongoing, Guanajuato International Film Festival begins this coming week along with the San Miguel Music Festival.  There is a Blues/Jazz Festival going on as I write this.  Heavens, I can't even list it all.
Come see for yourself!
Posted by Babs at 5:52 PM

Very interesting post. It's amazing how many fascinating, little places there are throughout Mexico that the typical tourist has never heard of. I was briefly in Atotonilco and Dolores Hidalgo many years ago. I will have to check them out again sometime.

Doc Severinson! Wow! I remember him from the Johnny Carson Show ages ago. Nice to hear that he is still performing.

Dan, glad you enjoyed the trip!
Bill, it is SO true. Even when I drive through a little town that looks like it has not much to share, if one takes the time to stop, almost always you're amazed at what you find out or the people you meet!
Doc lives in San Miguel. We are lucky to have him here.....and thriving.

Wow, have you ever had a busy week! I love that even though you have lived here for so many years you still appreciate what a treasure it is! There seem to be so many people here who never take advantage of the central location of San Miguel and how easy it is to go a half hour in any direction and find something totally different.

Thanks Shannon. Unfortunately there are some people in SMA didn't come here because they love Mexico! I do and LOVE getting out of town.......being with the people is such a GREAT time!

You are tempting me to head to the highlands. The humidity has something to do with it, as well.

The weather this summer is the best we've had in 14 years! Incredible!

You mentioned a trip to Ruth's Talavera store, just outside San Miguel. Can you tell me where it is? I've asked several people who live here, and none of them had ever heard of it. I really need 3 replacement talavera pots and would love to get them in or near San Miguel. I have been living in SMA for a year and plan to stay much longer. I'm really enjoying your blog. I know you are at your daughter's, being Mom and Grammy, but I would really appreciate any directions you can give me. Thanks

Nikki - It is on the road to Delores past Atotonilco. It will be a long white building with multiple entrances. No sign I don't think! Right past it also on the left side of the road is a junk yard kind of place with all kinds of stuff for sale. Ruth also has a big store in Delores in centro as do a zillion other manufacturers. You can also get talavera pots in the mercada by Plaza Civica. Glad you're enjoying the blog.