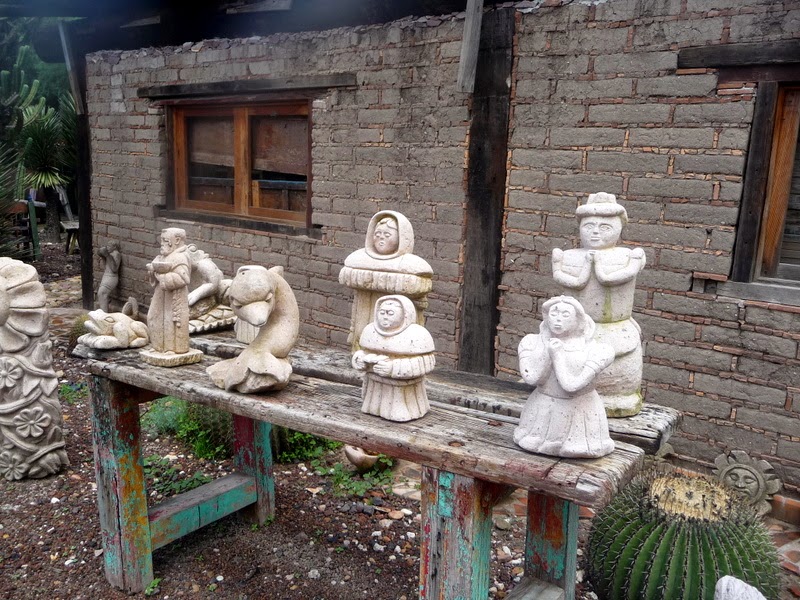 In the mid 80's trips to Mexico to find decorative accessories and furnishings for Tex-Mex restaurants were a normal occurrence for me.  Those trips went on and on for almost twenty years  The first trip was flying into Guadalajara to discover factories who manufactured glass, mill work, tile, chairs, tables along with decorative accessories.

Restaurants in Houston and Atlanta, Georgia were the final destination of this first trip.  It was a hoot!  Nothing to me was more exciting then finding a source for a needed item.  The way we found the "factories", which in US terms are usually only a few rooms with a gazillion people working in them, was a hunt!  To find
the glass factories one drove up and down the streets looking for piles of broken glass outside.  Not a sign was to be seen back in those days - just the rubble of items that couldn't be sold.  On the other hand, to find a paper mache factory, one looked for examples to be hung in the doorways. No one had phones then so they hung their merchandise like that so people would know what they made.

On the first glass factory trip, glassware needed to be manufactured to meet TABC standards - that's the Texas Alcohol and Beverage Commission.  They come in to a restaurant and measure the glassware to make sure that drinks are not being made stronger then allowed!  This first order was all the blue rimmed glasses that were so popular thirty years ago.  I came armed with Tupperwear measuring cups, a baby bottle I think and that was about it.  It would be hilarious now to see photos of that first episode and our measuring water over and over to get each order of glassware correct. 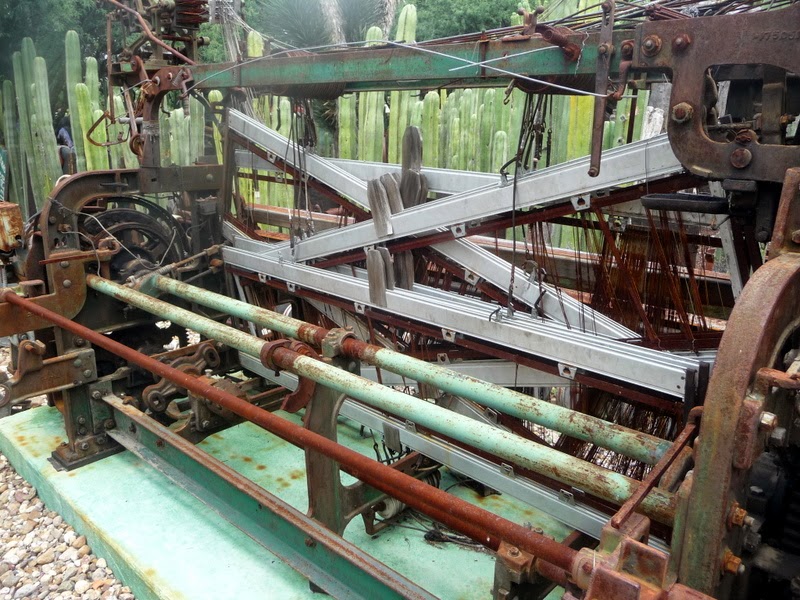 Mexican chairs for the most part still have a straight back, not the ever so slightly tilted back that is needed for comfort.  So, chairs had to be designed and made.  Literally, once we designed the perfect chair with leather strap seats and backs - the seats were 19 inches, which is another important thing - we shipped eighteen wheeler loads both to Houston and Atlanta.  A favorite chair of many restauranteurs. 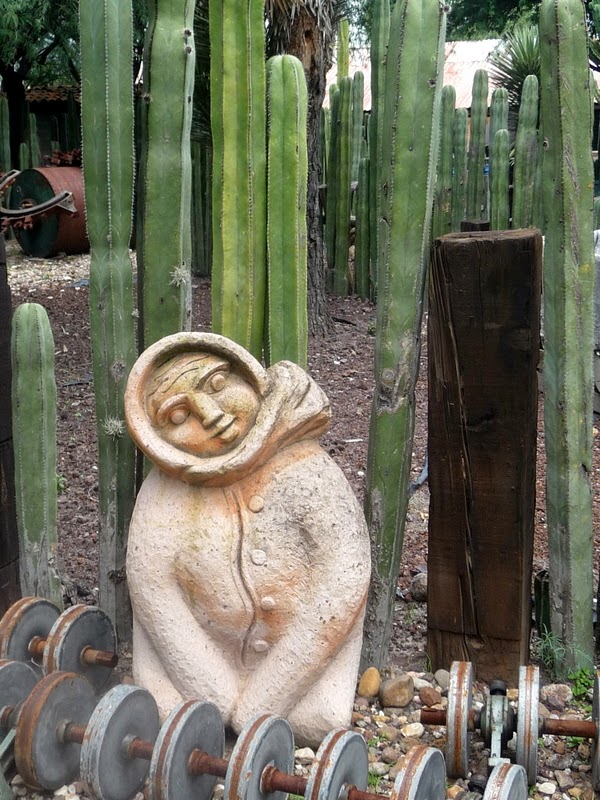 While out a couple of weeks ago with my grandchildren in a yard of all of these items shown in the photos, I felt that little thrill race through my body that I used to feel upon finding a unique item or an item that would be perfect for a project.  Not photographed but found on this trip were several kinds of Corona coolers, Corona metal tabletops, a cool cash register - all things I could imagine in a project.  It almost, but not really, made me want to get back into sourcing for restaurants and hotels. 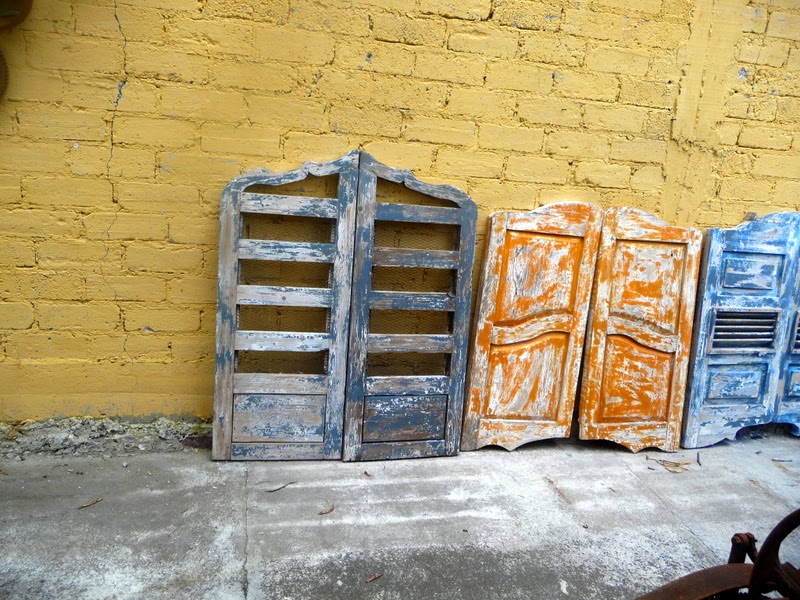 It seems the 80's and 90's were me in the right place at the right time.  I knew Mexico.  I knew where to go to get the stuff and ended up designing well over 100 Tex-Mex restaurants throughout the USA.  The greatest part of it was getting to spend time in Mexico in the countryside seeing and doing things that others had not yet discovered.  I treasure those memories. IF I didn't know where to go, I'd go to a cab stand, find someone who had lived in the USA who spoke English and off to the villages we would go!  Exploring at its best........ 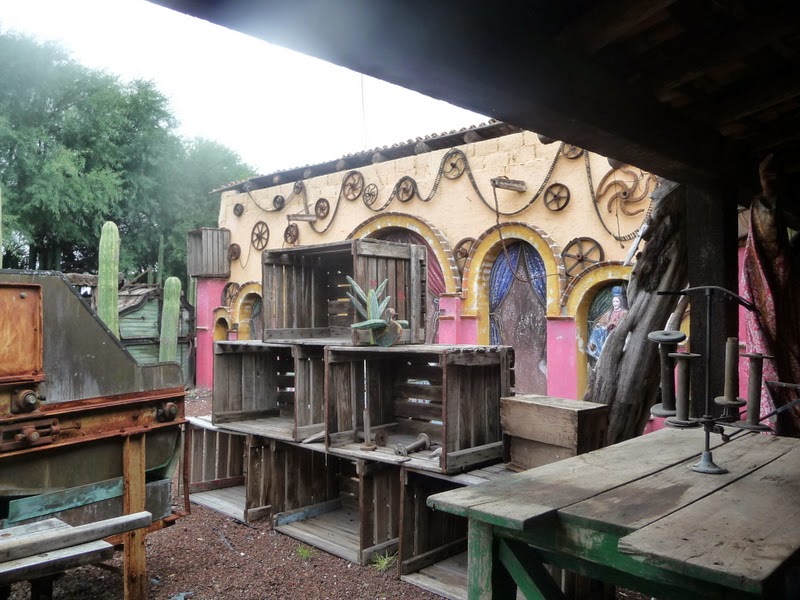 There wasn't a thing in this yard a few weeks ago that I couldn't have thought of a use for on some project.
It felt good to feel those creative juices moving around again.  Great stuff. 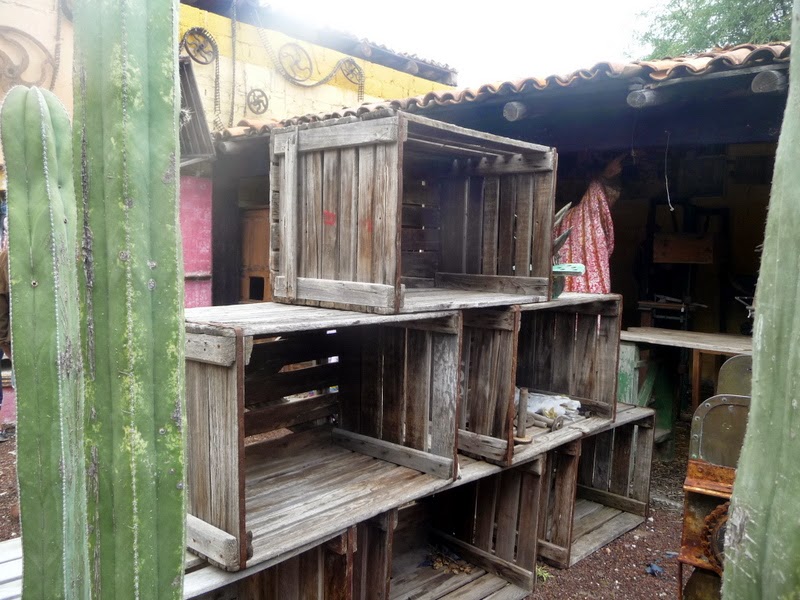 In fact, in a "ahh haa" moment I realized the reason the History Channel with Canadian Pickers and American Pickers are my two favorite shows is because some of it was me for years on the back roads of Mexico as they are in the USA and Canada for those guys.

Then the other day, when a friend was staying at the Quinta Loreto Hotel in San Miguel, I ran into an old friend from Houston who has had a retail store there for probably thirty years.  He used to import from Turkey, Afghanistan and distant places.  Now he's down here looking for things since it is so expensive and difficult to import from those faraway places.  There is still plenty of stuff down here, but, not at the prices we used to get it for.  Those were the golden days, to put it mildly.

You can tell I was never a designer who ordered from a catalog, but rather was ALWAYS looking for the unique and different or designing it and having it made.  What fun it all was......

The challenges of finding freight consolidators, shipping companies, craters and border agents was just that, a challenge and not something that couldn't be overcome.  Now it is so much easier with NAFTA to ship.  But finding the items and having them made still takes someone willing and interested in doing so.

It sounds like it was a really fun job... plus the chance to travel to Mexico all the time!

Bill, it was the best part of owning the business! Plus, at the time, when I was in Mexico no one could reach me! ha......

Even non-collector folks like me enjoy the thrill f the hunt up your way.

And Steve, if you ever get a place, I"ve seen things that would be PERFECT for your new place! Really!

Caddie said...
This comment has been removed by the author.
8:52 PM