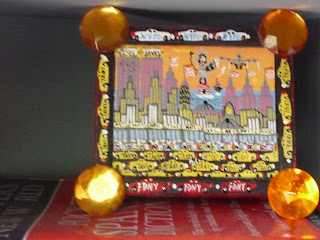 I've done it!  Probably a year or so ago I admitted to myself I had reached critical mass.  Not another inch of space to put one more thing.  Not even a half inch.  I have been satisfied with that thought now and have not been tempted to want to buy anything in the realm of outsider art, Haitian art or folkart..............until today! 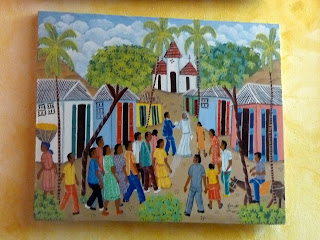 I received an email from http://www.slotinfolkart.com/ reminding me of their auction this weekend.  They also reminded me that I didn't have to be in Georgia.  I could purchase online from the comfort of my bedroom computer while gazing on the vibrant, fuscia bourganvilla outside my bedroom wall of windows.  Uh oh. 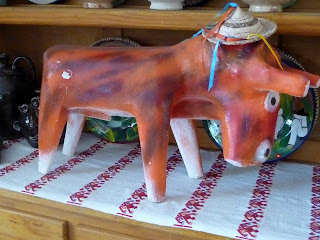 Uh oh is right.  Just for the heck of it I decided to look at the online catalog to see who of the artists I have collected possibly had work up for auction.  Yup, there was Benny Carter, Haitian art, Mexican folkart, B.B. Craig face jugs.  Oh well, I already have things by those well known "outsider" artists.  Wait, they also had works by Vollis Simpson - his wonderful whirligigs.

I so remember being at his place about four or five years ago.  The wonder of his creations, big and small would have delighted the child in all of us.  I so wanted to acquire one of his creations - still do.

Oops also Mose Toliver.  An illiterate black man who used any materials he could find in Alabama to create.  Shoe polish if he couldn't afford paint.  Old boards or whatever to paint on.  His work is very, very distinctive.  His work has such a naive, simplistic look. His work has escalated in value.  I would so enjoy having a Mose Toliver piece to look at daily.

Last, but certainly not least is Jimmy Lee Sudduth who created in Texas.  I don't know what to say about his work other then I get a knot in my chest when I look at his work.  Isn't art supposed to move you? 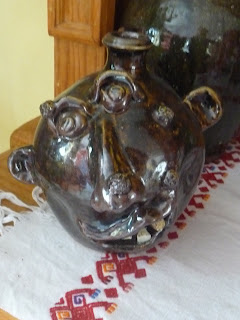 The photo of B.B. Craig's face jug just disappeared from this screen.  He was the "father" or founder of what has become a huge genre of pottery.  I even journeyed to see all the face jugs one could possibly experience several years ago.  An example of one I bought is above. 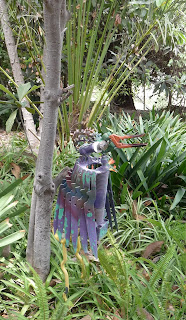 The trips I've taken to meet the artists, the enjoyment of looking at these quirky pieces on a daily basis have enriched my life.  The above piece of "used refinery equipment" repurposed into a bird or crane was purchased in Wisconsin at Foreverton.  A huge environment with creatures as large as two story tall buildings.  It takes your breath away as you walk among the creations of Dr. Evermore.  Wouldn't Dr. Evermore be surprised to see this creation in a garden in Mexico? 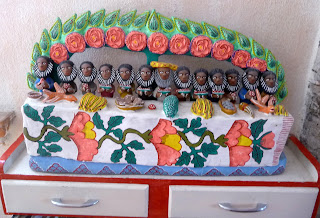 If you're looking for a new interest in your life go to the website of Slotin and buy one piece that speaks to you.  Much of these things are not expensive.  You will be surprised.  Well, the work of the well known outsider artists can be pricey, but definitely not in the realm of the typical art market.  It's fun to expand your horizons and learn something new. 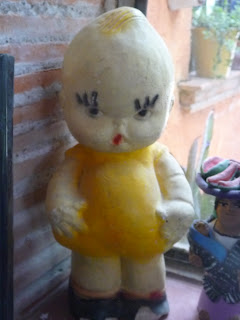 One of the last pieces I took a photograph of today is a Kewpie doll from a carnaval years ago.  I've had her so long and moved her so many times that I don't even remember when or where I bought her.  I know it has been at least forty years ago.  Even though I usually sell things within ten years of purchasing, some things I keep forever. She is one of them. It makes me smile everytime I look at her.

Oh God, you and me both. No more stuff, no matter how tempting!

I have to get rid of much stuff before moving my stuff to Mexico where I can buy more stuff.

Exactly Mike - something I did when I moved here.....how I acquired this much more stuff is a mystery......ha.

Kay, you and I definitely have more stuff then we could possibly want or need!

But then--art and collecting things that move us isn't just stuff. Right? Stuff is stuff but things we love become apart of us and express our love of the world and all the things we love including stuff :) Love your gal too. Keep her. Those old chalk dolls and animals from fairs are wonderful. They have the best faces.I pause when I see one and wonder who made it. Maybe they were made in a factory where people sat lined up and painted dolls all day. Can you see them having fun? If those old chalk dolls could talk . . .