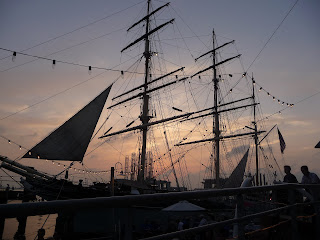 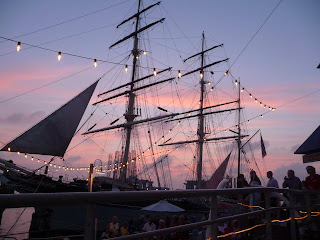 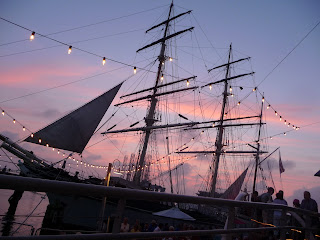 Having been privileged for the last two years to be in Galveston when the "Plank Owners Gala" took place, I thought I would share with you some photos and facts about Elissa. (I seem to be on a ship theme lately, don't I? First The Titanic, now this.) Oh well.

It is a magnificent sailing vessel known as a barque because of its sails and rigging. I was on it once, when it was first restored back in the 1980's and I had a sense of all those who had stood and worked on it when it was a merchant vessel somewhere in the world. It was a surreal feeling. The Elissa first sailed in 1877 and is one of the oldest "tall ships" still in service today. Magnificent is an understatement. To me she is so beautiful and regal that I get a catch in my throat when looking at her, just as I do when I hear The Star Spangled Banner or at other emotional times.

She's NOT a replica but a survivor. Most recently having ridden out Hurricane Ike while moored at the Texas Seaport Museum in Galveston near the wharves. It was an amazing and audacious thing. She was built in Aberdeen, Scotland. Sailed under the flag of other countries before she ended up in a scrap heap in Greece. There she was found and purchased by the Galveston Historical Foundation in 1975 for $40,000! Some hull repair work was done in Greece and then she was brought to Galveston for many, many, many hours of volunteer restoration work.

Sailing for the first time after restoration in 1985 with a trained volunteer crew, she was ready then to participate in the Tall Ship salute at the Statue of Liberty in 1986.

Fast forward to this year when I was at the Plank Owner's Gala. By the way, a plank owner, in case you don't know, is an individual who was a member of the crew of the ship when it was placed in commission. Hence, the volunteers who restored and sail The Elissa. All the money from the Gala continues the ongoing maintenance and care of the ship.

So, as I sat behind the illustrious auctioneer, Vandy, this year with the able assistance of his wife Sue, I was more interested in watching the play of light and sunset through the rigging then bidding on trips, and other stuff. The first photo I took I thought was beautiful, then the next and then.........well, I took seventeen photos as the sun changed colors and the ship became ethereal in the light.

Hopefully these photos will be enjoyable for you. And the next time you're in Galveston or wherever there is a Tall Ship, go see it. Magnificent comes in all forms.

It is a beautiful ship! Nice photos of her!

The real estate agent who sold me a house in 1986 in Houston, and who later became a friend, was a crewman on the Elissa. He died prematurely in his 50s, alas.

But the Elissa continues on.

Felipe I miss Texas too. I take Texas Monthly magazine and this month it was all about "Where are you from?" Very enjoyable. One of the things I love so much about that state is the "can do" attitude.