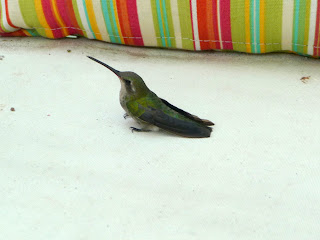 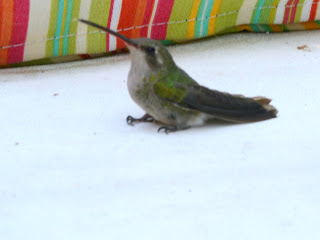 It hit the window with such force that I thought its beak would be impaled in its head. Not, thank goodness. But the impact threw him onto the chaise on his side with one wing outstretched. The other wing, not to be seen. What to do?
I decided to let it get over the shock, if it were still alive.

I was sitting on the other chaise across the patio, maybe six feet, and I kept looking over at it over the book I was reading. The other part of my brain was saying, "What the heck can I do?" So finally, after a few minutes, I got up, walked over to see if it was alive. It was much to my amazement. I used the arm of my sunglasses to tuck the spread out wing back to its body. I pushed the bird from its side so it was on its feet. It didn't fly. It just stayed there.
Then I looked closely at its other side to see if it had lost a wing or something but no, it had both.

So, I sat back down and watched and waited. Hmmmm. Then I snapped to it and got the camera to photograph a hummingbird, close. That actually didn't occur to me for at least ten minutes. I was so concerned about the bird. I got close and took these two photos. He was looking at me and I was looking at him, obviously. I finished the photos, stood back and much to my relief off he went in his kamakaze fashion. So, so fast. Whirling and flying. Happy days!

He just came to visit and wasn't skilled at knocking on the door. What an encounter and so glad you grabbed the camera...never a dull moment south of the Border.

aaawww, I have had the opportunity to hold a few in my hands after they had exhausted themselves by not being able to leave the garage on their own. They are sweet little creatures. Have very kind of you to give him a peaceful relaxing place to recoup.

Sweet little creatures? Ha! They are about as ornery as birds come. They loathe each other in particular. I guess they turn that loathing off a short spell for mating.

But they are cute and improve the overall fabric of the universe.

Chrissy - They ARE sweet when they're still but boy when they are dive bombing each other they are very territorial! I have about 10 each day and they zoom at each other.

Felipe - I agree they are very aggressive......surprisingly so.