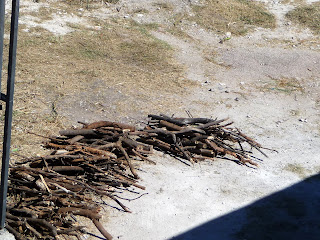 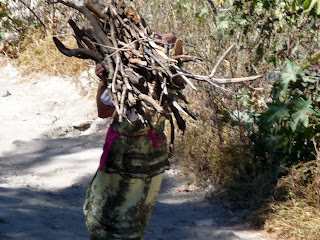 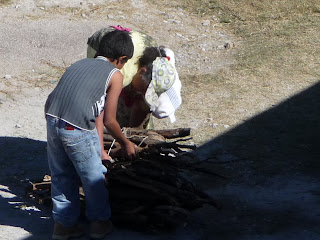 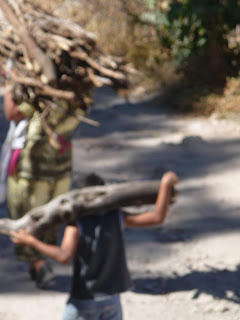 As I peeked over the wall from the roof terrace yesterday afternoon to see if the parents had finished cleaning up the side yard of the school, I thought it interesting to see four piles of wood neatly stacked. I knew something or someone was coming for that precious wood. We live in the alto plano with limited large trees. Many of the families still cook over woodburning stoves. I knew it would not be wasted.

I was right. Shortly the woman from down the hill appeared ready to haul off the wood. I think she is the same woman where the goat herd lived before it disappeared. No, the goats didn't live in her yard, but, rather they went inside her house every night when they came up from the canyon floor. She would milk them and sell the goat milk. About a year ago the goats disappeared. Lock stock and barrel. Along with the crippled shepherd. I missed them so much for a while and have often wondered what happened to them. I also wondered how this woman survived without the money from the goat milk.

So, I watched with fascination as she trudged carefully down the hill with the first batch of wood. If it had been me, it would have been four trips. But no, she combined all the wood into two piles. Her second trip up to the school she had either a neighbor child or a grandson with her to help carry the bigger pieces down with her.

She hoisted this second bundle, bigger then the first, onto her shoulder and determinedly headed back home. The young boy was carrying one of the bigger logs on his shoulders. The last picture of them walking down the hill is slightly out of focus, but I just had to include it because to me it says so much.

Every day is another segment of the "real" life of San Miguel.

Yep, that's the real life...what goes on under the veil of church bells and pageantry, Internet cafes and art schools, tourist shops and galleries.

Good for you Babs, this is real life for many more than those that get to enjoy the easier side of SMA.