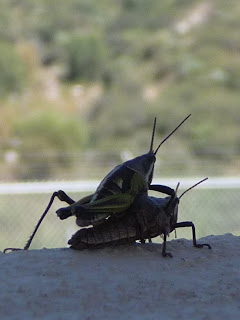 THIS scenario is quite funny, to me anyway, and interesting, if not astonishing. Whatever this creature is on the bottom, it walked along the wall all the time that I was photographying scenarios one and two. I mean it plodded and paced the top of the wall like a father in the waiting room anticipating the birth of a newborn.

The first time I saw this creature going east on the wall, I was interested. But, when it turned around and came all the way back, I became mesmerized in whatever was going on. A ritual? A mating dance? Or a worried bug? Heck if I know.

To me it looked like the spaceship Columbia with the shuttle on top when it used to dip over NASA. This occurred every time it had to land in California and then be trasported back to Florida for the next launch. It would fly low over the area we lived in across from NASA. Many, many families would come out of their homes, stand in the front yard and wave. It always made my heart swell with pride.

So my "shuttle bug" just kept on with its mission. Five times this bug made the long trek from end to end of the wall.

Anyone have any idea what it is and why it was doing that?

Just one of the many things I saw on Sunday while enjoying the roof terrace..........life is a trip, isn't it?

It (they) look like a cricket of some sorts.

The joys of being in Mexico. There is so much to see and for the senses to take in if only one takes time. We can't wait for our return.

Also, thanks for sharing the lady and the boy carrying the wood. We stop and count our blessings every day.

It looks to me like a shieldbacked katydid (Anabrus simplex) which is sometimes referred to as a Mormon cricket. Be careful...they bite. They like to sneak up on you while your sleeping and tweak you on the end of the nose :)

so was the other bug on top of it the entire time? looks like someone or something is having a good time. yeah, i would say it's definitely some type of mating ritual.

A cricket who somehow ingested a viagra tablet?!

Yeah, ya'll if you notice the bottom bug is really dragging ass........carrying that other one around the whole time.
Geez thanks Bob, now I need to watch for a creepy bug to get me! Well, in actuality, some things never change, ha........
Yes Sam and Bob, I too count my blessings every day also and am grateful too.
Mating ritual was what I thought to Teresa and luckily Charles, Viagra can be bought in Mexico without a prescription. (I've been told) Hee hee.

I hope you threw them off the roof - that way Bob's scenario won't become reality while you are asleep one night! Or do you think they would make their way slowly back?? So much to learn about beautiful Mexico! Thank you Babs, for sharing your amazing life. Hugs, Robin

Mmmmm, ahhhhh....Robin, I was just joking about the bite on the nose. Babs knows that I am a jolly joker :)

Robin - It was a long way down from the ledge to the ground and I don't touch bugs - YUK. Besides, I KNEW Bob was kidding - hopefully. Thanks for confirming that, Bob!

Oh, Babs and Bob - I AM gullible!! It won't keep me from loving Mexico, though. The laugh's on me!