The future of Mexico! 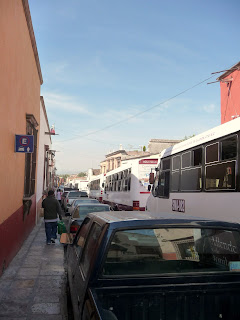 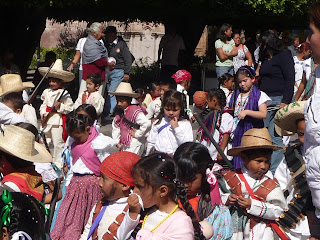 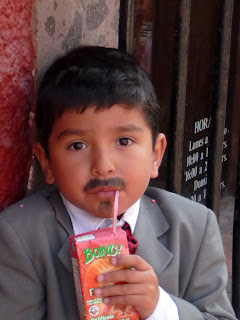 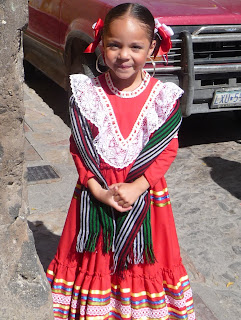 I've said it before and I'll say it again, "One MUST be flexible to live in Mexico". I thought this last evening and I saw it in action today, over and over again.

I was supposed to go to Pozos today to visit my friend Gayle and to see her newest assemblages. They are selling in galleries now and going faster then the proverbial hotcakes, so I wanted to see them before they are all sold. Well at about 8PM last night THAT plan changed and the trip was moved to Saturday.

Ok, no problem. I had a list of "things to do" and I could always do those. Then this morning while getting ready to head down the hill, the phone rang and a delightful friend is in town from Sarasota. We talked and made plans to meet at Aurora for lunch to catch up on the last three years.........

Ok, no problem. I DO head down the hill and as I come around the corner at the intersection of Nunez and Mesones, a policeman pulls his motorcycle up and doesn't allow any traffic onto Mesones, one of the main streets into centro. What the heck? Then I looked farther on down the street and there were buses for as far as I could see. I said to him, "Desfile?" and he rolled his eyes and said, "Si".

I had asked and asked and been told the kindergarten parade of the wee ones dressed up as revolutionaries was scheduled for Friday. Obviously I was not the only one with the wrong information. The bus passengers were all bailing out of the buses and standing on the street to see what was going on.

I turned another corner and lo and behold.........there they were, all the mini revolutionaries. The future of Mexico.
A gaggle of little ones. I have to talk to myself when I see them. I say "You have enough photos from previous years (an understatement)" and "just keep walking". Ha, it never works. I'm out there bending down and taking photos one right after the other. It's a good thing my Picasa blogger site only allows me to post 4 photos per blog or ya'll would often be inundated with many more photos. Especially when it comes to the kids.

So, I was way laid, got photos for almost an hour and then went about my errands. SO glad I had my camera!

It certainly wasn't the day I had planned BUT that is the joy of living in the moment, Mexican style. Viva Mexico!

Just think that each little town has the same priorities. I am constantly amazed while I sit sipping my coffee while transfixed on the weekly parades on our plaza. Every week there are at least two, if not more displays of organization....only in Mexico!

Oddly enough, last night I went to the 13th Annual Tour de Cine Francés en México in Mérida and upon leaving the theater had the wonderful experience of seeing the lobby packed on both sides with teenagers and 20-somethings waiting to see the premier of one of the vampire movies. It was a unique opportunity to walk through the middle of a crowd of them packed in with nary an oldster in sight. I had the same thought about Mexico's future as we passed the line of young men and women spilling out into the mall.

Your photos are lovely and the children are so beautiful.

No matter how many times you ask or who you ask, you can never be sure of when an event will take place. The children are adorable.

All the photos are wonderful, but that little boy with the painted mustache and juice box is just too precious! Love your blog and I don't miss a single installment!

Great photos. I really miss SMA and all of the unexpected activities. Will be there soon.

Only 4 photos allowed? I'm sure I've posted as many or more, or at least seen others' blogs with more.