During the move, as I sorted out fabrics and textiles to sell or to bring with me,  one item that had
resided in a garment bag all my life was rediscovered.

It was given to me around 1945 by my Uncle Bud when he returned from Japan after World War II.
I know none of the details of how it was acquired or where or anything, but it is something that I was
always told to take care of as it was/is a treasure. The tiny label says Made in Japan and the size 45.

Since it has not been hung or anything in daylight, it appears the colors are as vibrant and colorful as though it is brand new. 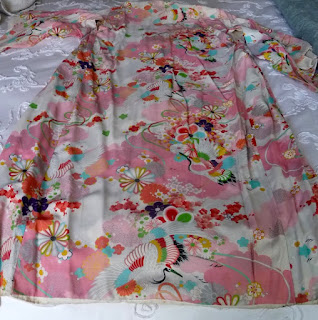 To me, the mystery of whether it was a kimono or an undergarment, worn under a big beautiful kimono or just what was its purpose, has always been a puzzle.  Then one night last week I had an "aha" moment.  I remembered that a woman who had grown up in Japan had rented my house last Spring.  Although she arrived after I had left for Texas, we have been Facebook friends ever since.

Immediately an email was sent to her asking if it was a kimono and any other information she could give me about it.  She confirmed that it is a child's kimono!  That the symbolism of the cranes and flowers indicated that it is a spring kimono.  Well, the thrill of this bit of information was amazing! after SEVENTY years of not knowing. 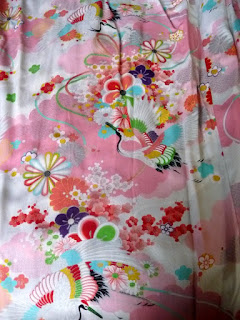 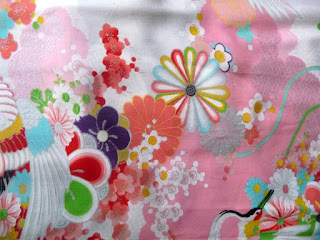 Another email was sent to ask if it could be cleaned and did she think it was handpainted as the surface of the colors seem to stand out.  Handwashing was suggested and that it was probably hand loomed.  Afraid  to handwash it for fear of damaging it, it is just going to be enjoyed just as it is.

BUT it is going to be out somewhere, where for the rest of my life, it can be enjoyed rather then being hidden away to not give joy in its beauty. My photographs do not do it justice.

Ironically, in the last six months I became aware from a facilitator that works with Immigration, that many Japanese are moving to our area.  There is a young girl who attends school with Mati and Mati has been learning Japanese and also how to write it.  Who knows what path this kimono could lead me down, if I am able to share this with some of these new arrivals?

Something this old might open a whole new world for me.  Isn't life just a GRAND adventure that from one day to the next one never knows where it will lead us?
Posted by Babs at 5:03 PM

Babs, when Beach and I were spending a lot of time in Maui and Kauai in the 1980s and 1990s, we attended a lot of King Kamehameha quilting festivals. The Hawaiians handmake some of the most beautiful light weight quilts with old Hawaiian designs and old Japanese designs from the islands. The antique ones (made by Japanese women living in the Hawaiian islands during World War II who were incarcerated and had a lot of time on their hands) were pinned and framed on non-acid mats and then sealed from oxidation with non-glare glass. They may now be seen in museums on Oahu. Your beautiful childhood gift could be done the same way since it was hidden away from the light and pollutants. It may not be a cheap project; but personally, I would get an expert to take a look at the possibility. Once preserved, you would enjoy seeing it every day and so would your grandchildren.

Great thoughts Dee. When I designed an Asian restaurant in Houston in the 80's, the owner had the most incredible wedding kimono that was an antique. We sealed it in a floor to ceiling four-sided plexi box (very expensive, but well worth all the press, the visitors and the comments over the years.
There are no experts in SMA, but I could do that and it is a possibility to hang in horizontally rather then vertically in a container over my bed, away from the direct light.

I've always been an quilt lover and never knew about the Japanese women in Hawaii. I would love to see their work! I'll google it and see if I can find any photos. Thanks for sharing....

I firmly believe there are no coincidences in life. I look forward to hearing about the path this treasure will light.

Barbara Lane - Indeed! I really want to enjoy
looking at it after all these years. Hard to believe
it might be at least, if not older, then I am! ha.


Steve, me too. No coincidences! I'll keep you posted.