A Picture is Worth a Thousand Words - Here are Many

It is not even Christmas yet but it sure has been busy around here!

First it was the 55th Birthday on the 19th of December for my son John.  It was a lively celebration of family only - even though the kids and I wanted to invite EVERYONE.  Not John.  Here are the photos........ 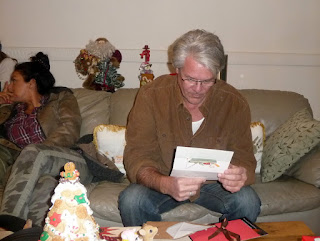 Notes, cards and gifts. The kids wrote him "private" notes. For his eyes only! 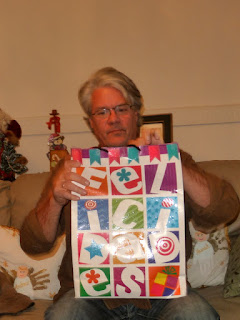 What was in this bag, that was firmly stapled, is at the end of the photos 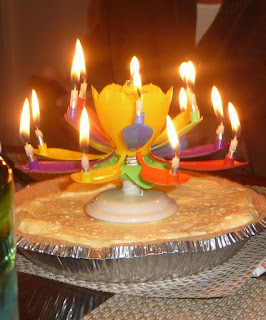 Surprise, not just one candle but a whole bunch and a candle that played Happy Birthday! 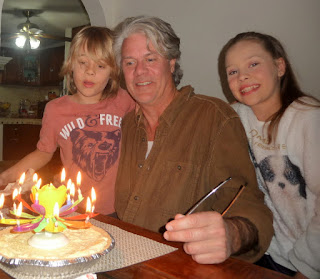 John, Sebastian and Matilda are waiting for the candle to stop! 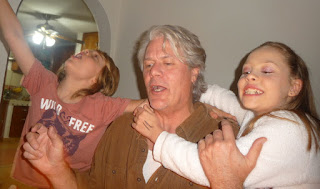 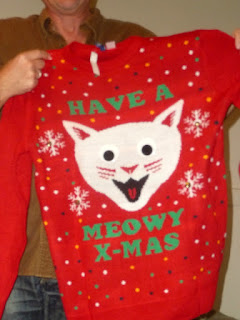 And, the gift from the kids to end all gifts, THIS Christmas Sweater. Isn't it grand?  It caused lots of laughs.  John put it on but "didn't want to get it dirty" so went back to his regular shirt, ha.


And, then on to the Grammy tradition that has been going on for 53 years!  Cookie Baking.  Who knew when I started this with my firstborn that I would be on the ninth and tenth person to bake cookies with?  Three of my children - Jennifer, John and Julie.  Then the seven grandchildren - Jessica, Hannah, Andrew, Emma, Christopher and last but not least, Matilda and Sebastian!  Amazing.

I remember when I was baking with three little children, mine, I would just cover the entire kitchen floor with a sheet to catch the dough, the flour, the sprinkles or whatever else fell.  It was so much fun.  Obviously the kids loved it because the tradition has continued.

Yesterday the "tradition" lasted for about 3 1/2 hours.  This Grammy had to take a siesta when all the fun and frivolity was over!    Here are the pictures. 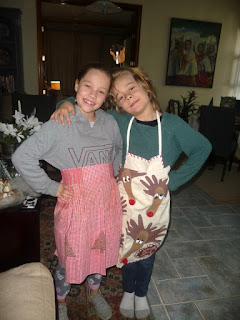 The red apron I have had longer then I can remember.  Fifty years?  The reindeer one was made by my daughter Julie, and it is the hand print of the five grandchildren who were in Texas at the time. They are all grown now! Treasure it........ 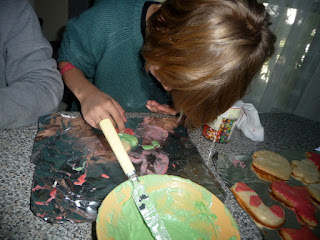 Hard at work decorating the cookies that they rolled out and baked. 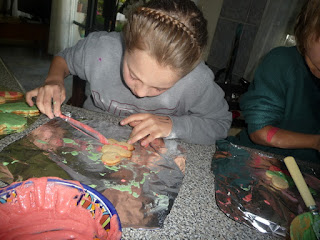 We had very little powdered sugar to make frosting, therefore we only had two colors to decorate the cookies.  But, oh my, once they used sprinkles and things on top, the cookies looked good enough to eat. 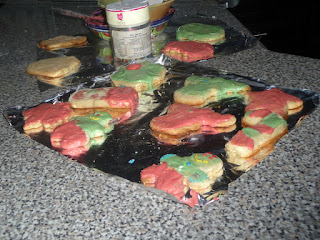 The first photo is Sebastian's cookies - he even made eyes with sprinkles! Very detailed. 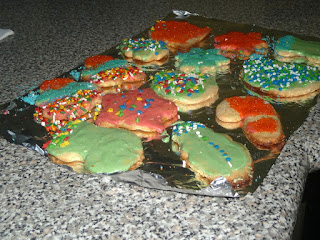 Matilda's idea was to make great use of as many sprinkles as possible.  Both of them made me chuckle.

What fun to hear them talking and singing and discussing their ideas and other things.

It IS these kinds of things that make life worth living. 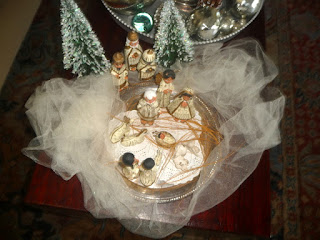 And, last but not least, Matilda had to rearrange the Nativity on the table.  If you notice, NOW the angel, all the animals and the little children along with Mary and Joseph are surrounding the baby to "keep it safe". Her words.  Previously the animals and the angel were in the netting.  Ahh, the things that can touch one's heart!

Precious, all! A belated Happy Birthday to John and Merry Christmas to you all!

Thanks Barbara and Feliz Navidad to you as well!

Made me wish that I was there. Christmas is so much fun being around the kids. I have 12 brothers and sisters and 23 nieces and nephews. When my dad dons his Santa cap to hand out the presents it is ((dare I say) wonderful.
Thanks Babs.

Merry Christmas Barbara, John, Matilda and Sebastian. Traditions are the glue of family. The kids have grown!

Crynoutloud! That is amazing. How fabulous to have such a big family! I bet it is a roaring good time when all of you get together. I'll think of you and your family on Christmas.
That reminds me of when I was a little girl in Chicago and when my Dad and his siblings plus mates plus kids got together, we had to set up tables in three rooms at my grandparents for all of us to eat. It was a blast!
I truly need to count how many nieces and nephews and greats I have in my family.
Nothing better then all getting together.........
Thanks for telling me about your family!

Merry Christmas to you and yours as well, Peter. I LOVE traditions. I had many growing up and I have tried to keep them in our family as well. Yes, the kids have grown quite a bit, especially in the last year. And, darn, they are so so smart.....

You are very fortunate to have such love in your family. Many of us don't.

Oh Contessa - I'm so sorry to hear that. My family has been
everything to me - always, but especially more so after my husband
died 40 years ago and the kids and I bonded to almost grow up together!

The traditions that I continue are because I know that when these kids
grow up they will be good memories for them and hopefully they will continue
them with their family.

I have a HUGE family, but it is spread out in Pennsylvania, Illinois, Florida,
Louisiana and Texas, just to name a few. I would be ecstatic to gather them
all together as we did in the past, many years ago.

Hugs to you and yours for a peaceful and tranquil holiday, wherever you are!

Oh, it does look like wonderful times, your son's birthday, and the cookie making tradition carried on. Your two adorable grandchildren have changed so much since the last time I saw photos of them. You see they as they grow, so it's gradual, but, we readers don't see them for long (too long - hint!) periods of time, and the change is noticeable - especially with Matti.
Wishing you more happy, happy days of Navidad y Ano Nuevo. Lena James

Hi Marilyn - Sorry I did not respond right away. It has been a "busy"
time of the year. Wishing you Happy New Year as well and please
continue keeping up with my shenanigans.........
Hopefully some day we will meet, here in SMA!

Happy Birthday John. U r exactly a few years younger than me.

I sure miss and think about you all often.

Will pass your message on to John. Are you still in Columbia? Hope all is well!