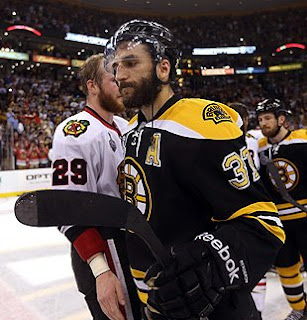 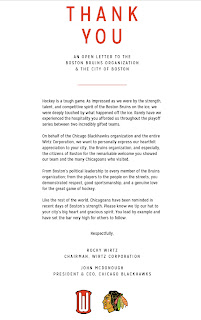 I
I have a confession..........during this season, I have become a diehard
hockey fan!  If anyone had ever told me that this would or could happen, I would have giggled.  I couldn't have imagined it.

I grew up loving high school football.  Then college football.  After all I was a student and then a wife of a student at LSU in Baton Rouge.
You couldn't survive without being a fan.

Other sports have never gotten to me.  Even though I went to the Indy 500, I never cared to go again.  Nor did it foster an interest for me.

As a neophyte I equate it to many other sports all rolled into one.  Bumper cars to be
comical.  Soccer and a little of basketball, but on the ground.  That's just my perspective.
If you're a diehard, long time hockey fan, I'm sure your eyes are rolling back into your head

At the end when the Chicago Bruins won, I was astounded to see the sportsmanship that
was displayed as each player shook the hand of the men they had just tried to trip up on the ice.

To cap it off is the letter displayed above starting out as THANK YOU.  I've never seen another

sport conduct themselves in this manner.  WHAT A CLASS ACT!

Now I have something else to add to my repertoire of interests.  Hope I live long enough to become more familiar with the rules and regulations of the game.  Not to mention the players.

Oh, and mentioning the players, Bergeron who is pictured above played the game with not only a broken rib but a hole in his lung that no one knew about until after the game.  Geez, these guys are tough as teflon.

If I had just learned to enjoy the sport when I lived in Houston, I could have gone to the Houston Aeros games.  Alas, the Aeros are moving to Des Moines, Iowa.  Doubt I'll ever be such a great fan as to make
a trip there.

Chicago however is my birth town.  Still have tons of relatives there!  Who knows.......a trip in the future?

Welcome to the clique. Hockey is one of the very few things I miss since leaving Canada.

Boston Bruins, Chicago Blackhawks ... Enjoyed the series, but wore my Carolina Hurricanes shirt! Got mini season pass up in the corner for this year. Son is big fan of the Canes... Real family environment at the home games...

Shannon - When NBC Detroit didn't carry a couple of the games, I watched it on the Halifax station!
Seems like there is a LOT of hockey in Canada!

Girlfriend, you can still surprise me!

Billie, as you do me! Ain't that great?

I don't know Babs - Hockey could be a slippery slope to wrestling - where we will not depart interests.

Sorry - we will NOT depart OTHER shared interests.

Not a fan of hockey or wrestling.

Calypso - how funny! I'll never be a wrestling or boxing fan.......BUT
when I was a little girl and stayed with my Grandmother in Chicago, she LOVED a wrestler named Gorgeous George and never missed listening to his fights on the radio. Otherwise she was a very prim and proper lady!

Good heavens to Betsy...who woulda thunk? The woman is off to new horizons again.

Kay, ya just never know with me!

BTW, there is an extremely interesting article in the New Yorker magazine, issue, June 24th, on Alzheimer's. Try to get a copy if you can. VERY informative.