Buying Toys in Mexico for Christmas 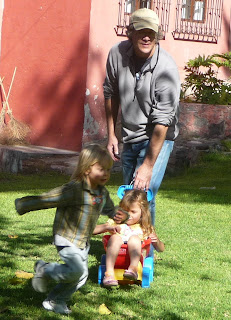 IF Toyr R Us ever moves into Mexico, their sales are going to be so high, even they won't believe it.
It is truly frustrating to find toys for Matilda and Sebastian for Christmas!

I've traveled to Celaya to the giant Wal-Mart and to Costco.  Very few things are less then $50US!  It's astonishing.  Then I came back to San Miguel and went to Bodega Aurrerea which is a low end Walmart, the grocery stores which carry toys, and even the farmacias.

As a last resort yesterday I went to Liverpool which is similar to a Dillard's or Nordstrom's but in Mexico.  The children's clothes are outrageously expensive.  Little outfits were all very close to $100 US, but, in the toy department, I found some toys for less cost then at Walmart.

I was pleasantly surprised.  Oh, and they gift wrap just as the stores in the USA used to do, without even asking them to do so!

Here's an example.  A child's tricycle here is anywhere from $100 US to $160 US.  I have bought many a bike in the USA for grandkids and kids - never spending that much money.  Of course, I always watched for specials, especially at Target.  No such thing here.

The above prices explain why, when at the border and I see caravans of Mexican Nationals coming home all year long, there is ALWAYS at least one bike tied on the roof or in the trailer or somewhere.

From my unscientific observation after going to at least ten stores, toys here are double the price of the USA.  Aaaaargh.

Yup! We buy toys for the less fortunate ninos in our areas - always get sticker shock in the process. 35 usd for a plastic Hulk doll toy - ridiculous!

We usually bring new toys from the U.S. - but did not get back there this year - so we bite the bullet and layout mucho pesos.

It is ridiculous. I guess it is all imported which would explain the high prices!

I had intended to buy everything when I was in Tx. Then, I didn't get to go....so, I'm scouring for deals!

Add to that, that Sebastian's birthday is in January and Matilda's is in February. Double trouble.....ha

Please, lets not leave out the quality and selection of toys.

Girls play with barbie and princesses.

None. Of if there are some, very little or extremely high priced.

I was one of those people that brought tons of toys and books down for our kiddos - and boy am I glad I did! Toys here just dont compare. Unless you want to teach your kiddos extreme seperation of genders.....

Mami - so true. I have found an artists easel and a couple of other things. I always bring books back from the USA so I have plenty of those but its hard to find some of the things my kids loved - Lincoln Logs, Tinker Toys etc.

I'm still looking and asking though....

We have often bought board games that the whole family can play. That keeps the cost down and gives the kids something interesting to play with. Since kids of all ages always play together in families here it works quite well.

Great idea Shannon for in a few years. Right now Sebastian only wants something that moves, he can bang or he can throw - a typical two year old little boy!

I'm still scouring for bargains and have found a couple more things......
Thanks.