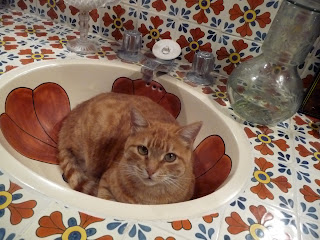 I so regret that all the years that the kids had cats, that I didn't take the time to watch their antics.

To tell the truth, I've always been a "dog" person.  Cats, it seemed, didn't have a personality.  Well, most of them.  We DID have one cat through the years, named FC for Fat Cat, who when it wanted to come in, would jump up, stick its claws in the wood door around the window frame and look in at us.

It was startling if you didn't expect it.  Hilarious if you did.

The latest is, in the middle of the night, if she wants to go out, she'll scratch at the curtains covering the doorway and windows to the outside.  I've laid awake in bed many times and tried to ignore this.
She has now figured out though, if she comes on MY side of the bed and throws her body against the closet door, that I give up and get up. It's amazing how loud that cat can be!  In addition, she has discovered that rumpling the small bedside rug, also makes enough noise to get me up..  Darn smart cat.

Oh, and if all the above doesn't work, she jumps up on the table beside my side of the bed and carefully walks across the ledge above my head that is a shelving unit/headboard.  Now do you see why I say that she dominates the household?  At  4 AM its not very funny, but when I think about it in the daytime, it makes me chuckle.

The other NEW thing is she has discovered that if she jumps in my lap in the morning while I'm sitting with my coffee cup and meditating, she'll get her back rubbed.  It has been four years that we have tolerated each other and last week was the first time she took the leap of faith.  Obviously she liked it because it has happened a couple more times since.

For someone who doesn't talk, but does purr and also kinda chirps when I let her in, I've sure learned by observation what SEEMS to make her life enjoyable and what doesn't.

But, with a cat one never really knows.

I was a "dog person" too until I moved here and began adopting cats. I was VERY surprised to find out that each one has it's own distinct personality and they are ANYTHING but boring. They are hilarious, annoying, fun, loving, gross, aloof, affectionate and many other adjectives. Who knew?