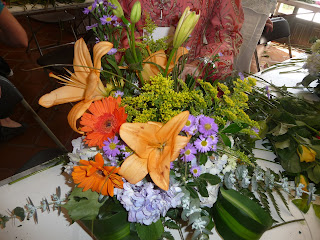 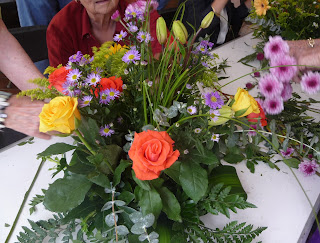 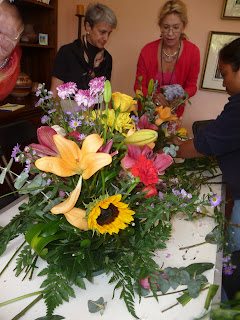 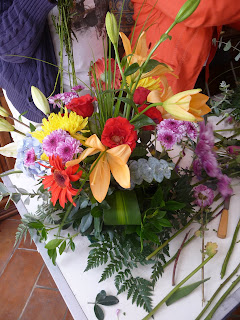 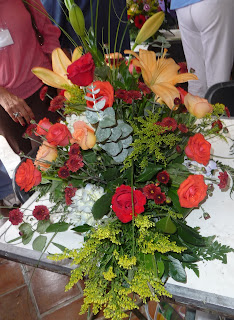 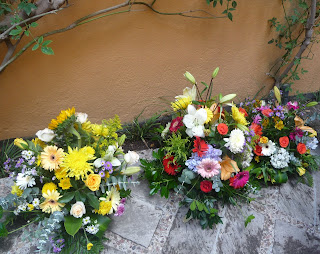 The program for the garden club this past Tuesday was flower arranging. It was demonstrated by Josefina who has a concession at the mercado. Josefina is a talented, creative floral designer. She showed us the "tricks of the trade".

It was chaotic with about forty women working on arrangements as Josefina guided us. Since it appeared that it was going to rain, the meeting was in one room that was a bit crowded.

What was truly remarkable to me was the fact that we all basically worked with the same kinds of flowers but the arrangements came out all totally different. Some were compact and organized. Others looked like a spring bouquet just picked from the garden. While others were light and airy.

Five lucky women who found a sticker on their chair after the arranging were able to take an arrangement home.

Interestingly, one of the women is from a tiny town in Illinois where I spent many summers as a teenager staying with my sister and brother-in-law. We laughed at all the different memories we both had of Polo, Illinois.

So often this "small world" experience happens in San Miguel. But it still always surprises me.

It was a fun day with a group of delightful women. Life is good.

Beautiful flowers, you can come arrange our wildflowers anytime, now that you know the tricks.....

Thanks Tancho. I'm going to hold you to that offer. Hope to be over in your "neck of the woods" in the next few months.......

Oh what fun! Flowers are sooo affordable in Mexico and I plan to keep fresh flowers in the house at all times down there.

You gals did real good!
ml