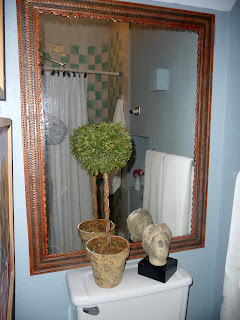 The idea for this post came to me yesterday while having lunch at the new "hoity toity" hotel, Rosewood. After brunch with ten lovely women and on my way to leave the hotel, I decided to stop and use the "facilities". I noticed that the commode was an automatic flush. Everything in the style, finish selections and appointments of the restrooms were beautifully detailed.

As I walked to my car I sort of chuckled to myself remembering one place after the other I have stopped over the years while traveling the backroads of Mexico. There could be NO comparison to Rosewood's banos.

One of the first phrases I learned back in the 70's was "Donde esta el bano?" That was when I was travelling back and forth to Mexico City. I was thrilled at my mastery. Well, until someone answered me. Truly the very first time someone answered me, he had a very large gun. Here is the scenario. I managed a US State Dept contract in Mexico City for drug interdiction. We were teaching Mexican nationals with American A&P mechanics how to maintain the Atty General's fleet of aircraft for spraying paraquat in the fields of Michoacan and other states - the year, 1974. I was walking from one airplane hangar at the airport to another, and as I came around the corner of a building, there in full flak jacket and uniform was a soldier. All I could think to say was, "Donde esta el bano?" He lowered his gun and answered me. Very politely. I attempted to look as though I knew what he said. No way, and I do not have a poker face. I wonder what he thought.

Later that day in my hotel room I realized that I needed a cram course back in the USA on Spanish. If I told you how many times I've taken Spanish, you would just shake your head in disbelief. I'm too mortified to tell you. Of course now I can get my point across and do and get to where I need to go. But, fluent not even now, as much as I've tried.

Other bano scenarios also come to mind. Back in the olden days, at least to me, when I first started driving down here in the 80's, Pemex stations were NOT plentiful. One of the great pieces of advice were, "Never let your gas tank go below a half tank". Even nowadays with PEMEX stations more plentiful then potholes, I still keep a half tank.

But back in those days there definitely weren't PEMEX stations with clean restrooms, just barely restrooms. However beggars couldn't be choosers and one used whatever was available.

It was THOSE times when there was nothing that the adventures occured. One of my funniest experiences was heading toward Guadalajara. I was in the area near San Luis Potosi - nothing in sight - nothing. Then I spied a little concrete block house. I swooped in and stopped the car in front. Knocked on the door and asked for their bano. The girl who was there very politely walked me through that room, out the side door to the outhouse which faced HWY 57. What's a girl to do? I laughed.

There is a restaurant here in San Miguel that started out in a parking lot with a tarp for a roof. They had to have a bano........and they did, but the door was a serape. It was basic. We girls learned to stretch our leg out so our shoe showed, so the guys wouldn't flip the serape and catch us in there. That restaurant now is in a brick and mortar location. Somehow it just doesn't have the same ambiance........although it does still have darn good barbeque.........

So, those are just a few of my banos stories - hope they have given you a chuckle today. They've caused me to smile as I have written them. I saved some of the more unsavory ones from the blog - after all, this IS a family oriented site.

Tell em about those manzanas.

Great stories. You will need to share some more when I return. Probably on Sunday now.

I've never had to sit in a bad Mexican john, one of the advantages of being male. I have stood, however, in some incredibly basic ones. It's fun. Women have a larger problem.

Once in a john in a border town, I was letting it fly into one of the urinals, not a toilet. I heard a sound at the far end of the bathroom. I visually followed the pipe at the bottom of the urinal I was hosing. The pipe traveled to the floor on the far side of the room, and that's where it was depositing my pee. Right on the floor, but not on my feet.

Vandy I've already told THAT story once.....how's the weather in Galveston?
Steve, see you when I see you!
Felipe - ewwwww, yuk.

I have been here since 2001 and I have so many bano and no bano stories. Now it's paradise here in the bano department. I can remember a hole in the floor at Playa del Carmen....

Jan, yes that was one of my unsavory ones - a hole in the floor, a cloth across the opening to the highway at somewhere near 9,000 ft somewhere before you get to Ciudad Victoria on a curvy winding road. Oy vey!

Ned use to rate Mexican bathrooms on a scale of 1-10. He said he was going to write a book, "Whizzing your way through Mexico."

His all time best bano was one in a hotel in PV. It was on the side of a cliff by the water. A big open window let the guys look out over the water while they were taking a whiz.

Billie, there must be something about cliffs! If I happen to be looking out my windows toward the canyon and I see a man walk up to the edge of the cliff, I automatically back away from the window cause I know what is going to happen next. Ewwwww!