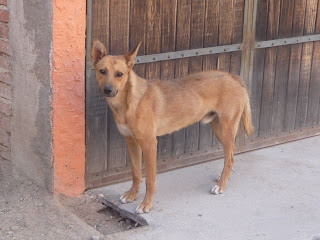 I have avoided the "newcomer" to our street for almost a month now. I figured he would leave, be a pest, get run over, since he chases any motorscooter that goes by, or all of the above. That has not turned out to be the case.

At first he just slept or laid next to one of the three houses down here near the corner. Then I noticed that my Mexican next door neighbors were putting out water and food for the dog. Hmmmm, I thought. the children from both houses have gone out on the street to play with him. He is a VERY well behaved dog.

He was skin and bones at first. Now as you can see he is filling out. The other day the kids were bathing him with a hose. He LOVED it and jumped around chomping at the water. He was so happy.

He loves to chase the motor scooter drivers who go by. I fear for that. But he is smart. At night I hear him bark once in a while. I think, "My car has never been safer on the street".

When I come home in the car and he's a couple houses down, he trots over - never jumps up - just stands and watches me and then goes over and sits down. I swear he is one of the smartest, most well behaved dogs I've ever seen.
I swore when my dog Flash died that that was that and after sixteen years with Flash, I was not going through that pain again of losing a dog. No, I haven't fed him. No, I haven't petted him. No, I haven't invited him in. But, somehow taking his photo and NOW talking TO him is the beginning of a slippery slope for me, I'm afraid.

WHAT will "Velcro the Cat" think?

Babs, treat him like you do the neighborhood kids, love on them, but don't assume any responsibility. Easier on the heart!

“Dogs are our link to paradise.”
—Milan Kundera

He's a handsome fella. Our dog, Saby, landed on our doorstep 5 years ago. It was our house or the pound, so we said we'd keep her until the owner got back on his feet. She's 13 or 14 now and starting to hobble. I can see heartbreak approaching. Ugh.

Not even a pet on the head? You have strong conviction, I would have folded long time ago.

"No act of kindness, no matter how small, is ever wasted."

-Aesop, The Lion and the Mouse


Follow your heart. Solo Vivo will appreciate anything you choose to do to help him.

Judy, you're so right - I bring gifts for the kids and talk to them all the time without the responsibility.
Great quote Rick!
Saby is a lucky dog. My dog Flash that I had for 16 years (longer then most men) was a "freeway" dog. Picked up off the freeway and given to me.......I have guarded my heart for the last seven years. Guess that's why I haven't invited Solo Vivo into my garden. Heartbreak is inevitable I guess.
Tancho, I've almost folded several times........he has such sweet eyes and such a playful attitude.
Stanley, so, so true.