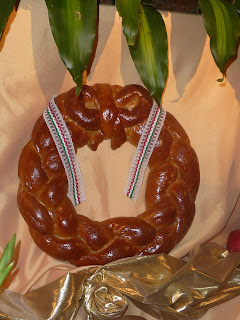 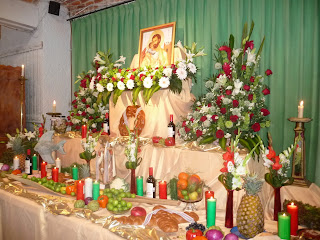 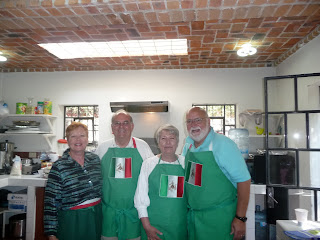 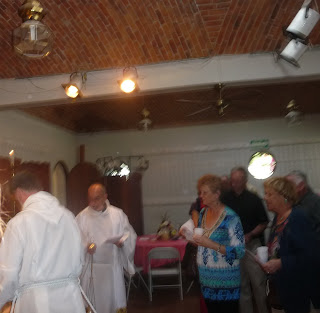 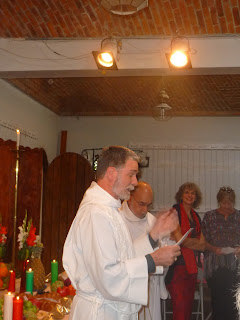 Typically in the past, the Feast of St. Joseph has been a celebration in our colonia because the name of the main road up the hill is "Cuesta de San Jose". A statue of Joseph comes up the hill on a bier with about six or eight men carrying him. He is carried to the tiny church that clings to the side of the hill. It is a simple ceremony but has grown in recent years to include fireworks (of course) and now drummers and dancers during the night.

However yesterday I went to another Feast of St Joseph. What a festival! It was prepared and provided by Americans of Sicilian descent. Some from New Orleans and Louisiana previously. Most people don't know that Louisiana has LOTS of Italians.

It was obvious that they had worked long and hard to prepare delicious food. Lasagna, pasta, breads, cookies. My goodness what a lovely feast for about eighty people. I was thrilled to be included. The altar with all of its symbolic items reminded me very much of the Day of the Dead altars and their symbolism. The altar was blessed by the pastor of the Episcopal church here in San Miguel with incense and holy water.

In addition the group had prepared fliers explaining the history of the Saint Joseph Altar, and of the Festival. It was very meaningful. The bag of cookies included a fava bean. It seems that when the droughts occured in Italy, the only thing they had to eat was the fava bean. Now it is said that it is a lucky bean. Some believe that if you keep fava beans in your pantry that it will never be bare.

St. Joseph has always been important in my life. My dad's name was Joseph and even as a little girl I remember the Polish celebrations at our Catholic church among others. That was in Chicago. I don't remember any celebrations after we moved to Lousiana. We lived in the northern part of the state at first where most people were Baptists - hence not many festivities.

Imagine my surprise when moving to Mexico to see the festivities in honor of Joseph - the patron of those in need. It seems appropriate.

I raise my hands in applause to those who keep these traditions alive for all of us to learn from and experience.
Thanks to my friends - Darlene and Tony, Bruce and Mary for including me in yesterday's celebration.

Babs - I would have thought that the fireworks and bells from "San Jose de montana" over on the Cuesta would have given you plenty to keep you up all hours! I was staying in a house just below the church when it was consecrated! I'm not a handsome dude, so it was NOT hard to become Quasimodo (da bells! da bells!)for a fortnight! I've never stayed near a church in SMA since! Great photo's!
Dan in NC