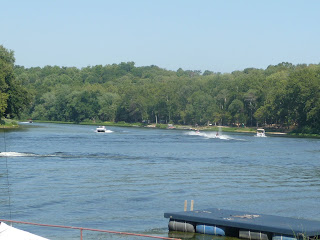 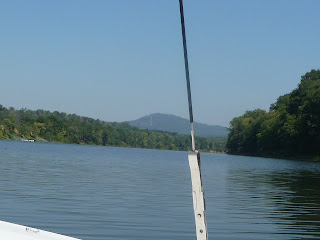 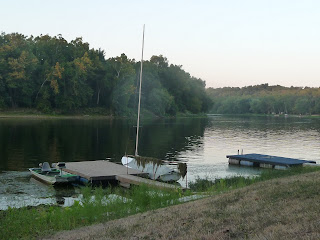 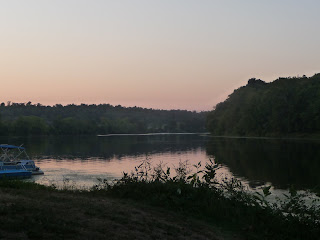 I'm not accustomed to sailing where there aren't waves and whitecaps. It was a strange experience. Not in a bad way, just different. Mostly it is pontoon boats and speed boats with water skiers trailing behind..........on the Potomac River.

We chose to sail one morning hoping there would be enough wind. Unfortunately not - but it was interesting to see the shore line from the middle of the river. One side of the Potomac is a preserved area with the C&O Canal nearby. So, while sailing the beauty of the woods is on one side and river residences on the other.

We were disappointed not to sail up and around the bend. I haven't been that far north yet. Hopefully the next time we go to the river house IF there isn't enough wind, we'll canoe north. It's been years since I've canoed. Decades.

In fact the last time I canoed it was in alligator infested waters, literally. I don't know who was more concerned, my son or I. Those "guys" sure can slip into the water fast and with a big swoosh. I NEARLY jumped out of the canoe. In the interest of self-preservation, I didn't.

The Potomac is very calm and beautiful in this area. As we sat one evening watching the sunset, a seaplane came around the curve and landed! I was soooooooo shocked. Who would ever expect that? I think the pilot was practicing touchdowns because he took off again after about 5 minutes. Nice sight.

We saw egrets and the ever present Canadian geese in the evenings. No deer. Oh and rumor has it that a groundhog lives in the shed on the property. I've never seen a groundhog in person. But, I decided to leave well enough alone after I saw the holes it had chewed in the walls of the shed. Big teeth, I presume.

It has been interesting each time that I have been up here in the Northeast to see the difference in the terrain, the lifestyles, and so many other things. Previously when I was in this area it was almost always in DC on business. I'm hoping to go there by train next week with Paul to be a tourist and see all the monuments that I never had time to see while there in the past.

Life is an adventure!

Lucky you, I know you will pause and consider the history of the river and what happened in the area 200 years 300+ years ago. It always chokes me up when I finally get to visit historical areas of the country. Enjoy your tourist time!

I have sailed on both oceans and lakes - Lakes are harder - The wind conditions are less predictable. No wind at all is of course NO FUN!

Linda Lou and Senor, Too said...

lovely photos, it is a beautiful place. LL

Oh touring in D.C. How fun! I love being a tourist there...haven't been since son was at Georgetown U but do want to get back. Take lots of pictures. I'm with Tancho...get all choked up with the history that has been made and is being made today. Have fun...so happy for you in this time in your life.