Getting Through the Day 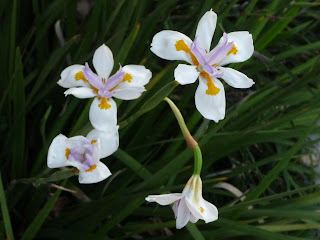 We ALL have days, hopefully very few days, that we just want to get through them. We dread that day. We sometimes procrastinate about that day (like scheduling a Dr's appointment) or something equally nerve wracking.

I had a day like that yesterday. I knew it was going to be difficult, so, I've learned in the past to not schedule anything and to "go with the flow".

It was the sixth anniversary of my daughter Jennifer's death. Last year I flew to Colorado and spent it with my son, the Gypsy Kid and the Gypsy Kid's family. It was lovely. But, for some reason this year, I was in suspended animation about what to do and so I did nothing.

It turned out to be the right thing. I just kind of lolled in the garden and reflected. Cut her favorite flowers - the ones in the above photo which are so prolific here and put them in a vase. And, I was not emotional. I just have good memories.

The day before my son-in-law had sent photos of Christopher, Jennifer's son. Oh my has he grown! No more little boy, but a boy entering that next stage. He'll be twelve in September. One of the photos was of him with a science project at school. Sweet. The photos helped immensely. He looks so much like his Mom. A true gift.

So I got through it. And, I'm sure if you have days like that, that you get through them to. Heck, what's the alternative?

It's a beautiful day today.

Babs, I'm so sorry for your loss. From what I've been told, the death of a child is the hardest loss to overcome. I'm glad you got through the day. I have one of those days coming up at the end of this month. And I too will just go with the flow because there really is no other option. Lovely flowers!

God, has it been that long! Hard to believe. Beautiful flowers...Jennifer would love your garden and the butterflies.

I think one reason we are reluctant to let go of grieving is that perhaps it makes us feel a little guilty, to be moving on and leaving behind that person we loved. Wherever she is, she probably smiled at you in your garden, daydreaming and picking flowers.

I love your introduction...