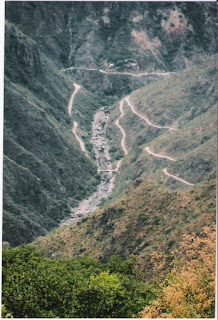 Traveling on "roads less traveled" has always been a passion of mine.  The above photo was the "road", I use that term loosely, from Creel to Batopilas.  It was a six hour trip to go ninety miles.

Believe me, midway through it was apparent to me that I should have believed all that I had read in the past about the danger and length of this trip.  Add to that, once one reached Batopilas, the thought struck that one had to go back up that road!

Imagine, though if you started out in a yellow 1971 Volkswagen Beetle convertible?  From Anchorage to Argentina!  That was the beginning of a series that I just finished watching on Netflix called "The Kindness Diaries". 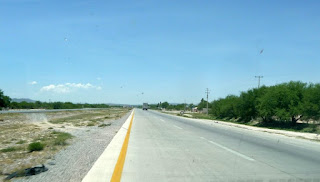 Leon Logothetis drove through snowstorms, thunder and rain, freezing cold weather and sometimes pleasant weather without a penny in his pocket and survived on the kindness of strangers.  That means he had no money for gas or food or lodging.  The segments are absolutely spellbinding but more then that, they are tender and overwhelming to see the outpouring of kindness from strangers such as a wrecker driver, many people offering meals and a place to spend the night.  Not only in the USA, but in all the countries that he traversed!

His 1971 VW Beetle plays a big part in the trip as it breaks down or runs out of gas or swerves into snowdrifts.  His inability to speak Spanish once he arrives in Costa Rica and all points south is also hilarious and touching.

But, more then anything, it is the interaction of Leon with all these people from all over the world that literally touches your heart as you watch each and every segment.  Some are world travelers traveling on a dime. Others are refugees fleeing the conflict in Venezuela and ending up in Peru.  It goes on and on.  Each segment is a treasure in and of itself.

I watched two seasons of approximately twelve segments in two nights.  It is spellbinding and a beautiful commentary on how, when you ask or expect the best from people, seldom are people disappointed. 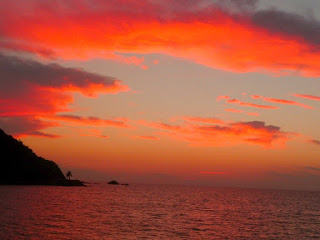 Leon is a former stockbroker from London who gave it all up to travel the world.  In reading additional information on his website, Leon Logothethis.com, I discovered he had a series for National Geographic as well called "Amazing Adventures of a Nobody".  Of course I am going to try to find this series if possible.

As I went to sleep last night, I thought about all his acts of kindness that changed the lives of unsuspecting people he met who had initially befriended him.  Heartwarming is all I can say.

At this time in our World when so many people turn their backs on those who have less then them, it was refreshing and thought provoking to watch "The Kindness Diaries".

If I never see anything else on Netflix, these two nights were worth every penny for the monthly service.  Truly. Hope you take time to watch it and let me know what you thought or how it impacted you.

I remember that trek down from (to?) Creel. Can't remember, though, if it was boring, spectacular or dangerous. But I do remember the town at the bottom being beautiful and friendly, despite rumors about marijuana growers and all that. Will try to catch the series on Netflix. Sounds fascinating and a good antidote for all the negative news nowadays.

Thanks for sharing this story ... I love it! The only hesitation I have is ... why are all of these stories (or almost all) about guys. Not that bad things don't happen to guys ... but I can't even imagine a woman doing that. Maybe that's just my own fear. Anyway, I love the story and the reliance on strangers. One question about how they made the series ... wouldn't he have to be traveling with a crew? I'm off to find out more.

Al, that road was all of the above. Especially dangerous when we met a bus coming up from the canyon bottom and we had to literally have part of the car hanging over the side of the cliff! (I got out of the car since I was not driving). Batopilas was amazing and the locals I met were fascinating since some were Tarahumaras.
I hope you enjoy the series.

Joyce, I find it interesting that you would find a negative in the series because it is a man doing it. He is a philanthropist who probably funded the whole thing until it was sold to Netflix. And yes, he did have a film crew as well.

I watched another moving about two young Germans who rehabbed a school bus in NC and then headed for Canada, Alaska and there ultimate goal was Argentina but made it as far as Cancun and flew home with their dog. They did their own filming and it was a movie, not a series. Fascinating.

I've known and met many women traveling alone all over the world. One being me. But to have the funds to put a series together is a whole other issue.

Thanks for commenting. Where did you end up after leaving Mexico?