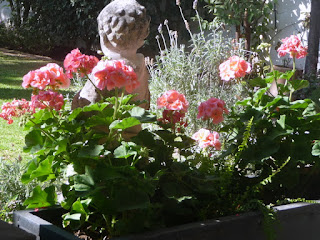 Not only hail, but deluges of rain, mud and signs floating by down the streets!  It all happened Sunday night/early Monday morning while I blissfully slept through the whole thing.

Imagine my surprise when I picked up my phone about 9:15AM and had a Private Message on FBook from a friend wanting to know if I had any damage!  Damage from what, I asked?  The hail and storm............Nope, nada.

So, I got up, went out on the front porch, looked in all directions and all I could see was that the serpentine walkway from the gate to the house was wet.  Not a bloom was blown off the flamboyant tree and no lemons or peaches from their trees were on the ground.  Nope, nada.

Came back in and answered my friend that obviously we had not had the same storm although we are only ten minutes apart from our respective homes, depending on traffic.

Then, AFTER I had my first cup of coffee, I looked at Facebook and all the posts and videos.  Absolutely amazing.  Destroyed gardens and rooftop terraces, fallen roofs, caved in streets and piles of ice that was formerly hail, had hardened into what looked like snow.  Nothing like anything I had
ever seen.

Later, about 11:30AM, Josefina and I moseyed up the libramento (the ring road around town) to the mall as I had an appointment for a mani/pedi.  Since my fall about 10 weeks ago when the grocery cart ended up on top of me, I do not go long walking distances without an arm to hold onto.   Hence, Josefina was with me.

It was a darn good thing.  As we approached the mall, on the hillside, it was covered with white stuff.
Then as we attempted to walk on the sidewalk into the interior of the outdoor mall, there were buckets, danger tape and all kinds of markers showing where to and not to walk due to piles of slush, ice and water.  What a mess!  And dangerous.  A quick way for a cane to slip and then, well you know........me to go with it.

When we arrived at the nail salon, it was more of "I can't believe my eyes".  The interior had men everywhere trying to repair the sagging roof.  All the comfy, nice furniture was outside and everything in the main room was covered with huge sheets of plastic.  Luckily, their two ancillary rooms were not damaged and that is where people went for manicures and pedicures.

As I sat looking out the big plate glass windows, there was a pile of ice near the consulate office, that, of course, every little boy had to dip into in an attempt to make an ice ball.  One little boy would gather a hand full, throw it up in the air and then run under it.  Grinning from ear to ear.  Delightful.
Not one little girl touched that icy, cold stuff.

As I left the mall at 2:30, I was astounded to see banks of white "stuff" still frozen in the parking lot near Soriana.  Piled on top of this white bank of ice were kids and adults galore trying to have an ice ball fight.  Hilarious.

Later, after returning home, I saw photos and videos from Mexico City of the city, in some parts, covered with about five feet of the same white stuff!  Guadalajara had similar photos.

Truly, even though I grew up in Chicago and have seen snow as high as the top of a doorway, I have never seen a hail storm of such a magnitude.  And, all of this occurred on July 1st!

Alejandro did not mention any accumulation of hail in Mexico City, but I saw the incredible photos of the hail in Guadalajara. Meanwhile Fairbanks, Alaska, reached a record high of 90 degrees, and Europe is sweltering. The weather is crazy all over. And some people still deny climate change.

We had a little hail at our casa in upper San Rafael. Some leaves and flower buds knocked out of trees. Down the hill near the San Juan de Dios church and mercado there were some trees down and damaged buildings. I think a lot of the reported accumulations may be exaggerated due to drifts but there was clearly a LOT of accumulation in some places.

Anonymous said...
This comment has been removed by a blog administrator.
4:51 AM

Bill, if this isn't climate change, I don't know what it is.


Glenn, I think the storm must have really hit hard up near Balcones
and near the Mall. The video of Canal st. was unbelievable with the
rushing water. I have been caught in those dowmpours in the past.
Best place to be in a storm like that is at home! Glad ya'll didn't
have any flooding or serious damage.

We didn't get anything out our way, but Stew some pictures of kids playing on piles of snow by Soriana. He also said that the roof had caved in on some of the storefronts in the mall. Yesterday the electricity was off at the other end of the shopping mall, over by Liverpool. Let me see if I can upload one of Stew's pictures to this comment. If not, I'll send it to you by e-mail.

Thanks for this post. I had no idea that SMA had been affected. Truly the world is definitely in the midst of climate change.

Please continue to be careful as you walk.

Al, glad you had no damage. Did you also know that Monday night at 9PM there was an explosion at the mall in the mid section? I have NO details, only saw the photo posted by San MIguel Herald, I think......sheesh.

I need to use the ATM up at Santander, which was not working on Monday but I think I'll steer clear of there for a few days!

Contessa thanks for commenting. Believe me, I am walking like a slug these days. Very slow and carefully. It has been about 10 weeks since that bad fall and I think of it every time I am on cobblestones or uneven surfaces! I'm also no longer wearing sandles, but just plain flats as they seem to help as well. Life is certainly always about changes! I hate shoes so this is a big compromise for me!

Anonymous said...
This comment has been removed by a blog administrator.
4:43 AM