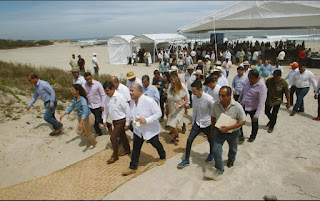 The announcement was made in Mexico News Daily, an online newspaper, yesterday of the development of all the areas that have never been developed in this area.

I thought the whole article would come up, but alas, only the photo.  I suggest you go to Mexico News Daily, an online English language newspaper to see the amazing amount of development plus the widening of the road from Melaque to PV!

Having driven that road more times then I can remember, on winding steep cliffsides, I wonder how they are going to take a windy two lane and turn it into a four lane.

The announcement said that there will be an immediate beginning to buy the land necessary for this change to Hwy 200.  It is a good thing that they said 30 year development.

I knew three years ago that something was afoot.  Four Seasons had quietly begun construction on a hotel north of Cuestacomate and also there was scuttlebutt that a regional airiport would be located midway between PV and Manz.  That was not mentioned in this article.

Ahh, for at least the last ten years, if not longer, I have scoured, visited, lazed and enjoyed the many barely occupied beaches of this area.  From Cuestacomate north there were many that you could walk and not see another person.  Tecuan comes to mind.

Two years ago, even though there were guards and a gate, I finagled my way in because I still was driving my trusty Pathfinder with the Texas license plates.  I told the guard I had driven all the way from Texas to go there and, he relented and let me in.........Well, I DID drive from Texas, at some point.  I wrote about it on the blog and you can see and read about it by going to the search box on the blog and typing in Tecuan.  The reason there was a gate was it is private land and there was heavy equipment in there, so I assume someone was developing it.  I was thrilled to spend at least an hour in there just gasping at the beauty and the expanse along with the horizons.  My kind of place!  If you read the post you will see it was not as easy to get out of there as it was to get in.  It is funny now but a bit scary back then!

Then there is Tenacatita where many a day was spent in the water and in a chaise lounge with a pina colada, a good book and Flash, my dog, with me.  Ahh, those were the days.  Then some guy from Guadalajara "took possession" of the land, the hotels, the houses, etc and closed it off with fencing and cleared the land of the buildings!  Yes, expats and others owned the hotels and houses.  It went to court and took, at least six or seven years to get a ruling against him!  By then, I guess those landowners had left.  I stopped by there two years ago and it was a sad, sad sight.

All the restaurants and businesses had moved down the road to La Manzanilla which is in a sweet little bay and has much rental property along with a few good restaurants.  Another place to start
my routine back with a pina colada, a chaise, but by this time, no Flash.  Flash died in 2004.

For many, many, many years, I have gone and stayed up on a cliff side looking out at the Pacific along with the Bay of Cuestacomate.  It is the closest place to heaven that I have ever stayed.
Watching for whales breaching daily, (you get where you can recognize a slight swell in the water before you even see the whale), the oyster diver without an oxygen mask, and best of all the fishermen in the mornings pulling in their hauls and at night laying their nets.  I have never tired of it.  I would go for a month and end up staying two months because of the gracious hospitality of my dear friend John Horton who I have known for almost 45 years.  He build a lovely hacienda with two wings so I had mine and he had his with a huge palapa in the middle for enjoying all good things of life.

I guess this post is an ode to this wonderful place NOW.  It is not glamorous, unless you love nature and Mexico.  If you want fancy, you to go PV or Manz, but inbetween is just a gentle, tranquil place to sink yourself into nature and into the people of Mexico!

With the lists that I have read of what hotels and groups are going in, that will all change.  Doubtful it will be finished in my lifetime.  The days of a bungalow on the beach for less then $1000USD will be a thing of the past as will a little palapa covered lean-to on Yelapa that I used to stay in for $15USD a night.  That one is long gone.........

I'm GRATEFUL that I got to experience all of it for so long...........I'll try to post some photos of the area, manana.  Or, if you don't want to wait, I usually posted photos in January/February each year on the blog under the names of Melaque, Barra de Navidad, Cuestacomate, Tenacatita and Tecuan, just to name a few.

I can certainly visualize you with a Pina Colada on the beach. Come to think of it, we've done that a few times ourselves!
Oh, the beach.........
Roberto

Indeed Robert. What is the beach without a pina colada?

This is basically old news. Developers have had big plans for development of the Chamela area for a number years including a new international airport but were held back by lawsuits from environmentalists. The highway has already been straightened in some spots and widened from El Tuito to Chamela.

El Tecuan is still just like you last saw it. No new anything being built yet. The Four Seasons at El Tamarindo is quite a bit along and supposedly construction of a fancy new boutique hotel at the site of the old Club Med close to Careyes is going on.

It will be interesting to see what happens to the old haunts.
With 3000 five star hotels, it will not be "my kind of place"
anymore, sadly.......

Unless I can possibly go back to the cliff overlooking the ocean
at my friend's house. We'll see

I think you misread the article. The headline says 3000 rooms. Not 3000 hotels, heaven forbid!

Clete, thanks for catching my mistake. Yes, 3000 rooms not hotels.
OMG that would really be too much.

Babs, you're a pioneer expat and lucky to have had the lifestyle and chutzpah to live it. It's nice to read about your memories of the Mexico few of us will ever see. Keep sharing please.

Ahh, Peter, every day I realize how lucky I was to come when I did in the 70's! I hate to see the changes, but, remind myself there are still hidden gems to be discovered in this vast, beautiful country. I know of a few I have not been to yet. Maybe some day.
In fact I remembered yesterday that I have photos, somewhere, of Puerto Vallarta in the 70's. Oh my, it was definitely Shangri La with no tall buildings, condos or anything like that........Truly spectacular. I'll try to find them soon.

With a little luck, it will be some years before your idyllic getaway spot becomes an overdeveloped beach resort.

I think it will take many years to realize much of what's planned.

It is a large area and 3000 rooms in todays 'all inclusive' large hotels could only mean about 6 hotels if the 500 room variety.

I'll forward the article to you and you can see all the H signs which indicate hotels. It is a LOT! Of course there are some already in existence, but usually the majority have 20-50 rooms except, for example, the big Wyndham at the marina in Barra de Navidad........Hopefully they are not putting up MEGA hotels to destroy the horizon and the environment.....ahh, well, by the time they finish, I will be just a memory!

Bill, you are probably correct although some have already been under construction for the last 2 or 3 years in advance of this announcement by the governor of Jalisco.

Hola Babs,
I was lucky to stay at Maguey casa In January at the end of the beach by the sunset cafe in La Manz. I love the fresh fish the most. So different and delicious when it is right there fresh.

Oh so true, crynoutloud. Fresh fish caught that day or within a few hours is totally different then anything in a restaurant.
In fact, when I stayed with my friend on the cliff, he would kayak out and buy still alive fish from the fishermen, then bring them in and he would grill them that day.
Oh my, it makes me want to get in the car and head West!

Thanks for the story and reminder...La Manz is a nice little off the beaten track place to stay!...There is a place on the highway as you enter Melaque where you can buy fresh shrimp. I always have a cooler and buy 2 kilos to bring back to land locked SMA! I eat them as though they are gold and serve them at parties. And, to think, I grew up close to the Gulf where we thought nothing of fresh fish and shrimp, back in the day