So many fun things happen when watching or just enjoying Mother Nature.

This past week was no exception.  A busy week, but it still left time to contemplate things going on through the open door.

The hummingbirds have been whizzing with purpose.  The other day I discovered why and where they had been zooming to by the front door. 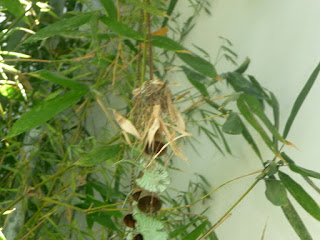 Of all the places to build a teeny tiny nest, they built it on the top of the wind chime!  Amazing. 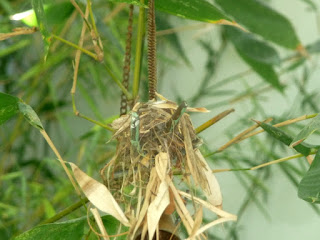 After watching them from time to time gathering dried bamboo leaves, stuffing from the wall baskets and grass, here is the finished product. 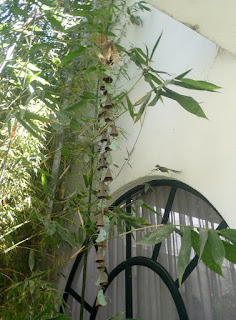 When the wind blows this chime really swings.  I so hope the nest is secure up there.  I'm afraid to get too close to it for fear there is an egg in it.  But, when the season is over, I'll attempt to get a shot from above it and the intricacy of their construction of their new home.

On Saturday morning about 10AM the doorbell rang.  Unless I know someone is coming, I ignore them as it usually never anyone I know.  But, this time the door also opened and it was the landlord and his brother!  They had come to trim the palm tree.  He had been saying for five months that they were going to come and voila!  here they were.  What a nice surprise.

They had a huge ladder but just a little, itty, bitty saw that in no way was going to cut those huge palms.  I did not say anything and they came to the same conclusion so left to get a bigger saw..........

Upon return, the younger brother went up the ladder and for the next three hours sawed and sawed and sawed.  Trimming those palm fronds was quite an ordeal.  I only looked out from time to time because of my fear that Luis would fall off the ladder as he climbed higher and higher. 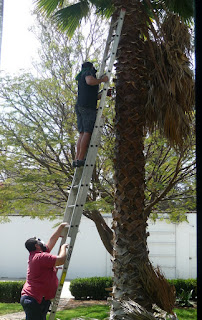 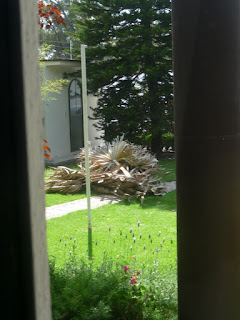 But, they had it under control and rested a bit when I took water and lemons out for them to drink and refresh themselves. 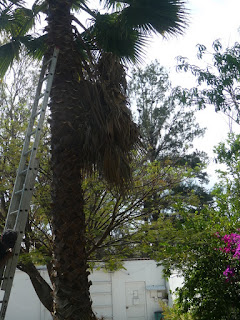 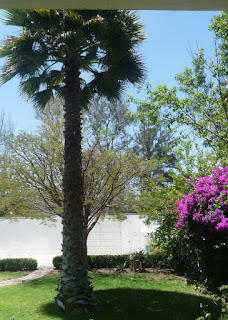 The difference now that the fronds are gone is amazing.  I now have more sky to see, at least six to eight feet more!  It also gives more of a view of the magnificent tree behind the palm.

However, I have not seen the red headed woodpecker now that the fronds are gone and some of the other birds who liked to hide under the fronds.  Hopefully they will return.  I heard the woodpecker just yesterday but he was about a block away!

It IS the little things that count!  Hummingbird nests, sky, views and sunsets.  Ahh, yes.

If I had known that you had no hummer nests, I had a whole bunch of nests when I moved and I gave them away! They are made very neatly. I had many other nests as well that I had brought from Texas.

You'll find them. Must be around you where you least expect them. Good luck.

I love nature and if you take the time to look there is always something special to see. How wonderful to have your garden view opened up.

Contessa, I find rejuvenation in nature and wildlife. Don't know how I could
survive in a city with concrete and tall buildings......WE are blessed, for sure.