While I was in Texas this spring, it came to my attention that the friends who were in both houses were having difficulties not only with the taxis finding the house, but, also, with Bajiogo Shuttle
who has been to this house more times then I can count over the years.

What the heck was going on?  It was a mystery.

On the street maps, the street is clearly identified as Cuitlahuac.  Never, in the past was this a problem.  The above map is from the Que Pasa section of our weekly newspaper, Atencion.
The square box up in the corner of Cuitlahuac and Cuahtemoc is the property.

The mystery was solved this week while my car was in the shop due to a fender bender, literally.

Calling taxis became quite a frustrating exercise.  They could not find the street and were wandering around Col. Azteca on four different occasions.

Even with specific directions to the dispatcher, nothing was working.  Then voila, the mystery was
solved.  Now all the taxis AND Bajo Go AND the Executivo taxis are now using their GPS system which relies on Google Maps!

It turns out Google Maps has misidentified my street as Cuahtemoc.  Cuahtemoc is the street to the side of my house which is not open going down the hill because the street is being recobbled.
What a mess!  IF the street had been opened, whoever lives at Cuahtemoc with my number would have had four different taxis showing up there........


Now the question is, "How the heck do you get in touch with Google Maps to get them to correct this error?"  I tried, but could not find a way to contact them.

Right now I'm just staying home rather then go through the aggravation of trying to get a taxi up here.  See, life just loves throwing little and sometimes big challenges in one's path.  Surely there
is a way to solve this one. 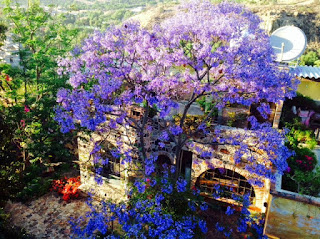 In the meantime, I'll continue to enjoy the garden while I can and head to town on Wednesday when I get the car back.

Wow, Babs! That tree is absolutely stunning. Thanks for sharing that. Robert

Well, everyone, a friend went on their computer to check to see what
address they got. It was not Cuahtemoc, but it was not Cuitlahuac either.

There was a place to highlight the error and to send the correct info.
we'll see what happens.........Onward.

You can also see what address is displayed on their GPS when they are in front of your house. Whatever is shows you should use when calling a cab.

GREAT idea Rick. The friend who first tried on her computer got "San Marcos-Chepitos" - wrong. Then she tried on her I Phone and got Cuahtemoc - wrong again! I'm hoping that sooner or later, the report I sent in will be acted upon and Cuitlahuac will be back on Google Maps! Hopefully.....

Isn't it sad how we love the Internet for all that it and modern technology can do, but dang it, it cannot be wrong!

At some point the satellites might be able to pinpoint my exact apartment. ;)

The Google Map thing, Scott, is an everyday thing for me only if I need a taxi or someone is trying to come to the house.....like when I DO have a furniture or garage sale. I sure hope they get it sorted out soon. There are photos on Google of not only the front of my house but a drone photo of the property! Yikes

I wouldn't hold my breath on Google fixing it. I once reported an error in StreetView in Mexico City and as far as I can tell, they never corrected it. In all fairness, it was in one of those places with an overpass, several levels of street, and it may have been particularly difficult to code.

I guess the fact that you're moving will make it moot soon enough.

Kim G
Redding, CA
Where it's virtually impossible to get lost.

Kim, it is a street that is a dead end street with only three houses on it. The other two are Mexican families and I have never seen them take a taxi. Luckily Escuela Montes de Oca, primeria, is across from my house and the taxis DO know that school and from time to time bring someone to the school.

Many of the older taxi drivers have retired and the younger ones depend now on their Iphone to find their way around. A BIG mistake.

You are right, I did receive a response from Google saying "they are looking into it" but of course, so far, nothing..........

The biggest problem is I have tons of furniture, art, accessories, etc to sell between now and the time I move. Along with a BIG yard sale.....It is going to be
very difficult to describe to all heading this way...... Aargh.